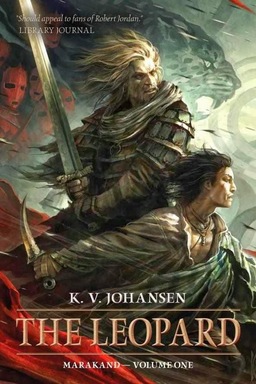 Lou Anders, editorial director of Pyr Books, may be the closest we have to Lin Carter in the field today: an editor with impeccable taste and boundless energy, who has also been a tireless champion for sword & sorcery. The latest he’s offering us is the opening volume in a new series from K.V. Johansen, the Canadian author of Blackdog (2011). Black Gate’s own James Enge blurbs The Leopard with a stylish tip of the hat to the great Harold Lamb: “I’m hooked. This mix of magic, Tibetan-style religion, and Harold Lamb-style adventure is pretty addicting.” Sounds pretty darn good to me.

Ahjvar, the assassin known as the Leopard, wants only to die, to end the curse that binds him to a life of horror. Although he has no reason to trust the goddess Catairanach or her messenger Deyandara, fugitive heir to a murdered tribal queen, desperation leads him to accept her bargain: if he kills the mad prophet known as the Voice of Marakand, Catairanach will free him of his curse. Accompanying him on his mission is the one person he has let close to him in a lifetime of death, a runaway slave named Ghu. Ahj knows Ghu is far from the half-wit others think him, but in Marakand, the great city where the caravan roads of east and west meet, both will need to face the deepest secrets of their souls, if either is to survive the undying enemies who hunt them and find a way through the darkness that damns the Leopard.

To Marakand, too, come a Northron wanderer and her demon verrbjarn lover, carrying the obsidian sword Lakkariss, a weapon forged by the Old Great Gods to bring their justice to the seven devils who escaped the cold hells so long before.

The Leopard is Volume One of Marakand. It will be published on June 10 by Pyr Books. It is 370 pages, to be priced at $18 in trade paperback and $11.99 for the digital version. The second volume, The Lady, is scheduled to arrive in December (see the cover here).

I snagged an ARC of this last week – definitely looking forward to the read.

i would kill for the ARC

well not kill but do something less objectionable like sell out my country :p

Well, I won’t be challenging Kim Philby to a trial by combat for the ARC, but that’s only because I have such a long and marvelous queue of ARCs already. This book looks positively delicious.

I won’t say that Pyr can do no wrong, but they’re certainly doing a heck of a lot of things right.

I have the ARC. Kim, what country are you willing to sell out? Maybe we can make a deal. (After I finish reading it, of course.)

[…] for adventure fantasy fans. Last month, while talking about the latest upcoming title from Pyr, I described Lou as “the closest we have to Lin Carter in the field today: an editor with impeccable taste […]

[…] success with the line many times over the years, and in my recent comments on K.V. Johansen’s The Leopard, I called Lou “the closest we have to Lin Carter in the field today: an editor with […]

[…] first novel in K. V. Johansen’s two book Marakand series, The Leopard, appeared in June from Pyr Books, and was widely praised. Even the esteemed James Enge was […]