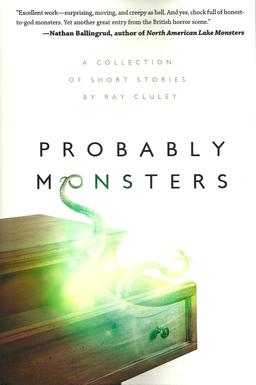 Toronto press Chizine Publications is one of the hottest publishers in the business. I was so impressed with their recent output that, after returning from the World Fantasy Convention in November of last year, I sat down to compose a survey of their catalog.

But it wasn’t just their 2014 releases that grabbed me. I was also highly intrigued by Probably Monsters, the debut collection from British Fantasy Award-winning author Ray Cluley, author of Water for Drowning (August 22, 2014). It was released in April, and I finally had a chance to get my hands on a copy yesterday, at the Nebula Awards weekend here in Chicago. I love a good monster story, and these look very promising indeed.

From British Fantasy Award-winning author Ray Cluley comes Probably Monsters — a collection of dark, weird, literary horror stories. Sometimes the monsters are bloodsucking fiends with fleshy wings. Sometimes they’re shambling dead things that won’t rest, or simply creatures red in tooth and claw. But often they’re worse than any of these. They’re the things that make us howl in the darkness, hoping no one hears. These are the monsters we make ourselves, and they can find us anywhere…

Probably Monsters was published by ChiZine Publications on April 14, 2015. It is 352 pages, priced at $16.99 in trade paperback, and $7.99 for the digital version. The cover art is by Erik Mohr, with design by Samantha Beiko.

They are really good. And while you can’t judge a book by its cover, their covers are often fantastic too.

There was a kickstarter for an Ellen Datlow-edited anthology that had a level that provided Chizine’s entire back catalog in ebook form (as of that time), and I pledged at that level. Ever since, I’ve done the annual “subscription” thing to get all their published ebooks each year—though I haven’t signed up for 2015 yet (I will, I will, just waiting for some larger bills to pass me by).

I’ve only been able to read a small portion of their output so far, but what I’ve read has been uniformly very good, sometimes excellent.

Chizine has some of the best cover design in the business. They’re blazing a trail others should follow.