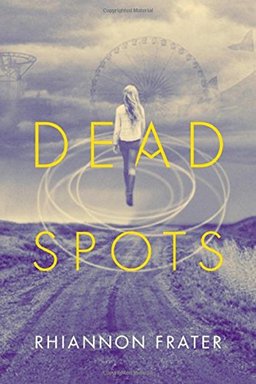 Rhiannon Frater’s zombie trilogy As the World Dies won her many readers, and in her Black Gate review Beth Dawkins called the opening volume, The First Days, “Very compelling… could be a zombie front runner.”  Now Frater returns with an original horror novel featuring dead spots in the world where dreams become reality, terror knows your name, and nightmares can kill you.

After a tragic stillbirth and a devastating divorce, Mackenzie has no choice but to start her life over. What should be a routine drive across Texas to her mother’s home becomes much more when a near-accident causes Mackenzie to stumble into a dead spot. Dead spots link the world of the living to the one of nightmares and dreams, where people are besieged by monsters and by situations born of highly personal fears.

Grant, her newfound companion, keeps her from spiraling into madness — he has survived decades in the dead spots’ dreadful landscape and vows that together they will find a way to escape. With Grant’s guidance, Mac uses her will and life spark to restore abandoned buildings to their former glory, creating sanctuary for a night, or a day, or a few hours. But there is little respite in the dead spots. Horrible, unnatural birds snatch at Mackenzie’s few, precious reminders of her dead son. Graves open beneath her feet, attempting to swallow her whole. A killer clown lurks in the forest, eager for new prey.

Worse, death is not final in the dead spots. Even if a monster tears her apart, Mackenzie is doomed to return.

Friction between Mackenzie and Grant blooms when he cautions her against befriending others trapped in this nightmarish realm, yet she cannot ignore those who desperately need her help. As she learns more about the world, Mac starts to question who she can trust — and worse, to wonder who is real. To escape the dead spots, Mackenzie will have to take a stand against her worst fears and fight to liberate herself and the survivors she’s come to care about.