The problem with gods isn’t just that they’re terrible parents, or that they’re bad luck to be around. Greco-Roman gods were bad news because, well, they were people. Which sounds nice and relatable until you think about some of the people you know.

They’re intense, passionate beings who are untempered by immortality. Which means they feel everything we feel – love, joy, anger, jealousy – but with the powers of a god to back them up.

This is most apparent in the stories of Zeus (Jupiter in Ovid’s works) and his many…. Well, some older editors call them “loves”. Some others call them “conquests”, which is a little better. For the most part, they’re victims, either of Zeus when he kidnaps them or his wife when she finds out about them.

One such victim whose story Ovid tells is Callisto. She was a sworn virgin, a friend of Diana who wandered with her in the wilderness. She spent all her time with her fellow virgins, hunting, fishing, and generally avoiding men and the role usually allotted to young women in the ancient world. Until Jupiter saw her and raped her. As if that weren’t bad enough, when she was discovered to be pregnant, Diana threw her out of her company. 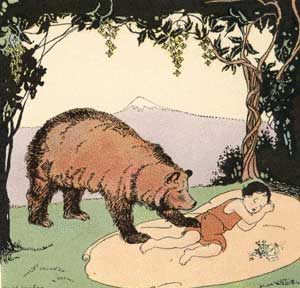 Then, to add insult to injury, after she has given birth to a son Juno, Jupiter’s continually put-upon wife, turns Callisto into a bear. She got off lucky: other women were incinerated (Semele), tormented with biting insects (Io) and cursed with semi-eternal labor (Leto). Turned into a bear… well, at least she could keep roaming the woods.

What happens next is the foundation for many a trope-tastic disguise and reveal story. The son of Callisto and Jupiter grows up to be a great hunter. One day, a great bear wanders into the sanctuary of Jupiter, and he is sent to slay it. The readers know, of course, that this is Callisto, but her son has no idea. Just as the boy draws his weapon and is about to kill his own mother, Jupiter swoops in and…

Turns the son into a bear as well. Then turns them both into the constellations Ursa Major and Ursa Minor.

Jupiter is really terrible. That is the worst rescue I have ever heard of. First off, where was he for the last twenty years? Could it not occur to him to intervene sooner? Next, what about, say, just turning Callisto back into a woman? Or appearing and saying “Don’t shoot it’s your mom!” Why does a 15 year old Scottish girl manage this series of events so much better than the king of the gods?!?

Then again, that would be less of a story, wouldn’t it. The myth’s purpose is to explain the stars, not confirm Jupiter’s benevolence.

That last is especially important here. Ovid has deliberately chosen a version of this tale that makes Jupiter look bad. Other tellings of the myth have Artemis turn Callisto into a beast for breaking her vow of chastity. So why make that choice? Maybe because it makes Jupiter look bad, and as we said before, the Augustan regime had chosen to closely align its image with that of Jupiter as ruler of the gods and Apollo as the god who establishes order. Maybe because Ovid likes to drive home, again and again, the destructive power of sexual violence. Maybe it’s a swipe at Augustus’ wife Livia, who associated herself with Juno. Or maybe he just enjoyed the idea of divine drama played small, of human foibles played out on a cosmic scale. 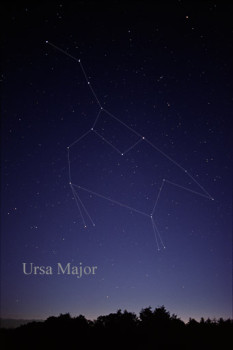 What we’ve gained from the story is a love of sudden reveals and reversals. This story is one example of the template that Shakespeare will use repeatedly in his works, and one that will be the foundation of every terrible romantic comedy ever. So think of Callisto the next time you watch a sitcom, or look up into the sky on a clear night.