The problem with gods isn’t just that they’re terrible parents, or that they’re bad luck to be around. Greco-Roman gods were bad news because, well, they were people. Which sounds nice and relatable until you think about some of the people you know.

They’re intense, passionate beings who are untempered by immortality. Which means they feel everything we feel – love, joy, anger, jealousy – but with the powers of a god to back them up.

This is most apparent in the stories of Zeus (Jupiter in Ovid’s works) and his many…. Well, some older editors call them “loves”. Some others call them “conquests”, which is a little better. For the most part, they’re victims, either of Zeus when he kidnaps them or his wife when she finds out about them.

One such victim whose story Ovid tells is Callisto. She was a sworn virgin, a friend of Diana who wandered with her in the wilderness. She spent all her time with her fellow virgins, hunting, fishing, and generally avoiding men and the role usually allotted to young women in the ancient world. Until Jupiter saw her and raped her. As if that weren’t bad enough, when she was discovered to be pregnant, Diana threw her out of her company.

END_OF_DOCUMENT_TOKEN_TO_BE_REPLACED

The title for Ovid’s Metamorphoses comes from the fact that every story he tells contains one. A metamorphosis, that is. While Homer begins his epics with Anger (in the Iliad and the Odyssey), Ovid begins In nova fert animus mutatas dicere formas / corpora… “I’m of a mind to tell you about bodies changed into new forms…” Sometimes those changes are incidental to the story, but at the beginning, Ovid is interested in the big changes. The great, cosmic ones. He begins by telling about the first change, from yawning chaos into the slowly increasing order of Creation. He tells of the first four ages of mankind, the Roman version of the Great Flood myth, and of Apollo’s conquest of the great Python.

That last should be a good story, but he speeds past it: Earth Angry, Giant Dragon-Snake thing, God with bow, boom. Festival commemorating mighty victory. Next!

He then tells the story of Apollo and Daphne. The first thing you need to know is this:

Apollo has no game. None. Zero. He is That Guy. He is always That Guy, and the one time he manages to get a boyfriend, said boyfriend ends up instantly dead because Apollo is The Worst.

We have our theories on why that may be, but that comes later. For now, just know this: if Apollo is interested in someone, girl or boy, it will end badly for her or him. And probably for the world at large.

So when he comes into Olympus fresh from killing a dragon and makes fun of Cupid for being a baby archer… well, let’s just say that disturbance in the force that you feel is two-thousand years’ worth of readers cringing and then smacking their faces with their palms. Cupid, after all, enjoys making gods fall in love with really embarrassing people.

END_OF_DOCUMENT_TOKEN_TO_BE_REPLACED 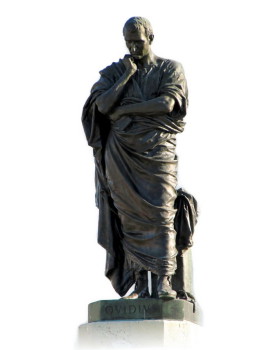 We’re kicking off the year (wrapping it up, technically, but since this is an introduction, we’ll elide the difference) with a return to form. I’m also giving myself a holiday present, because this? This is a work by one of my favorite authors of all time.

And when a Classicist says that, it really means something.

Ovid’s Metamorphoses were written under the reign of the Emperor Augustus. If we didn’t have solid dating on Ovidius Naso’s life (he was born on March 20, 43 BC and died sometime in 17/17 CE) we’d have this detail, because he and the first emperor of the Romans did not get on. Ovid ended his life in exile, in part because of his poetry (including the Metamorphoses) and in part because of…something. That something is one of the most tantalizing mysteries of the Augustan era. We know that Ovid did something that offended Augustus so deeply that he was sent to the very end of the empire and left there to rot. He writes in the Tristia (his book of poems written from that exile) that he was sent away for “carmen et error”: a “poem and a mistake”, but never reveals more.

Did he have an affair with Augustus’s daughter Julia, who was exiled for promiscuity? Did he have a part in a revolutionary plot, a role that was too vague for execution but too solid to be ignored? Did he make one joke too many? We don’t know, and it keeps me up at night. In all seriousness, if I ever wake up in the dead of night to hear that telltale whoosh-rattle-whoosh and a blue phone box appears in my garden, you will see me running outside in my nightie waving a copy of the Oxford Classical Dictionary and screaming “TAKE ME TO OVID!”

It would be for history, on my honor as a matron.