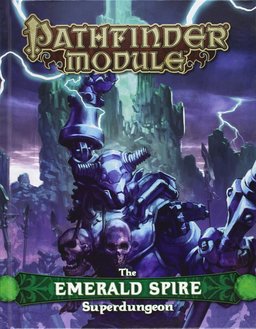 I’ve been playing AD&D with my kids and their friend Will a few days a month (yes, that’s first edition Advanced Dungeons and Dragons. It’s the only version I know how to play. Plus, used copies of the rules are still cheap.)

As I mentioned in my 2013 article, I’ve been gradually running them through Gygax’s classic adventure modules, and setting them on the Outdoor Survival map, just as Gygax used to do. Right now we’re in the middle of G2: The Glacial Rift of the Frost Giant Jarl, which is just as much fun as I remember it.

I mention this because they’ll soon be done with Gygax’s Against the Giants adventure modules, and I’ve been on the hunt for another epic adventure to involve them in. These days it’s superdungeons that get all the good press, and I can understand why. Nothing gets players excited like a truly epic adventure they can sink their teeth into.

I’ve been extremely impressed with the Pathfinder adventures I’ve purchased in the past — including the massive 420-page Rise of the Runelords, a gargantuan hardcover collection of the first six Adventure Path modules — so when I heard Paizo was releasing a standalone supermodule, I thought it would be worth checking out.

The Emerald Spire Superdungeon (yes, Superdungeon is part of the actual title — how cool is that?) was released last summer, and it’s as ambitious and as gigantic as I could have hoped. The dungeon spans a whopping 16 levels, designed by superstars like Ed Greenwood, Frank Mentzer, Michael Stackpole, Lisa Stevens, Sean K. Reynolds, and many others.

The dungeon is designed to take players from level 1 to level 13, with challenges that start with goblins and deadly traps, quickly escalating to the clockwork soldiers of a lost empire, and a forgotten master of creation. The book features seven new monsters, details on the nearby settlement of Fort Inevitable, and the history of the Spire and the surrounding territory (which also features prominently in the new Pathfinder Online massively multiplayer online game).

Here’s the complete description from the back of the book.

Secrets None Will Survive!

For ages untold, a gemstone monolith has pierced the heart of the Echo Wood. Now, as civilization intrudes upon this enigmatic splinter, a strange life once again stirs in the depths — one with ties to undying evils and a might beyond time itself. The promise of wealth and power calls to glory-seekers from across the Inner Sea region, tempting them into a labyrinth of monster-haunted vaults, defiled tombs, arcane laboratories, and worse, as they seek to unveil the secrets locked below the legendary Emerald Spire.

Pathfinder Module: The Emerald Spire Superdungeon is the largest adventure ever set in the world of the Pathfinder Roleplaying Game. Designed for characters of a wide range of levels, this megadungeon opens with challenges appropriate for 1st-level characters and can carry parties to 13th level or higher. Within this deadly super-adventure, you’ll find:

The Emerald Spire Superdungeon is intended for use with the Pathfinder Roleplaying Game and the Pathfinder campaign setting, but can be used in any fantasy game setting.

Typical for Paizo, The Emerald Spire Superdungeon has gorgeous production values, with top notch art, design, and color throughout. The book is cleanly laid out, and info is easy to find.

My curiosity got the best of me, and I bought a copy last week. I won’t know how well it stands up as a functional adventure until I try it out on my young gaming group. When I do, I’ll report back here with more detail.

The Emerald Spire Superdungeon was published by Paizo Publishing on July 15, 2014. It is 160 pages in full color, priced at $34.99 in hardcover. The cover is by Jesper Ejsing. Get more details at the website.

Curious, is it fairly easy to convert a Pathfinder adventure to old school AD&D?

The specific mechanics are built on D&D 3rd edition (or 3.5, more likely), but they’re tweaked out a bit beyond that. If you can convert 3rd edition, then I think that you should be able to convert Pathfinder.

Andrew is correct. If you’re comfortable converting between D&D 3.5 and AD&D, for the most part it’ll be manageable. You’ll lose things like feats and some of the spells, but a little creativity will see you through.

Paizo says the adventure “can be used in any fantasy game setting,” which is technically true – provided you’re willing to put in the work. 🙂

I commend your choice of editions.

I take it then that converting AD&D to D&D 3.5 is fairly easy.

When 3rd edition D&D first came out, Wizard published a conversion manual by Skip Williams. Here’s a link to the pdf: http://www.adnd3egame.com/documents/conversionbook.pdf

John, if such a link isn’t allowed, I’ll understand if it gets pulled.

It’s pretty easy, if you don’t try to replicate everything 1 to 1. A group of 10 orcs might be better made into a group of 6, and a stone golem perhaps be changed to a clay golem. But all the spells and magic items are essentially the same, so you very rarely get any trouble with obstacles and puzzles.

I’m starting to see why Pathfinder is so popular with old school D&D players!

As a player of both Pathfinder and older versions of D&D, I’d say Pathfinder is very very different than AD&D. I’m not saying conversion is impossible, but I wouldn’t call it easy. There are no HD for monsters in PF. They have Challenge Ratings that don’t quite match up to HD, so you’ll have to use AD&D stats for some monsters (not usually a problem), or come up with the stats for them yourself. Just be aware that PF is more scalable, and the power curve is much sharper (AC and Hit Points go way higher in PF). Feats can be difficult to equate to AD&D rules, and some monsters and characters have lots of them. Some of the lingo is different too, so you’ll probably want to look at the Pathfinder SRD to give you a hand in your conversions. Good Luck! Pathfinder in general has some great adventure paths that a worth a look.

Also, Check out Frog God Games. They publish lots of stuff and have books for both Pathfinder and Swords & Wizardry, a D&D clone. They have a mega dungeon called Rappan Athuk and sold as either a Pathfinder or a S&W clone. S&W is much much closer to AD&D.

Thanks for the link – that doc looks very handy indeed.

Thanks for the comment – and especially for the shout out for Frog God. Rappan Athuk is an amazing piece of work… I bought the original 3-part version from Necromancer Games a decade ago, and then the boxed re-release. I’ve never actually run it, though… if you have, I’d love to know how it turned out!