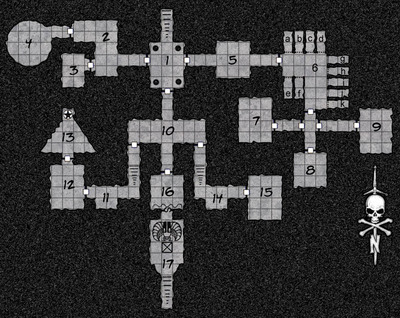 I discovered D&D when I was 12 years old. Typical, but that’s where typical ended. No friend/sibling/ cousin/teacher sat me down at a table with those early paperback rulebooks and oddly shaped dice. I didn’t get to see the rules or the dice. Come to think of it, there wasn’t a table.

I’d moved the year before, and a distant friend was visiting. Our families spent an afternoon together roaming a museum, and he and I were alone for part of that time. He spent about an hour telling me about this great new game he was playing, exploring a dark dungeon with his friends, facing all manner of evil. I remember only one fragment of his story: Their dwarven cleric had been slain. They had left the body behind, but were planning to go back for the dwarf’s warhammer, as they’d run into a bunch of skeletons and thought a smashing weapon might prove useful.

How many 12-year-old lovers of adventure fantasy could pass that up? Certainly not me, but I didn’t know where to acquire this wondrous game, and I had no one to play it with (nor would I for another 5 years). What to do?

Fortunately, I had picked up the notion of making board games from an older brother, so I plopped down on the floor and got to work. From my friend I’d heard about dungeon rooms and treasures and monsters and secret doors. I’d heard about wizards and magical weapons and healing potions. I’d heard about hit points and hit dice and armor class. And I knew they were all rolled into one game.

On an 8.5″x11″ sheet of 5-to-an-inch graph paper, I drew a scattering of rooms. I imagined the entire page was some kind of great underground vault with heavy doors at one end. In each room I put an X. This I envisioned as a pillar of some kind of dark amber or crystal that would melt away at the touch of a hand, revealing its contents. What might they hold? 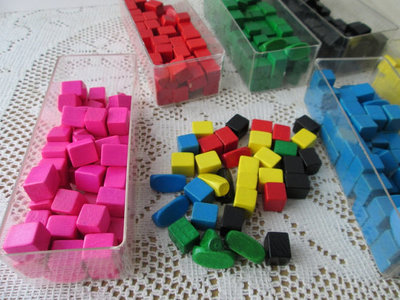 I cut up note cards to make a deck of cards. On a few I drew little pictures of and wrote stats for useful items. There was a magic sword, a magic bow, boots of speed, and a healing potion. Most of the cards were monsters. There was a wizard who cast magic missile, a pack of d6+4 tiny goblins who moved and attacked as a flowing pack, a spider with poisonous sting that slowed the victim, a black knight with heavy armor. There was The Monster, a five-hit-die monstrosity for which I drew only a mouth full of sharp teeth. There was a skeleton who took half damage from arrows, in honor of that “go back for the warhammer” thing, which I still think makes for a good story.

Then there was the great treasure, a chest full of coins and jewels. Extracting this from the dungeon was the goal, but it was heavy. It’d weigh down whoever carried it. Worse, when the great treasure was found, all remaining crystal pillars melted, and the chase was on!

Into this vault strode my heroes. There were six: Black, Blue, Green, Pink, Red, and Yellow — I’d raided the Risk game — each with a sword, bow, and 3d6 hit points. They would spread out through the vault, moving 2d6 squares every turn, searching the rooms for the great treasure, but the door to a room could only be opened at the beginning of a turn. An annoyance on the way in. Death on the way out if the hapless hero was trying to outrun The Monster.

Yes, the heroes always scattered to search the vault. Not because I came up with clever game mechanics to encourage this behavior. They did it because it made for good adventure. Where’s the fun of six heroes moving from pillar to pillar, beating the stuffing out of poor, solitary monsters? Even the big guy wouldn’t have stood a chance. 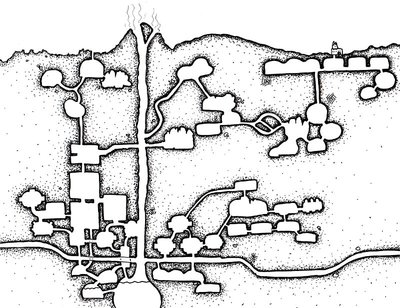 Once the great treasure was found, the chase was indeed on. The hero carrying it would make for the exit, his surviving companions trying to run interference. If one or two or all of them needed to stand their ground against a wave of monsters in order for the treasure to make it out, then by honor, that’s what they did!

If a monster managed to slay the carrier and grab the treasure, off it’d run for the farthest room, its lair-mates closing in around it in a swarm of tiny cardstock chits, each adorned with a letter or two. They gathered not for the heroics of saving the treasure, but for the sheer bloodthirsty joy of slaying heroes. Since some of those monsters could move at a pretty good clip — I seem to recall the wolf rolled an extra die or two for movement, although how it carried a chest of loot is anyone’s guess — best if the heroes didn’t let it happen.

That game gave me many, many hours of fun. I drew more dungeons, adding such innovations as shortcuts barred by secret doors that could only be opened by rolling a one, and rooms with multiple pillars, all of which would melt when one was touched, requiring that two heroes search the room together.

The game fell by the wayside a couple of years later. By then I had acquired blank counters and large sheets of hex paper, perfect for game creation. I worked on an epic game with several dungeons and forests and mountains and towns. I put a lot of time into it, but eventually shelved it unplayed when I realized there wasn’t much game in that game. It was missing the great treasure and the chase.

However, memories of my first effort persisted, and I recreated it in grad school during a slow semester. I got a few more hours of fun out of it, but it wasn’t D&D or any of the RPGs I’d played. Still, not a bad way to start.

Jeff Stehman’s last article for us was BattleLore: You Got Your Goblins in My Hundred Years War!.