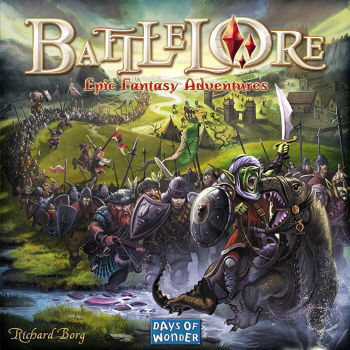 When I set up our first game of BattleLore (no easy task), my wife wasn’t in the room. The game ready, I said, “Do you want to play the French or the English?”

I know my wife so well. Still, I’m not a complete bastard.

“It’s the battle of Agincourt.”

Pause. “Maybe I can change the outcome.”

She did and decided this was a strategy game for her. Stepping back even further in time, she proceeded to stomp me at Chevauchee and Burgos. A funny thing happened at Burgos, though. I brought goblins to the party. They were eager to charge into battle, eager to flee. The latter was my undoing. Failing to provide a clear path of retreat for units that retreat with haste can be… messy.

Dwarves then weighed in on the side of the French, and eventually a giant spider showed up, first for the French, then the English. (Fickle creatures, arachnids.)

[Click on any image in this article for a bigger version.]

BattleLore is a light two-player wargame/boardgame (depending on your school of thought) created by Richard Borg. Like Memoir ’44 (WWII) and Battle Cry (Civil War), BattleLore uses the Commands and Colors system. It was released by Days of Wonder in 2006 and moved to Fantasy Flight Games in 2008. 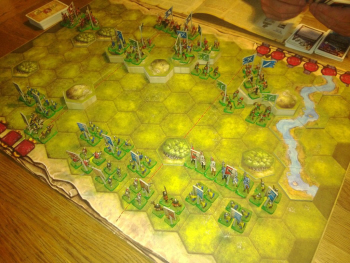 Armies are represented on the hex board by miniatures, three or four to a unit. One miniature in each unit carries a banner indicating which side the unit is on and what color the unit is. The color equates to light, medium, or heavy troops.

There are a lot of little rules in the game, what with mounted troops and infantry and bowmen and crossbowmen and terrain effects and morale and battling back and follow-on actions. However, the ten-scenario campaign that comes with the game does a good job of building player knowledge as it progresses. Each player has a set of rule summary cards which should make referencing the rule book a rarity once the game is learned.

The two primary mechanics are command cards and battle dice. In a typical scenario, each player will have four to six command cards in their hand. On their turn, they play one card and they draw to fill their hand at the end of their turn.

Typical command cards indicate in which section of the board the player can issue orders and how many units can be ordered, e.g. two units on the right or three units in the center or one unit in each section. There are also special cards, like ordering one green unit anywhere on the board for every command card in the player’s hand, or my favorite, “Darken the Sky,” which allows all of a player’s ranged units to attack twice. (Always ominous, rarely effective, at least when I’m rolling.) 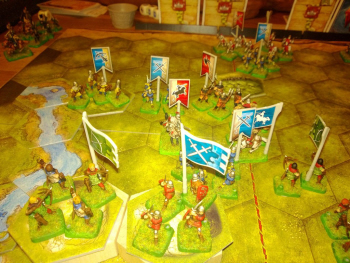 A hit is marked by removing one of the defending unit’s miniatures from the board. The last miniature removed from a unit is the one carrying the banner, which the attacking player keeps as a trophy. Being shorthanded has no effect on a unit’s ability to fight, but victory is achieved by capturing a certain number of banners, so players have a strong incentive to pull weakened units from the front line.

With everything up to this point, I put the game at about 50/50 luck/strategy, which is where my wife likes it. But midway through the introductory campaign, the game gets a serious entropy boost. This comes with the introduction of the wizard, the warrior, the rogue, and the cleric. These are not units on the battlefield. They’re members of each player’s war council.

With their arrival, the players are now collecting and spending Lore to play lore cards alongside their command cards. Some lore cards are cheap, like the cleric’s Stone Skin, which allows a defending unit to ignore one hit from one attack. Others are expensive, like the rogue’s Sneak Attack, which allows one unit to move, attack with a bonus, and move again. Lore cards swing the game more toward luck.

I was so happy the first time I drew the wizard’s Fireball card. It has the potential to eliminate an enemy unit in one swell foop. I scrimped and saved and passed on opportunities, hoarding my Lore until I could afford to use this expensive card. I targeted a healthy unit far from the front line. I rolled the dice and… it fizzled out. The enemy unit applauded the show. I cried. 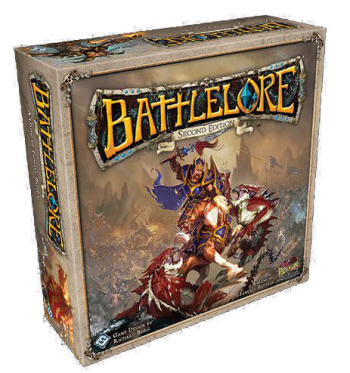 This game is fun and fast once you learn it. The rule book is gorgeous and while the miniatures won’t rock your world, they’re clear and stable. Several expansions were made and there are a lot of scenarios available online.

However, there are some negatives.

Set up is estimated at 10 minutes. With two players who know what they’re doing, a battle will only take 30-45 minutes. That’s a poor set-up/play-time ratio. And all those miniatures are kind of a pain to shuffle around the board in units.

Putting the game away is no picnic either. It comes very efficiently packed in a surprisingly small box. If you don’t repack it just so, the lid will not close all the way and that’ll nag at the back of your mind until you get it sorted (unless that’s just me).

Finally, although the rules break down nicely into discrete pieces, ambiguity plagues the writing. Reading the online FAQ for the game is a must.

In 2013, Fantasy Flight released BattleLore 2nd Edition. I haven’t played it, but from what I’ve read, units are more individualized, which I suspect means there’s more fiddly bits. It also uses larger and fewer miniatures, which should help address some of my negatives. Instead of an alt-history game, 2nd Edition embraces fantasy and joins Runebound and Descent in the world of Terrinoth. And rather than following set scenarios for each battle, there’s a scenario generation system, with players recruiting and placing their armies in secret.

BattleLore is a lot of fun, but weighed down by the setup time and moving groups of miniatures around, I’m not sure if I’m keeping it, so BattleLore 2nd Edition is definitely one I’ll have to try before I buy. If anyone here has played 2nd Edition, I’d love to hear about it in the comments.

Jeff Stehman’s last reviews for us were Magic Realm and Runebound.

Cool stuff, Jeff (don’t suppose you painted those BL minis in your photos?)

I’m a big fan of the C&C Ancients engine this is based on, but have only played BL 1st ed once or twice. I haven’t played second edition, but it seems to have completely thrown out any historical basis and focused more completely on fantasy elements (which I think is a good thing). Has bigger hexes, and interesting mechanics for blind deployment (unit cards that fit face down on those bigger hexes) and more emphasis on custom army generation.

The C&C rule set makes for fun games that aren’t so difficult to grasp, and scratch the mini gamers itch. Ancients seems by far the most suited to the rules, but I’m biased as it’s also my favorite period, and neither WWII or the fantasy sets really feel as right to me based on the mechanics (the Ancients set place more emphasis on maintaining a line, and leadership).

I have yet to try the Napoleonic, Civil War, or Sengoku Jidai sets, all of which seem to have interesting rule variants (Nappy has unit’s firepower degrade when they take losses, for example). I felt fantasy was fairly swingy, spells/magic points adding to the randomness of the ‘fistful of dice’ nature of the game, and the fantasy elements themselves seemed less interesting than the historical. I imagine second ed. would rectify that somewhat with a stronger theme.

Bill, no mini painting for me. Mine are au naturel gray.

Formation matters in BattleLore 1s Ed, but primarily in the number of friendly neighbors a unit has, line of site for archers, and the importance of leaving an avenue of retreat. I know at least some of that is changed in 2nd Ed, but I don’t know what the changes are.

I’d hope that the larger and fewer miniatures in 2nd Ed would make setup and troop movement easier. Plus since setup is part of the game, that should ease the pain some.

I recently purchased the second edition but i’ve only had time to glue the miniatures together. (only some of them need put together and they’re pretty simple.)

I’ve tried Memoir ’44 and that was average.

Bill, I’ve heard that C&C Ancients is the best the system can offer.

[…] BattleLore: You Got Your Goblins in My Hundred Years War! […]

Jeff: coming as an app!