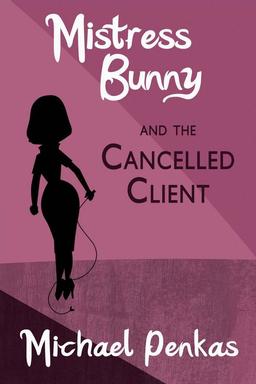 When I discussed his short story collection Dead Boys last year, I said the following about Michael Penkas:

Michael has an uncanny ability to pry open your heart with sparkling prose, humor, and warm and genuine characters… and then drive a cold spike through it with relentless and diabolical twists. All with some of the most compact and economical prose I have ever encountered.

After getting dumped by her boyfriend, Mistress Bunny cancels her six o’clock session so that she can cry and drink herself to sleep. When she learns the next day that her client was found dead in his office, shot in the head at the same time she should have been tying him up, she can’t help but feel a little responsible.

If you’d like a taste of the twisted sense of humor on display in his novel, try Michael’s chilling and hilarious biblical fantasy ”The Worst Was Yet to Come,” published right here at Black Gate. Mistress Bunny and the Cancelled Client was published on November 6, 2014. It is 208 pages, priced at $15 in trade paperback and $5 for the digital edition. The cover is by Viola Estrella.