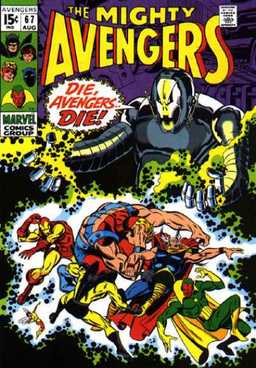 All work at the rooftop headquarters of Black Gate came to a standstill this afternoon, due to the surprise release of the first teaser trailer for Avengers 2: The Age of Ultron.

Now, this doesn’t happen for just any trailer. (At least, not those that aren’t Star Trek-related). However, we are big fans of the Avengers, both their comic incarnation and the Joss Whedon movie.

Did you know Ultron was built by Henry Pym, also known as Ant Man? Okay, everybody knows that. How are they going to ret-con that into the movie continuity, given that the Paul Rudd Ant Man movie doesn’t come out until July 2015, two months after The Avengers 2? No one knows. I’ve looked for any trace of Rudd or Henry Pym in the IMDB cast list, but no dice.

As cool as Ultron is, of course, his creation The Vision (first appearance: Avengers 57, 1968) is even cooler. According to IMDB, the Vision does appear in the movie, played by Paul Bettany (who also plays the voice of Tony Stark’s robot assistant, Jarvis. Coincidence? I don’t think so.)

Anyway, check out the trailer below. There’s all kinds of mysterious individuals and brief glimpses of cool things, including Quicksilver and the Scarlet Witch (first glimpsed in the end-credit hidden scene of Captain America 2), and Tony Stark’s hulkbuster armor. We’ve watched it 134 times, but maybe you can catch things we haven’t. Enjoy.

As a long time Avengers fan—two small corrections if I may. Issue #1 had Loki dissing our new found illustrious team and Thor replying. Issue #2 has the Wasp warning that the Hulk is reallu the Space Phantom about to attack Iron Man still wearing his original golden armor. Issue #16 has Captain America calling the new team together with the classic Avengers Assemble cry. So Ultron indeed gets credit for the first machine to do cover copy. No offense intended you guys have me beat in the fantasy department any day of the week.

You are entirely correct. I used the marvelous Avengers Cover Browser to do my (what we’ll loosely call) “research,” starting backwards from issue 67, and obviously my eyes had started to gloss over by the time I got back into the lower teens. All those marvelous Kirby and Sal Buscema covers… clearly, my brain was incapable of taking it all in.

Still, there had been no talky-talky on the cover of the The Avengers for nearly five years by the time Ultron spoke the immortal words “Die, Avengers, Die!”, so we’re still going to credit him as an innovator. Just try and take that away from him.

I really liked the creepy “I’ve Got No Strings” from Pinocchio playing in the background. Good use of Disney copyright library.

It’s German! For “The Avengers! The”

I’m a little bit frightened by how much sense that makes.

According to IMDB, the Vision does appear in the movie, played by Jude Law

According to IMDB, the Vision/Jarvis is played by Paul Bettany.

Whoops! You are entirely correct. Memory — it’s a tricky thing. And sometimes, it’s an idiot.