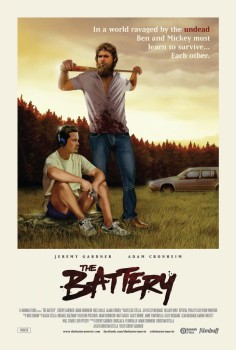 As Black Gate‘s resident oddball zombie movie reviewer (Honest! John O’Neill did it in style of Mad Men‘s Roger Sterling, he did a Jedi hand wave and anointed me thus) I have to say a little bit about the ultra-low budget 2012 movie The Battery.

Now don’t get me wrong, I love a traditional zombie movie as much as the next fan. I have a soft spot in my heart for 2008’s Day of the Dead, despite such howlers as the assertion that zombie Bud is safe because he was a vegetarian in life, as though that moral choice trumps thousands of years of cultural conditioning toward a similar moral choice against cannibalism.

But back to The Battery. Filmed on a budget of $6000, writer/director Jeremy Gardner put together a horror film that delivers the most entertainment per budget dollar since Blair Witch Project — though I expect The Battery, while not as original as that legendary effort, will prove more enjoyable on the re-watch.

Its strengths are the same as Romero’s original Night of the Living Dead: a limited budget means you have to spend your time on character and tension. Without money for a lot of extras in zombie makeup to be featured more than briefly, you have to make do with the sounds of zombies outside the windows, which is creepier anyway.

More character study than run-and-gun zombie fare, this film stars our writer/director, pairing him with co-producer Adam Cronheim, as Ben and Mickey, a pair of minor-league baseball players who were on the road with their team when the zombie outbreak hit.

All the usual zombie fare, like the outbreak and Mickey’s desperate but futile search for his girlfriend, are backstory. This is strictly post-apocalypse, taking place many months after the zombies hit. The pair are surviving by keeping to the backwoods of New England, avoiding population concentrations and even abandoned houses, though they do make use of cars and roads when they can find gas.

Bearded Ben, the first-string catcher, is pulling most of the survival weight, making decisions that have kept them alive and “watching both their backs,” as he complains about Mickey’s constant retreat into his headphones and portable CD player. Mickey frequently bleats about having to sleep outdoors or on a roof somewhere — Ben likes opens spaces because he has a horror of being trapped again, an incident from months ago that becomes more and more important as the story progresses.

The two aren’t particularly suited for each other, but they were teammates, and they’re clinging to the familiarity of their association. At times, they seem like an old married couple who are a little tired of each other, at other moments a cracked relationship ready for the final break.

Their roadshow wanderings finally begin to resolve through two events. First, Mickey starts to have on-again, off-again radio contact with a female voice from a fellow group of survivors at a mysterious location designated by its residents “The Orchard.” His unseen conversationalist is tantalizing-in-tone but discouraging-in-discourse. For Mickey, who misses women, a clean bed, but especially a combination of the two, “Annie” at the other end of the two-way conversation becomes an obsession.

Second, Mickey’s first kill of a zombie (Ben calls it “finally getting on the board”) at a uniquely vulnerable moment causes him to take his role as Ben’s survival partner more seriously. He gives up on his headphones and starts taking Ben’s advice.

I’ll admit, while I liked it, this may not be everyone’s cup of tea. Even for me, it dragged here and there. I suspect hardcore zombie fans will either love it as something fresh, or hate it as the equivalent of a Dostoyevsky essay put on film, despite the nail-biting climax. I think it’s the best thing to happen to the genre since Pontypool.

The Battery is currently a selection on Huluplus, which is offering a free month of service for new signups.

Personally, I’m hoping for a sequel: “The Orchard.”

Great find! You were dead right about PONTYPOOL… this looks like another one I’ll have to check out.

Just watched The Battery and Pontypool within the last 18 hours and found both of them fantastic character studies, which the best zombie tales often are. The Battery I’d been meaning to watch, but I’d never heard of Pontypool before this post, so thanks, ee.

Of the two, I lean toward Pontypool being the better film overall, but it’s also the more traditional and somewhat acceptable to the viewing eye (though it feels weird to say that considering the unique qualities of the film).

Since the idea for a sequel for The Battery was brought up, a couple of thoughts come to mind. For one, did anybody else notice the scenes in an actual orchard? That can’t be coincidence. And despite having a car, Ben and Mickey must not have traveled very far (at least within the visual timeline of the movie), because this Annie chick is all over the place.

Yeah Ty, that just shows what a strong movie “The Battery” is. Pontypool, while not high-budget, was studio-backed. The Battery was shot for next to nothing, yet you can argue the strong and weak points of each without a yawning chasm of professional film-making separating them.

Going to have to check this out. I love Pontypool so this sounds like it’s more than worth a shot.

Just watched Pontypool. Awesome movie, so that’s for that.

You’ve sold me on both The Battery and Pontypool. That’s saying something, since I’m not generally a horror fan. The big CGI movies don’t offer much more than a chance to poke my amygdala with a stick.