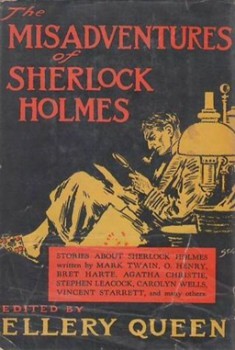 You’ve probably heard the name ‘Ellery Queen,’ but you may not know that it’s actually the name for joint efforts by cousins Frederic Dannay and Manfred Lee. They were important players in the mystery field for decades, with Dannay being a notable Sherlockian.

In 1943, Dannay planned The Misadventures of Sherlock Holmes, an anthology of parodies and pastiches. Unlike today, Holmes anthologies were unheard of back then. Due in large part, as we’ll see, to the management of the Doyle Estate by Sir Arthur Conan’s sons, Adrian and Dennis.

The book, by Ellery Queen, was unveiled at a Baker Street Irregulars gathering in 1944. I gave a taste what dealing with Doyle’s two sons could be like in my post on “The Man Who Was Wanted.” There’s more of the same in this tale.

Adrian heard about the collection and went off in his usual rage, telegramming his brother Denis (also a wastrel) in Spain. Denis cabled the Estate’s law firm and instructed them to demand that Queen and the publishers, Little, Brown and Company, stop publication and withdraw all copies. They were also to be sued for damages.

To quote Denis’s cable to the lawyers: “It is obviously a flagrant example of that very sort of piracy, striking at the very roots of the literary value of the property which my father left to his family, against which we have fought together in the past…books which will completely devaluate and ruin the whole value of the Holmes property, including films, radio and stage.”

There is more blathering by both brothers about the great damage and disgrace being heaped on their father’s legacy by this collection: “most reprehensible attempt at literary piracy,” “plagiarism,” “financial ruin of our valuable literary estate,” and royalties would flow into the pockets of “every plagiarist and literary trickster who cares to make full use of world famous characters created by my father…”

Apparently the legal feedback to the Doyle brothers was less than encouraging and they shifted their emphasis towards getting some kind of “token royalties.”

However, the Doyles lashed out (their typical response to everything) at The Baker Street Irregulars, telling them that there were to be no books or articles involving Holmes or Watson published without their express permission. Likewise, a threat of going to the Supreme Court was made to Little Brown and Company with the same admonition.

Queen had previously used a Holmes work without getting the proper permission from the Doyles and this weakened their standing on this issue. Queen agreed to a $500 payment to the Estate and an apology, which would settle all matters. Denis insisted no further editions of The Misadventures be published. However, Adrian vetoed the agreement because it would allow the current edition to continue being sold.

The Doyles were prepared to go to court: Little, Brown and Company however, was not. The publishers agreed to pay $1,000 and to stop publishing The Misadventures as well as the previous book with the copyright issue. They were allowed to sell the 388 copies still on hand, but the book could never be issued again. Nor has it been. The original print run of 13,564 seems to be final.

The Misadventures included “The Adventure of the Norcross Riddle,” by August Derleth. This was the first new Solar Pons story in over a decade and brought the Sherlock Holmes of Praed Street back to life. Or at least to Derleth’s pen. Pons is an Edwardian edition of the great detective and as true a successor as we’ll ever see.

Derleth would write over a dozen new Pons stories in the next two years and prepare a collection: In Re Sherlock Holmes: The Adventures of Solar Pons. However, despite enthusiastic support from folks like Dannay, Vincent Starrett, and Anthony Boucher, Derleth could not find a publisher. Though several were interested, they were not willing to battle the Doyle brothers after The Misadventures adventure.

Derleth already had his own publishing company, Arkham House. He added the Mycroft and Moran imprint and printed it himself. Now the Doyles would have to bully him. And August Derleth didn’t bully easily! 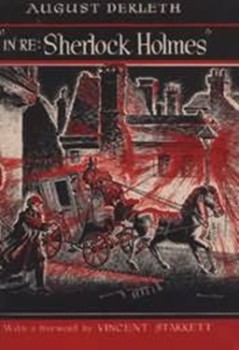 The collection was published in 1945 and the following year, the Estate’s lawyers sent Derleth a letter, demanding that he immediately drop the book, which they referred to as an unlawful and unauthorized use of the Holmes property.

Derleth was unfazed and ignored the threats. He corresponded with several notable Sherlockians and was confident of his standing. Of the Doyles he said, “…the dog in the manger attitude of the Doyles is disgusting; here we have a spectacle of a couple of lazy louts simply existing on their father’s work. Doyle himself was always very gracious…”

Derleth astutely noted that if the Doyles sued and lost, Holmes could be declared in the public domain and their gravy train would dry up. “The plain fact is that the Doyle sons are a pair of lazy bastards who have tried to eke out a complete living from the process of their father’s writings.” That sounds about right.

Derleth continued selling the books and would eventually publish over sixty Pons tales. While the Doyles had stopped The Misadventures, that collection had revived Solar Pons and they were unable to stop August Derleth.

Over fifteen years after The Misadventures, Adrian was still gloating: “The great majority of the stories contained therein were well calculated to damage the high standing of the Holmes stories which are acknowledged to be literary classics and are included in the Oxford ‘Classics of English Literature.’

I ran into my own experience regarding fear of the Doyle Estate in the 2000s. With John Gardner’s permission, I had written a pilot episode and pitched a British tv series based on his excellent Holmes pastiche, The Return of Moriarty. With a referral from an author on screenwriting in hand,  I talked to a well-established agent in England. A client of his had run afoul of the Estate on a Holmes project and he wanted no part of anything to do with the great detective.

It’s Elementary – This volume has nothing to do with a goofy 1991 collection by the same name. That one did have a Solar Pons story: a parody called “The Adventure of the Snitch in Time,” a time-travel parody written by August Derleth and Mack Reynolds.

Because Sherlock Holmes was still under copyright through the seventies, there simply weren’t anthologies of other authors writing stories of the great detective.

I remember buying The New Adventures of Sherlock Holmes when it came out in the late eighties. It was a big deal, even if the collection was pretty uneven.
http://www.amazon.com/The-New-Adventures-Sherlock-Holmes/dp/0881844357

Martin Greenberg would go on to work with a couple different co-editors on several more anthologies in the nineties and early 2000s. Now, with self-publishing and small market presses, there is a plethora of Holmes anthologies out there.

But back in the early forties, this type of thing was a real rarity.

It’s odd to hear that August Derleth stood up to the estate of Arthur Conan Doyle in this way when he (and, later, his estate) so infamously claimed control of Lovecraft’s works and tried to prevent others from using them. I always thought he was just ignorant, but it seems like he was just a major hypocrite.

@Zoinkin
I’m more in the “Derleth and Wandrei kept Lovecraft from disappearing into obscurity by founding Arkham House to get his books in print” camp myself.

As for Derleth’s Cthulhu pastiches, I like my Lovecraft on the less dark side, so I don’t mind them.

Having said all that, I’ve read a fair amount of Cthulhu, but I’m only a mild fan and certainly not an expert.

The Supreme Court says “no thank you” to the Doyle Estate. on November 3.

[…] Derleth, best known for founding Arkham Press and keeping the works of H.P. Lovecraft from fading into obscurity, would continue writing about Pons until his death in 1971. I’ve posted about how the Doyle sons tried to prevent the publication of the first collection, In Re: Sherlock Holmes, The Adventures of Solar Pons. […]

[…] The Misadventures of Sherlock Holmes was published in 1944 then allowed to go out of print, due to legal threats from the Arthur Conan Doyle estate. Never reprinted — twenty-five years ago in The Game Is Afoot, which contains about a third […]

My favourite is sherlock Holmes he is best

I just stumbled across this post, which I enjoyed, and wonder if you can tell me your sources for the Doyle cables and Little, Brown print run. I’m working on a short essay and would find these sources useful. Thanks!