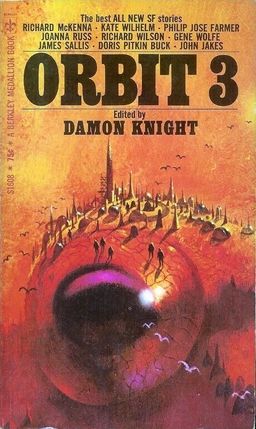 Plus, they’re cheap. In any decent used bookstore, you can usually find at least one or two old SF anthologies priced less than a buck. (If you’re not sure what a “used book store” is, exactly, never mind. It’s even easier to find cheap anthologies on eBay, if that helps you.)

I admit I haven’t tried very many of Damon Knight’s Orbit volumes. But after making my way through most of the major SF anthologies of last century — The Hugo Winners, the Science Fiction Hall of Fame, Before the Golden Age, Dangerous Visions, the Carr and Wollheim’s Year’s Best volumes — I think I’m ready to branch out a bit.

While Orbit routinely showcased some of the finest science fiction and fantasy writers of the 20th Century — including folks like Gene Wolfe, R. A. Lafferty, Philip Jose Farmer, and Knight’s wife, Kate Wilhelm — it also had something of a reputation for being on the cutting edge of the controversial New Wave. It wasn’t at all unusual to find readers loudly deriding the sometimes plotless, experimental fiction within, or criticizing fiction they disliked in letters columns around the industry as “too much like that Orbit stuff.”

Nonetheless, the series was quite popular. It ran for 21 volumes (not including a huge Best of Orbit collection) from 1966 to 1976, and helped cement’s Knight’s reputation as one of the best editors in the field. He took a lot of chances with Orbit, both in the fiction he chose and the authors he championed, but over and over again it seemed to pay off. While most editors worked hard to attract big names, Knight seemed to think nothing of having three quarters (or more) of his table of contents staffed entirely with newcomers. It must have made it difficult to attract buyers, but it certainly kept the series constantly fresh.

One of my favorite artists of all time, the great Paul Lehr, provided the covers for the paperback editions of Orbit. As abstract as much of the fiction, Lehr’s artwork for the first dozen or so featured miniature planetoids, and the image at left is no exception. For what seemed like a rather narrow artistic theme, Lehr still managed to produce wildly different covers for each volume.

We’re going all the way back to Orbit 3 for this column, because I feel like starting near the beginning. And because this is the volume I found most recently, in a jumbled collection of paperbacks I bought on eBay for less than 40 cents each. And especially because the marketing blurb on the back calls this one “the third and most bizarre volume of the exciting new Orbit series.”

Here is the third and most bizarre volume of the exciting new Orbit series — a superb and uncanny collection of SF stories, appearing for the first time in paperback, by the finest of today’s SF writers.

Well, you can see why he was successful. “Mother To the World” is a Nebula winner, perhaps hasn’t aged well, but was pretty enjoyable. As I recall, “The Planners” also won a Nebula.

“The Barbarian” is a great story, probably my favorite in the book.

So, really, having three first rate stories is enough by itself, and that doesn’t count a very late McKenna story (that I think was pretty good) and a pretty good early Wolfe. I don’t recall the other stories, though.

Only two writers who could be called new: Sallis and Wolfe, and even they weren’t brand new by then.

Orbit, in my opinion, was very good until almost the end of its run, only running off the rails a bit for the last couple of volumes maybe.

I take back what I said about the last issues of Orbit. Orbit 21 was pretty weak (though including a pretty good KSR story), but Orbit 20 included one of the greatest SF novellas of all time (“Seven American Nights” by Gene Wolfe), as well stories by Kate Wilhelm, R. A. Lafferty, Pamela Sargent, and such interest names as Steve Chapman, Ronald Anthony Cross and Philippa C. Maddern.

Orbit 19 included another very good KSR story (“The Disguise”), and a very good John Varley (“Lollipop and the Tar Baby”), plus Wilhelm, Lafferty and Wolfe (all very regular Orbit contributors) as well as the likes of Eleanor Arnason and Kevin O’Donnell, Jr.

And so on, back into the past … Orbit was really consistently an excellent and adventurous anthology.

I found Knight’s Orbit anthologies to be very uneven. Some great stories in every issue, but also some very furry dogs. In mt opinion, Knight tried to push the ‘New Wave” a little to hard. I thought Terry Carr’s Universe and The World’s Best(with DAW) were more even anthology series. Also Silverberg’s Alpha & New Dimensions.

Though, I have to agree with Rich about “The Barbarian”. That and “I Gave Her Sack and Sherry” from Orbit 2 were brilliant.I’m not a huge Russ fan, but when she nailed it, she really nailed it.

One name stands out on that table of contents as being pretty honking unexpected.
John Jakes?
I like a lot of his work but I never would have thought to find him in these anthologies.
Anybody read the story?

> Well, you can see why he was successful. “Mother To the World” is a Nebula winner, perhaps hasn’t aged well, but was pretty enjoyable.
> As I recall, “The Planners” also won a Nebula.

Wow! I hadn’t realized. But you’re absolutely right — both “Mother To the World” and “The Planners” won Nebula awards that year. That’s astounding for a single anthology.

When I first opened the book and glanced at the table of contents, I almost changed my mind about blogging about this one, because I didn’t recognize any of the stories. Glad I didn’t. 🙂

ORBIT was something of a Nebula award machine, especially in its early years. Just two years later in 1971, in fact, there was only one Nebula nominee for short story that WASN’T published in Orbit (Harry Harrison’s “By the Falls,” which appeared in IF).

Three of the nominees for Best Novelette came from Orbit that year, too. If you were interested in the best fiction of the year, you could ignore most of the magazines and just read ORBIT, it seems.

It’s rather amazing, isn’t it? He’s still as productive as ever — his novel THE LAND ACROSS just appeared last November.

> And so on, back into the past … Orbit was really consistently an excellent and adventurous anthology.

Indeed. I hadn’t realized “Seven American Nights” first appeared in ORBIT, actually. I first ran across it in a Tor double in 1989, paired with Robert Silverberg’s “Sailing to Byzantium’ (which won the Nebula for best novella in 1986).

“Seven American Nights” was also nominated for a Nebula, in 1979, but it lost out to John Varley’s “The Persistence of Vision.”

> In [my] opinion, Knight tried to push the ‘New Wave” a little to hard.

You’re in good company there… I’ve heard that complaint about ORBIT a few times. But it’s hard to argue with Knight’s success… he made ORBIT the most prestigious anthology in the field fairly quickly, and it stayed that way for many years.

I’m probably most familiar with Silverberg’s ALPHA series, and I have to agree, they were excellent. However, ALPHA was also a reprint anthology, which meant it wasn’t nearly as risky as an original anthology like ORBIT.

> One name stands out on that table of contents as being pretty honking unexpected.
> John Jakes?

I know what you mean! I was surprised to find him on the TOC as well. At this point John Jakes was mostly writing sword & sorcery (BRAK THE BARBARIAN appeared in 1968).

> Anybody read the story?

Not yet, but I hope to get to it this weekend.

[…] a collection of vintage paperbacks on eBay for around 50 cents each (the same collection I found Orbit 3 in, which I wrote about on Wednesday.) You never know what you’re going to find in these […]

There’s no question that ORBIT could be very uneven … that Knight would take risks and sometimes that just plain didn’t work.

That said, NEW DIMENSIONS and UNIVERSE were also both exceptional anthology series … I’d have a hard time choosing betweeen the three (ND, U, and O).

(Of course, I cover a lot of this history of original anthologies in an article that appeared at SF Site, thanks to John, many years ago …)

Rich — it’s very true that anthologies tend to be judged by their best stories, not the number of stinkers, and I think this is as it should be.

> (Of course, I cover a lot of this history of original anthologies in an article that appeared at SF Site, thanks to John, many years ago …)

I almost forgot about that! That’s a terrific article that’s still worth reading today:

Note that the article is in three parts, and there are links at the bottom to parts II and III (The Prolific 1970s and New Writers Only).