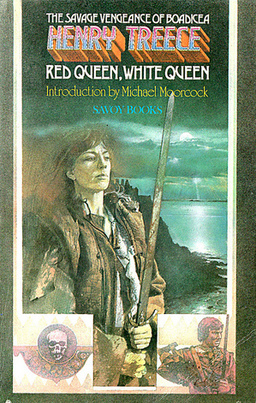 The setting for Henry Treece’s Red Queen, White Queen (1958) is Britain in 60 AD during the bloody uprising of Queen Boudicca of the Iceni against the Romans. RQWQ is the third book in his Celtic Tetralogy. I reviewed the fourth book, The Great Captains, his down-to-earth vision of King Arthur, last year. The other two volumes are The Golden Strangers, about the Copper Age settlement of Britain, and The Dark Island, set during Caractacus’s war against Rome.

Gemellus Ennius, a young Roman junior officer, has been transferred to Britain after five years’ service in Germany, arriving just after the onset of Boudicca’s revolt. Already she has burned the towns of Camulodunum, Londinium, and Verulamium, killing over seventy thousand Romans and allied Britons.

When her husband died, he left his kingdom to Boudicca as well as to the emperor, in contravention of Roman laws. Not only did Rome refuse to recognize the will, but it sent soldiers to beat her and rape her daughters. Then the moneylenders called in the tremendous debts her husband had incurred and enslaved the Iceni. Boudicca became a ferocious creature forged by the cruel hands of Rome.

… Boudicca strode towards them a couple of paces and stood, her legs wide apart, staring down at them, from the wooden dais by the altar.

A short brown frieze jacket laced with thongs held her heavy breasts. From waist to ankle her legs were encased in tight-fitting trousers of deer hide. Her feet were bare and rather large. Gemellus noted that they were very red and calloused, not like the dainty feet of the Lady Lavinia, for example.

And as the Red Queen moved, the golden armbands that pinched in the thick muscles gave her an appearance of richness and of strength, of an immense power, hardly feminine, but yet not male. She resembled a statue Gemellus had once seen, of Minerva, the Goddess of War. Even the imperiously curved nose, and the firm rounded chin had something Greek about it, as though she was what the sculptors had been striving towards, but had never quite achieved.

Gemellus is hot-tempered and a devoted servant of Rome. When an equally fiery Celtic auxiliary officer, Duatha Ambrosius, insults Rome, Gemellus ends up in a deadly duel. Prevented from killing each other, the combatants are given a choice of punishments: take three days of lashes which will most likely leave them dead, or sneak into her camp and assassinate Boudicca, the Red Queen.

Red Queen, White Queen is mainly the tale of Gemellus Ennius’s two-fold journey. The first part is his physical trek through the dangerous lands of rebellious Britain. The landscape of Treece’s Britain is by turns peaceful and orderly, then dangerously chaotic. Where Rome rules, streets are laid out in neat rows and buildings rise straight and tall. But the thick woods still covering much of the island are very different, in some cases even harboring bandits. 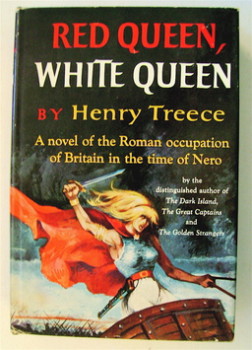 In the course of his mission to kill Boudicca, Gemellus meets Eithne, daughter of Drammoch, king of the Catuvellauni tribe. Despite his initial refusal when offered her in marriage, the Roman comes to see her as a doorway to a new life, separate from the violence and chaos around him. Among the carnage of Boudicca’s battlefield, Gemellus calls Eithne his white queen.

Gemellus and Duatha face numerous obstacles in their expedition to the Red Queen’s camp. Men thought to be allies turn out to have sworn loyalty to the rebellion; bandits ambush them in the deep forest; their own minds betray them as they begin to question their mission to kill Boudicca:

First Duatha spoke, saying, “I am a Celt, as she is. Yet I have sold myself, like an assassin, to the men she has offended. It is not my quarrel, it is Rome’s. Yet now I put my own head in danger. Why is that?”

Gemellus answered, ‘I understand you, brother, and the only answer I can give you is that a soldier, once he has taken his oath of service, must lose himself in his duty to his Commander. Yet, as I feel at the moment, it is not easy to recall one’s oath, to remember that one has a duty to Rome greater than one’s duty to oneself. I say it now as a child repeats his lessons in grammar, for duty and service were taught me from the cradle and I know no other way of life. But now I have come to doubt that teaching….’

The second, and more important, part of Gemellus’s journey is his change from loyal soldier of the Empire to something new — a hybrid of Roman and Celt. Gemellus presents himself as the most loyal and duty-bound Roman soldier. From birth, he’s been told Rome’s mission is to bring civilization to the world. Taken prisoner by Celts loyal to Boudicca, he imagines what he would say to the instructor back in Rome, who told him the barbarians would look on him as an elder brother:

Gemellus smiled in spite of the pain which his bonds caused him, to recall the little officer, who had never been further abroad than Tuscany…

He wanted to tell that staff officer that Rome was already an old bitch, gone in the teeth; that her generals were incompetent or senile; that the barbarians laughed at the greatest Power the world had ever known, and treated her soldiers like criminal idiots.

Each day closer to the Red Queen sees Gemellus further from his obligations to Rome. While he never betrays his mission, he feels himself drawn deeper to Britain and the peace he thinks he can find there with Eithne.

As he did in The Great Captains, Treece does a remarkable job here at creating a world nearly two thousand years distant from our own. The culture of the Roman army is rendered in believable detail. The soldiers, most of whom haven’t seen Rome in years, see themselves as maybe the most Roman of all Romans. They alone still hold to the ideals of duty and honor that the corruption of emperors like Nero have ruined. Even officers given over to indolence know where their true fidelity lies and how to die when the time comes.

The Celts have a different sense of loyalty. It is something owed only to family and individual kings. It leaves them vulnerable, in their smaller tribes, to the power of the unified Romans. Even as Gemellus recognizes the rot that’s set in in his nation, he also sees that its power can still be overwhelming.

In the final battle of Boudicca’s war, the Celts face the Romans almost childishly. They greet their enemies with theatrics and contempt. They place too much trust in their individual strength and the favor of their gods, so that they can’t imagine losing. But of course they do. Even their women and children, brought along to witness the great expected victory, are killed.

Red Queen, White Queen is an exciting study of a man caught between the duty and honor of his profession and the freedom he sees in the world around him. The anguish of Gemellus Ennius as he struggles to do his duty and find his way as the world is falling apart around him is compelling and often moving.

I think Treece was trying to understand what lay at the deepest roots of Britain; what made it the land it was to become. By retelling the stories of the Celts and the Romans, I think he was trying to prove that some sort of synthesis between the untamed independence of the former and the stolidity of the latter helped lay the foundation for the future. I’m not sure if that’s true, but the stories Treece tells are riveting and I don’t hesitate to recommend them wholeheartedly.

I’m looking forward to the remaining two books in the quartet. The Dark Island is making its way to me as I write, while The Golden Strangers sits on the shelf downstairs.

I recently acquired The Savage Warriors (The Dark Island) and The Great Captains. I know that the novels are part of a 4 book series about ancient Britain, but the tales are not linked, and take place during different ages of British history, so each is a stand-alone novel. However, your damned good review of Red Queen White Queen now compels me to seek out this novel and The Golden Strangers too… my to-read bookshelf groans in protest. Damn you Fletcher, damn you…
(By the way, The dark Island is excellent, enjoy!)

It is my job to make people buy more stuff! 😉

Indeed, they aren’t linked save thematically. However, a half Celtic character in RQWQ uses the name Ambrosius which I have to believe was a deliberate connection to Ambrosius Aurelianus in The Great Captains. I’m curious to see if anything similar happens in The Dark Island (which I’m happy to here is excellent).

[…] who raped her and killed her mother. While I’m a fan of the period (see my recent review of Red Queen, White Queen), and though it is well written and contains several good, gruesome episodes, I didn’t enjoy […]