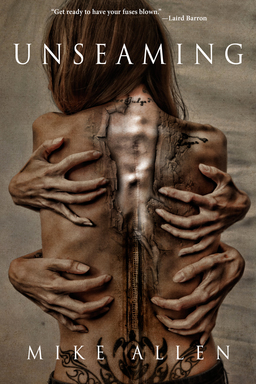 Mike Allen has made a name for himself with his unique blend of dark fantasy and horror. John R. Fultz called his debut novel, The Black Fire Concerto (which we published an exclusive excerpt from last August), “a post-apocalyptic melody played on strings of Terror and Sorcery. ” This month, Mike releases his long-anticipated debut short story collection, Unseaming, collecting fiction from Weird Tales, Cthulhu’s Reign, and other places. Mike’s short fiction has been nominated for the Nebula Award, and in a starred review, Publishers Weekly said the stories within “deliver solid shivering terror tinged with melancholy sorrow over the fragility of humankind.”

Everyone in the world awakens covered in blood-and no one knows where the blood came from. A childhood doll arrives to tear its owner’s reality limb from limb. A portal to the spirit realm stretches wide on the Appalachian Trail, and something more than human crawls through on eight legs. Words of comfort change to terrifying sounds as a force from outside time speaks through them. The buttons in the bin will unseam your flesh to bare your nastiest secrets.

Opening with “The Button Bin,” a finalist for the Nebula Award for Best Short Story, and culminating with its sequel, “The Quiltmaker,” which Bram Stoker Award and Shirley Jackson Award winner Laird Barron has hailed as Mike Allen’s masterpiece, this debut collection gathers fourteen horror tales that, in the words of Barron’s introduction, “rival anything committed to paper by the likes of contemporary masters such as Clive Barker, Ramsey Campbell, or Caitlín Kiernan. This is raw, visceral, and sometimes bloody stuff. Primal stuff.”

Unseaming was released on October 1, 2014 by Antimatter Press. It is 222 pages, priced at $15.95 in trade paperback and $5.99 for the digital edition. The introduction is by Laird Barron. Get more details or order a copy directly from the Antimatter website.