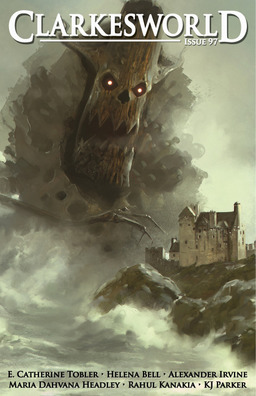 You know, we don’t pay enough attention to Clarkesworld.

Clarkesworld, founded by Neil Clarke and edited by Sean Wallace, is one of the genre’s pioneering online magazines — and also one of its most successful. It has been published monthly for over eight years, since October 2006. Each issue is packed with fiction, interviews, and articles, and the cover art — like this month’s gorgeously gonzo piece from Sandeep Karunakaran — is consistently excellent. (Click the image at right for the full-size version.)

Clarkesworld is a three-time winner of the Hugo Award for Best Semiprozine, and stories from the magazine have been nominated (and won) countless awards, including the Hugo, Nebula, World Fantasy, Sturgeon, Locus, Shirley Jackson, and Stoker Awards. In 2013, for example, Clarkesworld received more Hugo nominations for short fiction than all the leading print magazines (Asimov’s, Analog, and The Magazine of Fantasy & Science Fiction) combined.

If you’re not fond of reading online magazines, Clarkesworld also makes its fiction available in ebook editions, audio podcasts, print issues, and in an annual print and ebook anthology. How convenient can you get?

“Taxidermist in the Underworld” by Maria Dahvana Headley
“Lovecraft” by Helena Bell
“Seeking boarder for rm w/ attached bathroom, must be willing to live with ghosts ($500 / Berkeley)” by Rahul Kanakia
“Pithing Needle” by E. Catherine Tobler

“I Sing the Lady Electric” by Brian Francis Slattery
“Another Word: What You Know” by Daniel Abraham
“Editor’s Desk: Eight is a Good Number” by Neil Clarke
“Science Fiction Writers Wear Disguises: A Conversation with Robert Reed” by Alvaro Zinos-Amaro

We last covered Clarkesworld with issue #68, reviewed by David Soyka.

Clarkesworld 97 was published by Wyrm Publishing. The contents are available for free online; individual issues can be purchased for $3.99, and monthly subscriptions are $2.99/month. A 6-month sub is $17.94, and the annual price is $35.88. Learn more and order individual issues at the magazine website.

[…] last covered Clarkesworld with Issue 97, and the anthology Clarkesworld: Year Six edited by Neil Clarke and Sean Wallace. The anthologies […]