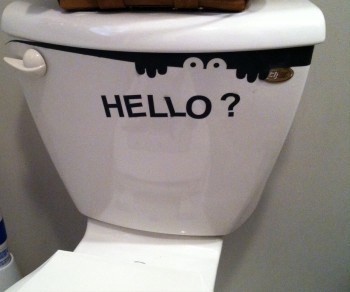 I may have just succeeded in posting the most incongruous title in Black Gate online history, but it does make perfect sense: read on, and I will present a mystery of the Orient, an enigma from eBay, a conundrum on the commode!

As you can see over on the right side of your screen, a tiny man peeps out from under the lid of my toilet’s holding tank asking “Hello?”

In my nine years of eBay hunting, I have come across many strange things: shrunken heads, souls for sale, magic spells (guaranteed to work). I have chronicled some of those finds here at Black Gate. But this one caught my eye, not because of the rather run-of-the-mill object, but the price.

When he arrived in my mailbox, a sticky decal neatly folded into a small, padded manila envelope, I found myself asking very much the same thing: “Hello?” as in “Hello, what have we here?” Even though I had, indeed, ordered him, I was still somewhat baffled that he should arrive at all.

The reason for my bewilderment is that he was shipped from China; he cost 89 cents; shipping was FREE.

I couldn’t tell you what I was searching for when this came up, but there it was. The item was listed as follows:

And if you know me, you know there are some key trigger words in that there spray of language that would grab my attention.

Well, I figured that he would be amusing to my kids when they came in to use the potty the morning after I surreptitiously slapped him onto the porcelain. The price was right — it’s the sort of product you can imagine running across for a buck at the Dollar Tree store. But I couldn’t quite wrap my mind around the fact that despite this being an international shipment, it would be coming all the way from Shanghai for free.

The seller had pretty good ratings — I checked. The few negatives were all along the lines of the product being flimsier than anticipated or that the folding for shipment put some creases in the decal, to which I thought, “What do you expect? It’s 89 cents.” I went ahead and put it to the test; I placed my order.

Three weeks later, there he was, ready to take his place on the plumbing of my private residence — where he has reliably clung for nigh on two months now (honestly, I figured he would have lost his stickiness and peeled off by now, so there’s a plus).

But the more I ponder it, the less sense it makes. 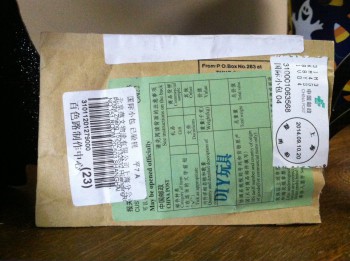 There on the left side of your screen is the envelope he arrived in: all the characters on one side of the envelope are Chinese; on the other side is my address in English, but nowhere is there a shipping rate that I can decipher, so I can’t tell how much it cost to mail via Standard International Shipping. Presumably less than 89 cents. That’s a bit surprising to me, because I think it might cost me more than that to ship this envelope to the next town over. So maybe there is some special Chinese shipping rate of which I was unaware.

Undoubtedly the product itself only cost a couple pennies to manufacture. For the sake of argument, let’s say it cost two cents to make. That would leave 87 cents. The manila envelope would have cost something, but let’s keep it simple and leave that out of the equation. So 87 cents less postage is what this seller (“Jewels-Malls,” a name they have registered) made on the product. Again, I have no idea what the shipping cost — I would never have guessed it would be less than a buck to ship something from Shanghai — but let’s just pick an arbitrary number: 85 cents. Okay, that would leave 2 cents profit. Was sticking this thing into an envelope, addressing it to me, sealing it up, and bringing it to the post really worth 2 cents? I know workers in China make less than their American counterparts — a lot less — but still, doesn’t that seem a lot of work to go through to rake in, literally, pennies?

Still, I’m having a hard time wrapping my head around it.

Next week begins my second annual Three Weeks of Hallowe’en run here at Black Gate (which includes a week-after-Hallowe’en postmortem). All of my blog posts will focus on Hallowe’en and/or horror-related themes (in other words, they will be pretty much like most of my other posts). Last week, in preparation, I had a belt or two of whisky and wandered out into the dead center of a cornfield. I stood there, rows on rows of corn in every direction, no sound but the slight breeze rustling the stalks.

No scarecrow stalked me, and I was slightly disappointed when I emerged on the other side of the field into the same world as before. But I’ll keep imagining those stalking bogeymen and those other worlds, and keep providing commentary on others who do so. See you here next week for some more October dreams!

That may be the strangest title we’ve ever had at Black Gate.

It’s official — ed-in-chief John says this may be the strangest title ever at Black Gate! However, I will not rest on my laurels: I’ll be trying to top that with an even stranger title (no non sequiturs allowed, mind you — my strange titles must make perfect sense in the context of the post).