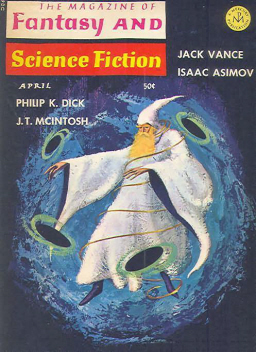 I called the last magazine I covered (Fantastic for April 1960) “determinedly minor.” This issue of F&SF seems much more significant to me.

Asimov’s column is one of his lesser ones: little but a list of the Nobel Prize winners in the Science fields by nationality. That’s a long list, so it takes up most of his page count. He does a tiny amount of analysis of the numbers, but not much.

Merril begins by reviewing two very ’60s-ish popular science books: LSD: The Consciousness Inducing Drug (edited by David Solomon, with contributions from those you’d expect, like Alan Watts, Aldous Huxley, and Timothy Leary), and Games People Play by Eric Berne. She recommends the LSD book, but is quite negative about Games People Play.

In the way of SF, she begins by looking at two John Brunner books, The Day of the Star Cities and The Squares of the City. She identifies the first as “up there with the best of his earlier work” and the second as a step beyond, building on his growth that started with The Whole Man. I think that jibes with the consensus view of Brunner’s career. She ends up saying, “[I]t leaves me very eager to see Brunner’s next.”

She follows with a review of Mack Reynolds’ Planetary Agent X, in which she complains, essentially, that Reynolds does not seem interested in taking the same sorts of steps forward that Brunner did – again, I think most would agree that Reynolds’ career was one in which he achieved the sort of prolific competence that Brunner did early, but which never really developed. 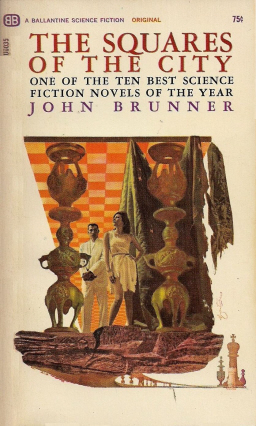 Then she reviews Rick Raphael’s first novel Code Three, noting that it has both the virtues and failings of Analog fiction: “the virtues to a degree rarely reached in or out of that magazine.” She avers that Raphael has a chance to become a major talent – alas, as we have discussed here before, that never really happened.

Her final review is of Alan E. Nourse’s The Universe Between, which she admits having skipped for a while because it was marketed as a juvenile, but which she praises very highly. (It was a favorite of mine back when I was, ahem, a juvenile myself.)

One more mini-feature is a little personal ad at the bottom of page 74, from L. Sprague de Camp. It states that Glenn Lord, literary agent for the estate of Robert E. Howard, found page 17 of an unknown Howard story. He and de Camp were looking for the first 16 pages of the story… did anyone have them?

This was about the time, wasn’t it, that de Camp began turning Howard’s fragments into completed stories? Does anyone know if this specific ad had any result? 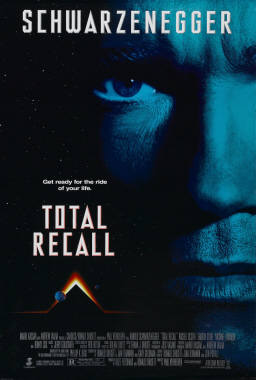 Anyway, we begin, of course, with a very famous story. “We Can Remember It For You Wholesale” was, I think, particularly admired among Dick stories even before the movie Total Recall was made from it. It has been one of my favorites among his oeuvre, certainly.

It was immediately anthologized in Wollheim/Carr’s World’s Best, and in the second Nebula Awards volume, and in the 16th series of the Best from F&SF, and later in Robert Silverberg’s Alpha 5. Presumably I read it first in the Nebula volume, or perhaps in Alpha 5, which is one of the earliest anthologies I can recall buying from a bookstore.

As many will recall (or will they? [grin]), the story concerns a nebbishy clerk who wants to go to Mars, and realizes he can’t afford a real trip, so decides to go to a company which will implant memories in him, as if he actually had gone to Mars. Indeed, he wants not just a trip, but a memory of going to Mars as a secret agent for Interplan… but something goes wrong, and his “memories” seem only too real.

Perhaps he really was an Interplan agent? Rereading (not for the first time) I found it still very good, but I was vaguely disappointed that the story seems in essence “closed” – that is, what happens seems quite clear by the end. Somehow I expected – almost remembered – an ambiguous ending, where it wasn’t clear which memories were real, or indeed what reality really was.

As for “The Sorcerer Pharesm,” it is the third of Jack Vance’s second set of Dying Earth tales. These all featured the roguish thief Cugel the Clever. While these were enjoyable, I never ranked them at the top, or close to the top, of Vance’s work. In this one Cugel encounters a group of people working on strange sculptures, which turn out to be designed by the sorcerer Pharesm to entice something he calls TOTALITY to appear… naturally Cugel messes up Pharesm’s plans by accident, so Pharesm sends Cugel a million years into the past to retrieve TOTALITY. It’s amusing, but lacks the bite of Vance’s best stuff. 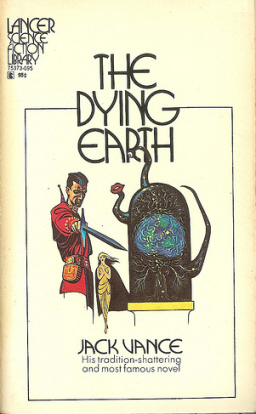 Three of the short stories are by Little Known Writers, at least in the SF field. I have no idea who James Pulley, author of “The Space Twins”, might be – this is his only entry in the ISFDB. It’s about a pair of astronauts sent to Mars – only one survives the trip. That’s about all there is to it, though the story closes with an image that makes the trip a symbol. Didn’t do much for me, though it’s fair to say the story does do some interesting things with its imagery – reminiscent backward (just a bit) of Blish’s classic “Common Time,” and forward, to be sure, of the conclusion of 2001: A Space Odyssey.

A. M. Marple, author of “Appoggiatura,” also only appears once in the ISFDB, but the blurb for her story says she had written for Jack and Jill, Gentlemen’s Quarterly, Teen, and the New Republic … so she qualifies as one of those general writers who used to moonlight in F&SF when they had a slightly fantastical idea. That said, I don’t know anything more about her… This story is also rather trivial, if amusing, about a cat and his friend, a flea, who is a brilliant tenor, and who becomes an opera sensation.

Finally, Gilbert Thomas is rather better known: he had 5 stories in F&SF between 1966 and 1969, one of which, “Luana,” was in Merril’s Year’s Best and the 16th series of the Best from F&SF. According to the blurb, he wrote for radio and TV and for the Saturday Review, as well as some mystery fiction.

“The Face is Familiar” is very stylishly told, set in Saigon probably in the period between the French departure and the Vietnam War. A cynical American diplomat welcomes an old friend of sorts, a British doctor, who tells him a story of his wife and the brilliant surgeon who cuckolded him, and of what happened after his wife died of breast cancer, and her lover (the surgeon) couldn’t give her up. The conclusion is just absurd enough to provoke laughter (in me, anyway) rather than the horror or pity that I think was intended. Still, interesting.

The other writers are all SF veterans. J. T. McIntosh’s “The Sudden Silence” is kind of typical for him, setting up a somewhat artificial situation, in a supposedly Sfnal setting (fairly far in the future when humans occupy two planets in a distant Solar System). McIntosh wrote somewhere that he purposely limited his situations to illuminate his point, but to me that makes them seem strained sometimes, and it’s hard for me to believe this is really the future. Anyway, a team of five people, two women and three men, are sent from one planet to the other, which has gone completely silent all of a sudden. Poison gas is suspected, but that doesn’t really make sense, and when they arrive they soon can rule that out – but when a couple of them investigate, they soon go silent as well. The solution is clever enough, if not really convincing. The story, though, is further adorned by some, to my mind, unconvincing sexual politics.

Carol Emshwiller’s short-short “But Soft, What Light…” is a cute piece about Uniq-o-fax, a computer that writes poetry, and the woman hired to be its – operator? – who falls in love with it or him… minor no doubt but well done.

And finally, Larry Niven’s “Bordered in Black” is another story of two astronauts sent to another planet, of whom only one returns. In this case the expedition is the first FTL trip, and the planet is a curious one, inhabited at first it seems only by algae – but, when they investigate the black border of one continent, they find something much scarier. It has a nice sting in its tail, and I remember being kind of wowed on first reading, but this time through I thought it overlong, and also overmanipulated to reach its conclusion. Not bad though.

Rich Horton’s last retro-review for us was the April 1960 issue of Fantastic Science Fiction Stories. See all of Rich’s retro-reviews here.

Please keep these reviews of old magazines coming. They remind us of the profile of sf’s publishing scene once upon a time, and sometimes of stories worth rereading or running down for the first time. The Vance image might more appropriately be for The Eyes of the Overworld, where “Pharesm” ended up.

[…] Horton’s last retro-review for us was the April 1966 issue of Fantasy and Science Fiction. See all of Rich’s retro-reviews […]