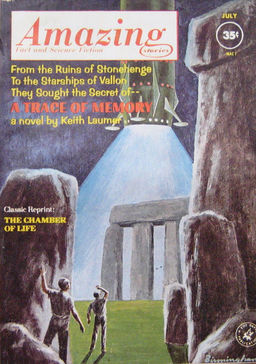 Back to Cele Goldsmith’s tenure at Amazing/Fantastic. This is a pretty strong issue, with, notably and perhaps surprisingly, a strong “Classic Reprint” novelet, and a strong serial opener. (The shorter fiction is less impressive.)

The cover is by Lloyd Birmingham, a semi-regular at Amazing/Fantastic throughout the ’60s, who also had one cover for Analog, one for an Ace Double, and a couple more. But he was never well-known in the field. It illustrates the serial in this issue, part one of Keith Laumer’s A Trace of Memory, competently but not particularly specially. Interiors are by Birmingham again, Leo Summers, Virgil Finlay, Dan Adkins, and Austin Briggs.

Norman Lobsenz’s editorial discusses some evidence that may or may not support the Big Bang theory. (This was a couple of years before the discovery of the 3 degree background radiation of the universe.) The lettercol, “ … or So you Say”, features a long letter by Julian Reid complaining about two recent Mark Clifton stories (“Hang Head, Vandal!” and the serial Pawn of the Black Feet), following a very long defense of his work by Clifton himself.

This response may be the last thing Clifton ever published. (He died in 1963, and I am sure he published no more stories after “Hang Head, Vandal!”) I think Clifton gets the better of the argument, pointing out for one thing that Pawn of the Black Fleet (aka When They Come From Space) is a spoof, which Reid took altogether too seriously.

S. E. Cotts’s book review column, “The Spectroscope,” covers Damon Knight anthology A Century of Science Fiction, with very high praise for the stories, but some quibbling about Knight’s categorization of different aspects of the field; and J. F. Bone’s The Lani People, which Cotts considers not very original, but quite fun. There is a very brief “Benedict Breadfruit” squib by “Grandall Barretton” (Randall Garrett) … these are decidedly sub-Feghootian to begin with and this one is worse than usual. Ben Bova (or “Ben Ben Bova” as the TOC has it) contributes an article on “The Three Requirements of Life in the Solar System,” second in a four-article series on the possibilities of alien life, this one covering possibilities for life on other planets in our system. 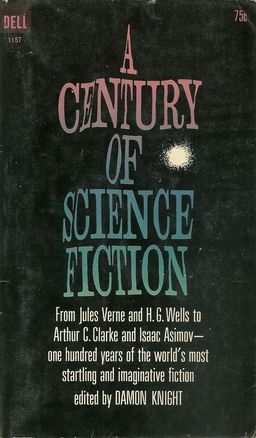 To begin with the shorter and less-impressive stories. Richard Banks is definitely a Little Known Writer – he appears only twice in the ISFDB, with a 1961 story in F&SF and with this piece. It’s about an oppressive future society in which school is closely regulated, and teaching or learning anything unacceptable leads to a walk into the matter destroyer instead of the matter transmitter. Never a surprise, and, worse, it never convinces that the society is real, nor the main character, an old teacher who seems to perhaps have resisted in subtle ways before finally getting caught.

William W. Stuart was slightly better known. He had 9 stories appear between 1960 and 1962, mostly in Galaxy or If, but Cele Goldsmith bought two of his pieces. A few of Stuart’s stories were anthologized.

“A Prison Make” is about a man imprisoned, apparently for a crime he might possibly commit. Much is made about the vaguely comical circumstances of his imprisonment – terrible food made by sarcastic cooks, a robot public defender … and then there’s the final “twist,” in which we learn (spoiler!) that his cell is not locked, but that he still doesn’t care to leave. Seemed like Stuart was trying for cleverness, or even (as the blurb had it) a Kafkaesque effect, but he didn’t pull it off.

The third short story is by Robert F. Young, and it doesn’t seem characteristic of him. “The Blonde from Barsoom” is about an unsuccessful writer of blatant Burroughs imitations who finds himself in the world that he has “created” (or copied), complete with a buxom companion and threatening “Tarks.” In the end, he realizes that this world is better than dealing with his nagging wife, especially as he finds himself able to write editors into the whole thing … I don’t think this was Young’s metier at all.

So – three minor short stories, with only the Stuart redeemed by at least of a touch of ambition. But the other two pieces are much better. The surprise, for me, was the classic reprint, G. Peyton Wertenbaker’s “The Chamber of Life,” This first appeared in the October 1929 Amazing. Wertenbaker published only 6 SF stories, the first appearing in Gernback’s Science and Invention‘s special “scientifiction” issue in 1923, when he was only 15. So he was just 22 when “The Chamber of Life” was published. By the 1930s, Wertenbaker had turned to “regional” novels, such as Black Cabin and Rain on the Mountain (both as by “Green Peyton.”)

He worked for Fortune and for Time magazines, worked as an intelligence officer in World War II, and after the war ended up as a writer in the space industry, concentrating on space medicine. It’s a shame Wertenbaker turned away from SF, but he seems to have had a full and successful life as a writer and as a contributor to both the war effort and the fledgling space industry. (All this information from the Science Fiction Encyclopedia entry on him, written by Mike Ashley.)

“The Chamber of Life” is, frankly, an astonishing work to have appeared in an SF pulp in the 1920s, and to have been written by such a young man as well. It has only been reprinted (presumably for free) in this issue of Amazing and in the Winter 1970 Science Fiction Adventure Classics, one of the awful reprint ‘zines published by Ultimate Publishing after they bought Amazing/Fantastic (and their backlist). I would say it deserves a more permanent anthologization. 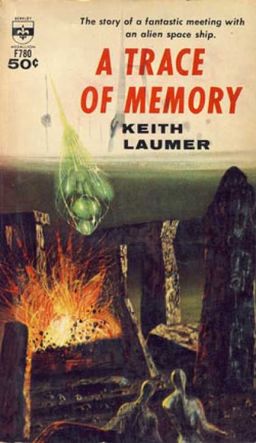 It’s told by a youngish man named Barrett who comes to himself in a cold river, in a city which eventually appears to be (perhaps) Richmond, VA. He recalls a conversation he had with a man in his Club, and his interest in the man’s invention, which combined radio, motion pictures, and other inventions, into a sort of virtual reality machine. The two try out the machine, which appears to project Barrett into an utopian future. He spends a couple of months there, learning about their somewhat pleasant but highly regimented society. He falls in love with a woman, but they cannot be together, because in this society the person one marries has been determined generations in advance, to ensure the best development of the society.

And then his time in the “future” is over and he must return to his own time, and reconcile himself to the loss of his love, and even to doubt over whether she was real or just a dream or a fiction. It’s not exactly a new idea to a contemporary reader, but it seems to me it was rather fresh back then, but more than that, the story seems very well executed to me, and quite moving.

Based on the first installment, I’d say it’s likely another very fine enjoyable adventure story. The main character is a man named Legion (yes, I know, that’s a rather lame bit of naming), who is down on his luck in a southern town, when he sees an ad looking for a “soldier of fortune.” The ad doesn’t seem worth his time, but when a robbery attempt goes bad, he is arrested by a rich man named Foster, who turns out to be the man who placed the ad, and against his will he ends up, more or less, filling the position, which turns strange quickly.

The man who hired him claims to be very long-lived indeed, and he has a strange book, much of it in code, which seems to be partly a diary, chronicling centuries of events, some concerning pursuit by strange creatures, or lights. Legion still isn’t buying it, but then the house is attacked, and Legion and Foster escape … and Foster is suddenly regenerated, the same man but decades younger … and the book leads them to Stonehenge … and then to space …

Laumer was a great writer of breakneck, don’t-stop-to-think action and that’s what’s going on here. I don’t know where it will end up, but I do know I plan to find the rest of the novel and find out.

Rich Horton’s last retro-review for us was the April 1966 issue of Fantasy and Science Fiction. See all of Rich’s retro-reviews here.

Thanks — I enjoy seeing entries about the Cele Goldsmith tenure with Amazing and Fantastic. I used to run across these in second hand stores. Analog and F & SF, those you generally didn’t find, but these, yes.

[…] Horton’s last retro-review for us was the July 1962 issue of Amazing Stories. See all of Rich’s retro-reviews […]