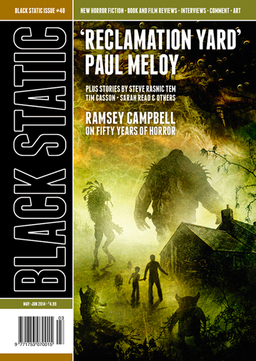 On my way home from work yesterday, I dropped by Barnes & Noble to pick up the latest issues of Asimov’s SF and Fantasy & Science Fiction. I couldn’t find them at my local B&N here in St. Charles, Illinois, so I made a special trip all the way to Schaumberg.

No dice. After poking behind all the knitting and puzzle magazines for nearly 10 minutes, all I managed to come up with was last month’s Asimov’s and Analog. Both clearly stated “On sale until 9/2” in the bottom left corner, which tells me the new issues are more than a week overdue.

Come on — what’s a guy gotta do to buy a science fiction magazine around here? It’s almost enough to make me give up and buy Health Magazine instead. Maybe I can get some suggestions on how to reduce all this stress in my life.

Now, it’s not strictly true that all I found was Asimov’s and Analog. Just a few inches over, hidden behind the latest issue of McSweeney’s, I discovered something unusual: issue #40 of British horror magazine Black Static.

Well, this is timely. Just last week, as I was formatting the article on the British Fantasy Awards and looking for pics to go with it, I stumbled on the cover of Black Static #33 (containing Best Short Story winner “Signs of the Times,” by Carole Johnstone), and I thought, “Damn, that’s a mighty fine cover, with that creepy subway, and floating vapor, or whatever the heck that is. I should really get a copy of this magazine. I bet I’d like it.”

Also, it’s timely because the cover has a giant green, vaguely Cthuloid, monster stomping around in the background, and we all know the correct time to buy magazines with giant monsters on the cover is, um, always. So I bought it.

And I was right — I do like it. The magazine is gorgeous, with the excellent design I’ve come to expect from TTA Press (who also publish Interzone). Issue 40 is nearly 100 pages and comes packed with new horror and dark fantasy fiction by Steve Rasnic Tem, Tim Casson, Chris Barnham, Sarah Read, Stephen Hargadon, and Paul Meloy. There’s also a lengthy interview with Ramsey Campbell, book reviews by Peter Tennant, DVD/Blu-ray reviews by Tony Lee, and columns by Stephen Volk and Lynda E. Rucker.

The interior art is excellent and adds enormously to the appeal. Here’s the opening spread for “The Crone at the Meadow Gate” by Tim Casson, with art by Richard Wagner: 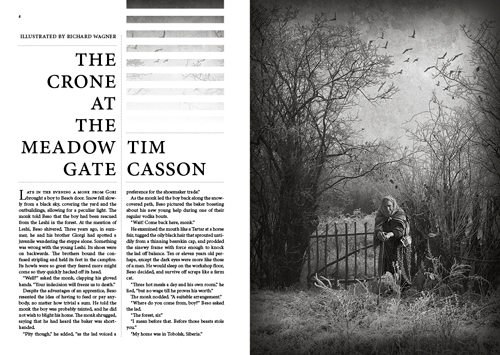 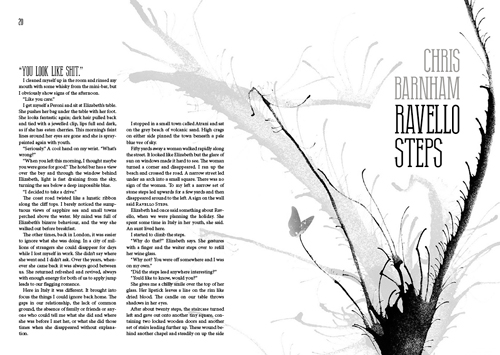 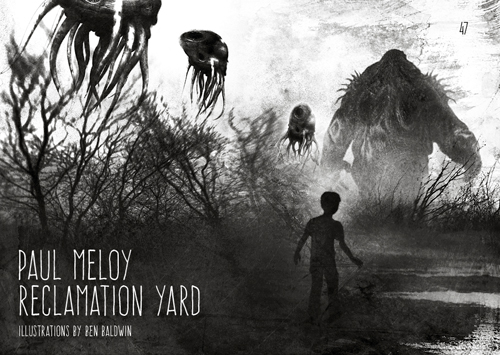 Beautiful stuff. I was sold the moment I started flipping through the issue. See more details and excerpts from issue 40 at the TTA website.

Black Static is edited by Andy Cox, and published by TTA Press. Issue #40 is cover-dated May-June 2014, which means you may have to hunt a little bit to find it. (I found the next issue, Black Static #41, on sale date July 7, on the shelves next to it, and issue #42 officially goes on sale Sept 2.) The cover is by Ben Baldwin, with interior illustrations by Ben Baldwin, Richard Wagner, and David Gentry.

Issue 40 is 96 pages, priced at £4.99. I paid $9.99 here in the US, which isn’t too bad when you consider that it had to make the long journey across the Atlantic on a submarine or whatever just to get here. A six-issue subscription is £27 (UK) and £33 in the US; I have no idea what that is in real money. Order right from the TTA Press website.

My B&N carries Interzone, but I’ve not seen this one. And there’s not another B&N within driving distance. Too bad there isn’t an electronic edition.

I wonder if it’s just now getting national distribution in the US. I hope so: I’ll be keeping an eye out for future issues.

I also found issue 41, and will try and do a write-up next week.

I’ve been buying Black Static for a couple of years, hunting back issues via ebay, and also The 3rd Alternative, which was its sort of predecessor from TTA.

Seems to me it’s at the cutting edge of short horror fiction, esp. British horror. The columns by Volk and Fowler are always interesting and the reviews try to be as comprehensive as possible.

It retails here in Australia for A$9.99, which given the exchange rate, is roughly the same as in the States. I *think* electronic versions are available, perhaps via Goodreads, of earlier editions, but you’d have to check.

And they published a short story of mine for the TTA online Christmas Advent calendar last year, by way of hype and full disclosure!

[…] Last month I reported on the first issue of Black Static magazine I ever bought, issue 40. I was very impressed. […]

[…] reported on the first issues of Black Static I purchased, issues 40 and 41, back in October. I enjoyed both, and thought the magazine was deserving of regular […]

[…] stumbled on my first copy of Black Static, issue #40, at a Barnes and Noble here in Chicago last year, and I was very impressed. The magazine is […]

[…] Last month, I reported on the first issue of Black Static magazine I ever purchased, issue 40. I was very impressed. […]

[…] stumbled on my first copy of Black Static, issue #40, at a Barnes and Noble here in Chicago last year, and I was very impressed. The magazine is […]