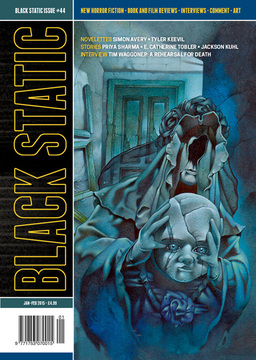 I stumbled on my first copy of Black Static, issue #40, at a Barnes and Noble here in Chicago last year, and I was very impressed. The magazine is beautifully designed and illustrated, with top-notch writing and some great columns. It’s exactly the kind of thing I like to take with me on long plane rides.

I’ve been tracking down subsequent issues and writing about them here, because I think you deserve to know about them. Also, because really excellent fantasy magazines are a vanishing breed, and they deserve your support. Issue #44 is cover-dated January/February, which means it’s still on sale here in the US. The fiction contents are:

“Going Back to the World” by Simon Avery
“The Absent Shade” by Priya Sharma
“The Fishers of Men” by Jackson Kuhl
“Sweet Water” by E. Catherine Tobler
“Samhain” by Tyler Keevil

Yes, that’s our own Jackson Kuhl in the TOC. Jackson’s last article for us was his review of Jeffrey E. Barlough’s The Cobbler of Ridingham, which appeared here last week. On his blog, Jackson talks a little about selling his story, “The Fishers of Men,” to a British market like Black Static:

I was a little shocked when [Black Static editor] Andy Cox accepted “Fishers;” it is a very American story and when I sent it I wasn’t sure the historical background would translate. But I suppose I don’t have to know the intricacies of lines of royal succession or the industrialization of Greater Manchester to enjoy M.R. James, Robert Aickman, or Susanna Clarke (to name the three most recent authors I’ve read), so perhaps the width of the Atlantic isn’t as great as I sometimes imagine.

The cover art, ‘Ghost,’ is by Martin Hanford.

As usual, the interior art adds enormously to the professional look of the magazine. Here’s the opening spread for Jackson Kuhl’s short story: 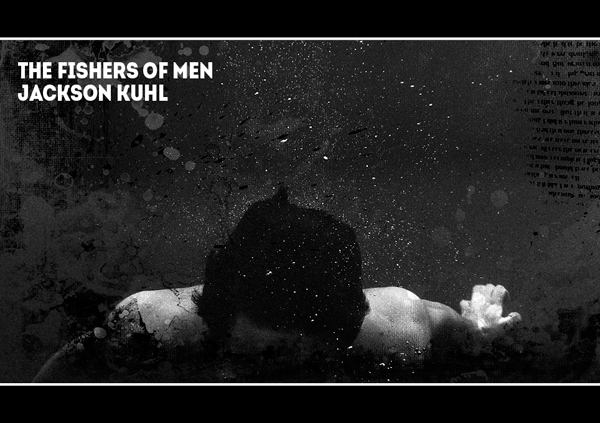 And the novelette “Samhain” by Tyler Keevil (illustration by George Cotronis). 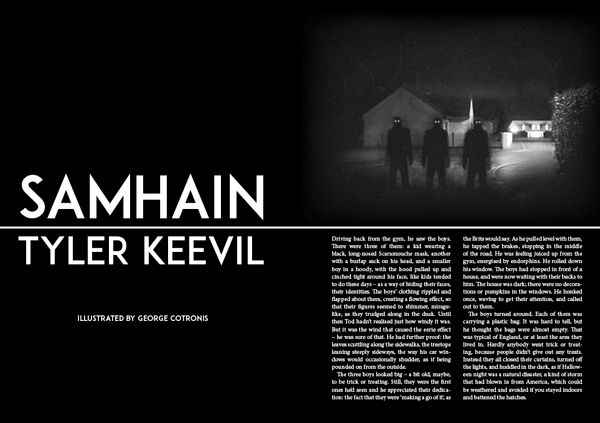 And even the crisp and easy-to-read layout for Peter Tennant’s Book Review column. 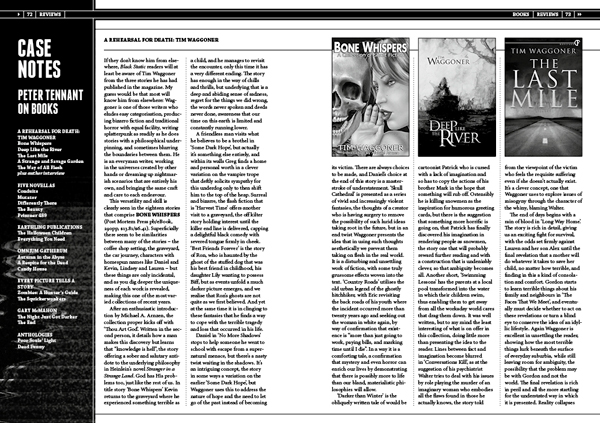 See more details and excerpts from issue 44 at the TTA website.

See all of our recent coverage of magazines here. We last covered Black Static with issue #43.

I note that this issue has a story by Priya Sharma. Her stories keep popping up in horror best-of anthologies here in the US. I highly recommend Sharma’s work; she writes very effective horror stories.

Thanks for the rec, James!

[…] See all of our recent coverage of magazines here. We last covered Black Static with issue #44. […]