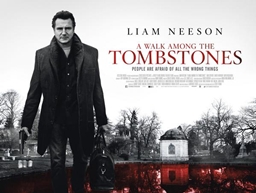 On September 19, Liam Neeson’s latest blockbuster, A Walk Among the Tombstones, opens in theaters nationwide. Neeson plays Matthew Scudder, an ex-cop who is an off-the-book private investigator and a recovering alcoholic.

Scudder has starred in seventeen novels dating back to 1976 and a bunch of short stories, all written by Lawrence Block. Tombstones is actually the tenth book in the series, so they’re starting well into things.

Jeff Bridges had played Scudder in Eight Million Ways to Die (the fifth book), moving the story to California(!) and making him a sheriff’s deputy (Hollywood!)

Block, who I mentioned in this post, is a fantastic writer. Along with Scudder, he has written series starring an adventurer who can’t sleep (Tanner), a bookstore owning burglar (Bernie Rhodenbarr), a lawyer who will do anything to win a case (Martin Ehrengraf), a likeable hit man (Keller), and a humorous Nero Wolfe/Archie Goodwin-esque pair (Leo Haig and Chip Harrison). And he’s one of the finest short story writers I’ve run across. Enough Rope is a superb collection of his short fiction. 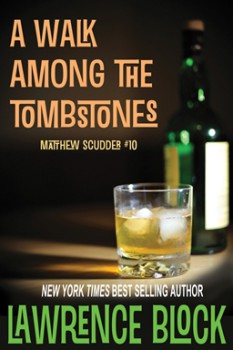 With his two Taken movies, Neeson has established himself in roles where you don’t want to get on his bad side. I had doubts about the casting, but after seeing the trailer, I think they’ve captured the grittiness and sense of mortality of the Scudder books.

Block, a multiple Edgar Award winner and a Mystery Grand Master, is one of the giants in the mystery field. It looks like proper due has been given to one of his books with the upcoming film. And if you like the movie, you absolutely should read the first of the series, The Sins of the Father.

Over the first eight books, the protagonist’s character development is done as well as in any series I’ve ever read. The ninth book, When the Sacred Gin Mill Closes, was too dark for me (I can’t deal with snuff films) and I gave up the series. I’ll probably skip to the next book and pick it up again with the surging popularity.

One final word on Block: Telling Lies for Fun and Profit is the single best book on writing I’ve found in any field, be it fiction, non-, or screenwriting. And I’ve got a plethora of them.

My favourite of Block’s is A Dance at the Slaughterhouse, the book that precedes Tombstones. It’s always struck me as the perfect book — nothing unnecessary, nothing missing.
I think that somewhere Block’s described Ginmill as a transition book, how he got Scudder from the drinking phase of his life to the non-drinking phase, though I may have that wrong.