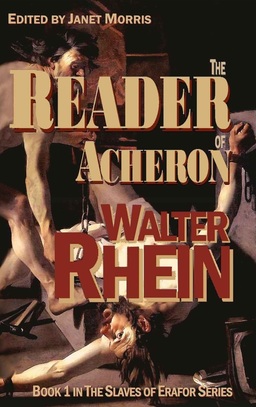 “Beneath the rule of tyrants, monsters may become heroes.”

Walter Rhein gives us something different in the way of heroic fantasy – a story set in a future world where it is forbidden to learn to read, forbidden to teach people to read. In the hierarchy of Erafor, reading and writing has been outlawed for decades, though basic iconography is allowed for the sake of keeping records.

The mysterious and powerful Seneschals are charged with eliminating all texts and “readers” in this brave new world, a world I hope to never find myself living in. For this is also a world where slaves are kept as animals, and are doped up on a brain-rotting drug called Bliss that keeps them docile, so they won’t rise up and pose a threat to their masters. But one slave, named Kikkan, manages to murder his master and mistress, and eventually escape to explore his world, in search of freedom, knowledge, and understanding.

But he chooses not to kill the slave owners’ children, and thus they vow revenge. This is not only the story of Kikkan’s murderous revolt; it is also the story of his education and his growth as a character and as a human being.

And then there’s Quillion, a rebellious soldier patrolling the border just north of the lands of Acheron, who also commits murder when he kills his buffoon of a commanding officer, a man who risks everyone else’s life but his own. Quillion has a rudimentary knowledge of reading and wants to learn more because there are things he desires to know, and he believes that knowledge is his right to own. When he and Cole, his friend, companion, and fellow soldier are conscripted to help in the hunt for the Reader of Acheron – someone who is teaching people to read, in violation of all the laws of the land – they find themselves caught up in politics, social ideals, and ideas… which are dangerous and what the hierarchy is dedicated to stamping out.

At one point in Rhein’s masterful tale, Cole asks Quillion why he wants to read and Quillion tells him: “Because I’m told not to! Why would anyone go through the effort to forbid something unless it was important, and that importance posed a threat to them?”

“Maybe they’re forbidding it for your own good?” Cole replies.

This, short and sweet, sums up perfectly Quillion’s character, the nature of his heart and soul, and gives us a hint of what his overall arc will be in subsequent volumes in this series.

And then there’s a boy with an eidetic memory, who is being taught to read by the Reader himself. How will he play into all this? What will become of Kikkan, the murderous slave, now a fugitive who finds himself involved with a group of rebels hiding out in the forests of Acheron? And what of the children of the slave owners murdered by Kikkan? Will they find him and exact their revenge? There is a lot going on in this novel: ideas and adventure, action and social commentary, all skillfully blended and beautifully written by a natural-born storyteller. There is something deep and dark and frightening lurking at the core of this fine novel that speaks volumes about our own world, governmental control of the media, and the conspiracy of misinformation – all without interfering with the flow and pace of this action-packed adventure.

A key passage halfway through the story sums it all up nicely:

Not for the first time, Quillion recognized the power to be gained from cursory record-keeping – or none. In the absence of recorded facts, only the hierarchy could give guidance. Without decisions based on recorded evidence, those in power chose preferred truths. It was convenient and efficient; the only thing sacrificed was reality.

There is power in knowledge, and therein lies the truth of it all: the pen is mightier than the sword, and words are more powerful than weapons. This is a thoughtful novel, filled with insight, mystery and suspense, and as I said before… it’s heroic fantasy of a different breed. I highly recommend it.

Walter Rhein is also the author of Beyond Birkie Fever and The Bone Sword, and is the editor of (as well as a contributor to) the recent anthology, Nine Heroes: Tales of Heroic Fantasy.

The Reader of Acheron was published on January 4, 2014 by Perseid Press and edited by Janet Morris. It is 394 pages, priced at $19.99 in trade paperback. Cover art: detail from Prometheus Being Chained, by Dirck van Baburen, 1623.

Thank you so much for posting this wonderful review. I read Black Gate with frequency and I have tremendous respect for the content you post here. I truly feel honored to be represented. Again, my sincerest thanks!

Walter Rhein, you are very welcome. It was a pleasure to review your fabulous novel. All the best for your future works!

Thoughts on Peru, Writing, and Other Stuff | Streets of Lima Demo

[…] was featured in the fantastic Fantasy journal “Black Gate.”  Please check out the review here and leave a few comments so they know to take my work seriously.  Also, Perseid has been working […]