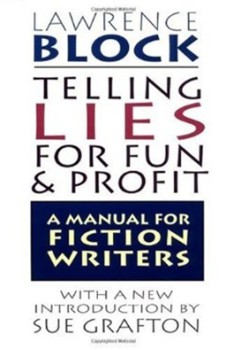 Chapter 25 of Lawrence Block’s Telling Lies for Fun and Profit (which should be on EVERY writer’s bookshelf) is titled, ‘First Things Second.’ As he succinctly summarizes (nice but unneeded alliteration there), “Don’t begin at the beginning.”

It’s a popular screenwriting maxim to enter the scene as late as you can. In other words, don’t begin at the beginning. I seem to recall William Goldman espousing this.

Block tells of being advised to switch the first two chapters of a detective novel he had written. Basically, this put the reader in the thick of the action from the outset, with some explanation following. Tension can be created at the outset and carried forward by not beginning at the beginning.

Sitting here at the keyboard, I can’t think offhand of a Sherlock Holmes or Solar Pons story that uses this technique. There’s a reason we’ve all got the image of Holmes and Watson sitting in their rooms at 221B Baker Street when a client or Inspector Lestrade comes to visit and we’re off on a case.

As I read this chapter, I thought of Will Thomas’s Barker and Llewlyn books (love them, but what’s with the two “L”s at the beginning of that name?). Barker has more than a passing resemblance to Sherlock Holmes (I suspect that Robert Downey Jr’s portrayal owes a debt to these books) and Llewellyn is his Watson (or Boswell). Mind you, they are excellent books and not simply Holmes copies.

I went over to the shelves and pulled out To Kingdom Come, the second book. And there it was. You want to grab your reader’s attention?

I was falling through an indigo sky. I remember the wind whistling in my ears and my coat flapping about my knees as I plummeted. My head hurt, and as I gazed up into the remote, star-studded vault of the heavens, I was having a little trouble piecing together exactly how I had gotten there. I felt as if I’d suddenly fallen off the edge of the earth and would hurtle forever, but the logical portion of my mind told me that all this falling must ultimately end. Unless Parliament had suddenly repealed Newton’s law of gravity, I was eventually going to strike something, and it wasn’t going to be pleasant. 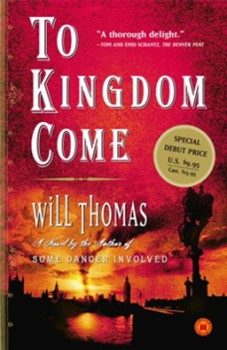 Thomas cleverly has Llewellyn figure out that the bridge above him indicates water must be below and he’s headed for it. He finishes the intro with, “In effect, before I died, I wanted to solve my own murder.” This scene, which wraps up on page 3, resumes on page 248. BOOM!

The next book, The Limehouse Text, opens with Barker in a Jean-Claude Van Dam-ish Oriental pit fight (curiously similar to a scene in Downey’s Holmes movie: made a few years later…).

Then we move backwards to find out how we got there. I highly recommend the five Barker books by Will Thomas. And  a sixth is due out in May!

So, give some thought to not beginning at the beginning. Grab your reader with action right out of the gate. Establish some tension. Make them wonder how the characters got to that intriguing point. Then go back and tell them.

After all, as the Bible tells us, the last shall be first and the first shall be last. That book has sold pretty well.

Not a fiction writer, but a couple of comments:

There’s a contemporary horror writer named Livia Llewellyn. And she’s got four “L”s in her name!

Also, I’m a big fan of Block’s crime and noir fiction. Didn’t know that he wrote a book on writing. Makes me interested in reading it though.

James – I’ve read ‘Telling Lies’ at least three times. It’s a collection of his columns on writing for Writer’s Digest. So each ‘chapter’ is a couple pages long, on a certain topic. It’s a great collection of wisdom. I like his humor as well.

He did a second collection from his columns: ‘Spider Spin Me a Web.’ It’s a bit weightier and I don’t find it as useful, though Block says he preferred it of the two.

Years later, he put out two more ebook only versions (cheap) of column collections. So, that’s four of these (I’ve only read part of the third so far).

And he actually has one or two more books on writing that aren’t related to the column. They’re on amazon.

I found that the Matthew Scudder books grew too dark and I stopped somewhere around number ten. But I’ve read quite a bit of his stuff and I think he’s a top tier writer.

Beginning with a bang is a convention that probably goes back to the pulp era.

Of course, any story needs to be interesting, in some way, from the first page, but the insistence that this means physical “action” is limiting. Beginning with a “bang” can be devastating if you want to develop atmosphere. Can you imagine Blackwood’s “Willows” beginning with some bizarre phenomenon, then backtracking with the material about the Danube canoe trip?!

I’m quite often put off by the “start with a bang” formula, and decline to read further….

@MAjor Wooten – I can see your point. Depends upon what the ‘bang’ is and the tone of the story. And Block’s article isn’t necessarily about a big bang, it’s about changing the order and backtracking. I shifted it to my idea of more action/tension to begin with.

Though the general result of that is some level of increased activity (of some kind) than would otherwise occur in a chronological order.

I do view this as different from Raymond Chandler’s axiom of “When in doubt, have a man come through the door into the room with a gun in his hand.” That’s a whole other thought (and one reason I’m not exactly a Chandler fanatic).

I think a survey of favorite stories from before the pulp era of the 1920s onwards would reveal that a great many of the stories that, for a long time at least, were regarded as favorite works of sf, fantasy, and also detection, started deliberately with material that eased you into the plot and atmosphere. If anyone wanted to do the tabulating, etc., it should actually be easy to test this. One could start by compiling a list of, say, 40 favorite works from before 1930 and giving a subjective assessment regarding whether or not the story started with a tense scene, a complication, etc. and afterwards provided explanation for it — or started in a casual or leisurely — or discursive — manner. Whether we’re talking Poe’s “Fall of the House of Usher,” Gaskell’s “Old Nurse’s Story,” Bronte’s Wuthering Heights, Tolstoy’s “Kreutzer Sonata” or Conrad’s “Heart of Darkness,” Machen’s “Black Seal,” Wells’s “Time Machine,” Lovecraft’s “Outsider,” or various ghost stories by M. R. James (starting with descriptions of country houses, etc.)… I think the latter is what we will often find. I generally relish that quality!

Since I wrote this post, Lawrence Block has moved into the public eye. He’s long been a successful author, but his ‘A Walk Among The Tombstones’ is about to become a box office smash as Liam Neeson’s latest movie.

And if you see ‘Walk’ and like it, most definitely read the first book in the series, ‘The Sins of the Fathers.’

The character development of Scudder over the years is the best of any series I’ve ever read.