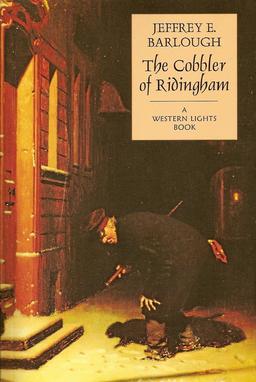 Jeffrey E. Barlough is one of the most gifted and ambitious fantasists at work today and his seven volume Western Lights series is unlike anything else on the shelves. In his review of the fifth volume, Anchorwick, Jackson Kuhl sums up events as follows:

Eugene Stanley has come to the university at Salthead (a parallel Seattle? Vancouver?) to assist his professor uncle in preparing a book manuscript. One night, while working in a deserted turret room at the college…  Stanley is accosted by a phantasmal form. This ignites a definitive search for the missing don as Stanley and friends uncover lost civilizations, ancestral curses, whole companies of ghosts, monsters from Greek myth, and a few red herrings, all told in rich, dryly humorous style. It’s P.G. Wodehouse with woolly mammoths.

Those who complain that there’s nothing new in fantasy today aren’t looking hard enough. And they’re definitely not reading Jeffrey E. Barlough.

The eighth volume in the Western Lights series, The Cobbler of Ridingham, will be released in November and it features Richard Hathaway, who previously appeared in Bertram of Butter Cross and the short story “Ebenezer Crackernut” (from A Tangle in Slops).

A creeping shadow, a bump in the night, a thing in the trees — these are but a few of the surprises lurking in the pages of The Cobbler of Ridingham… The new work relates a curious adventure that befell Richard Hathaway while visiting at Haigh Hall, the home of a family acquaintance, Lady Martindale, on the marshes outside the picturesque old country town of Ridingham.

Ridingham! “The quaintest and the most quintes-sentially charming of quaint old towns in the marshes. Of all the towns in Fenshire, it is perhaps the most Fenshirely.” Yet out on the marshes to the southwards, at Haigh Hall, all is not so charming, or so quaint. What is the curse that hangs over the Martindales with their motto, “Be courageous, and be fortunate”? What secrets preoccupy certain members of the household? What is it that her ladyship’s father, old Sam Gander, has seen in the evening sky while pacing the battlements? Above all, what is the sinister shadow that has returned to the Hall, and whose appearances portend the coming doom of a Martindale?

This latest Fenshire story takes place in the days before Mrs. Chugwell and her team of shovel-tusker mastodons began pushing the new road through Marley Wood, as recounted in 2007’s Bertram of Butter Cross. Mystery, fantasy, adventure, alternative history, comedy of manners — The Cobbler of Ridingham is all of these, and more. Like Bertram it is populated by a host of memorable characters, among them some of the author’s most delightful creations. In short, it is the new Western Lights book.

We previously covered What I Found at Hoole, and interviewed Barlough last January.

See all of our recent articles on upcoming books here.

I regret I’ve never heard of Barlough’s series. This might be just what I’ve been hungering for. An original, intriguing concept. Any combination of Burroughs, Lovecraft, and Dickens has my attention! Thanks for posting this; I’ll check it out!

You’re most welcome, James. Stop by to let us know what you thought!

[…] mammoths.” More recently, we covered What I Found at Hoole (2012) and the eighth volume, The Cobbler of Ridingham. We published an interview with him in […]