“The Speckled Band,” the eighth of the short stories which make up The Adventures of Sherlock Holmes, first appeared in the Strand Magazine in February, 1892. It is often cited as a favorite Holmes case by fans of the great detective. Sir Arthur Conan Doyle himself put it at number one on his own list in 1927. I’ve read it at least a dozen times.

However, it also appears to be one of the most poorly handled the world’s first private consulting detective. There are several questionable aspects that leave one to wonder at Holmes’ actions:

If you haven’t read this story yet, take fifteen minutes and do so. You can read it online here, with illustrations. Going on with my article before you’ve read the story will truly ruin one of the Canon’s best known tales.

Sending Helen Stoner Home – Helen Stoner is worried that her stepfather will be angry with her when they are both back home after their separate visits to Baker Street. Holmes tells her that Roylott must “guard himself” or he may find that someone is on his track.

Roylott already knows that Helen has been to visit Holmes: the cat is out of the bag. It is unclear why Holmes is not concerned for her safety. He even says that if Roylott gets violent with her, he will take her to her aunt’s home. That’s a bit reactive. Holmes does not seem to be properly safeguarding her welfare.

Examining the Safe – How did a snake live in a sealed safe? How much air could it get? Wouldn’t there have been ventilation holes? If so, why didn’t Holmes mention them?

Communicating in the Bedroom – Holmes waits until the two men have hidden themselves in Helen Stoner’s temporary bedroom to tell Watson that “the least sound would be fatal” to their plans.

Watson silently nods his understanding. Why didn’t Holmes convey this to Watson when they were waiting at the Crown Inn or on the walk to Stoke Moran? This is an inexcusable and wholly preventable risk.

Sitting on the Bed – Holmes sat on the edge of the bed and waited for the snake to hiss before lighting the match. Wasn’t this putting himself in grave danger? He was sitting near the place the snake was headed, in darkness, and apparently did not hear it until it prepared to strike.

Based on Watson’s narrative, the snake was released into the ventilator about a half hour earlier. Could it not have struck before Holmes heard it and lit the match?

Lighting the Match – The room is in darkness for over three hours before Holmes lights a match and strikes at the snake. The flash of the match should have been nearly blinding to eyes accustomed only to deep dark. It’s unlikely that Holmes would immediately recognize the snake and accurately lash it.

Snake Handling – Didn’t Holmes take a huge risk in reaching out and grabbing the dog-whip from Roylott’s lap? Watson has just stated that the adder had reared up in Roylott’s hair.

What made Holmes think it wouldn’t strike out and kill him? And was Holmes trained in snake handling, so that he could safely collar the snake and throw it in the safe?

Not His Best Work

As a result of Holmes’s actions, it’s quite possible that: Helen Stoner could have been physically abused by Roylott; Roylott could have heard Holmes and Watson talking in the next room, and Holmes could have been bitten by the snake coming down the bell pull.

Also, Holmes could have been blinded by the light of his match and not seen the snake; and he could have been bitten by the snake when he grabbed the dog-whip and/or when he collared the snake. It seems extremely fortunate that matters turned out well.

But let us consider: Holmes was clearly upset by Roylott’s physical abuse of his stepdaughter. Perhaps Roylott’s threatening of Holmes in Baker Street was received as a challenge. Holmes certainly had a prodigious ego. With the combination of circumstances present in this matter, did Holmes decide that he would end the contest with Roylott by claiming the ultimate victory? 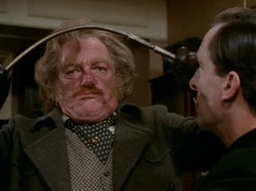 Regarding the points highlighted above, did Holmes show poor judgment or did he take every action in such a cunning way that it was highly probable that Roylott would be dead when the affair was ended?

I leave it to those with a more romantic turn of heart to speculate on Holmes’s actions being prompted by any designs he may have had on the engaged Helen Stoner.

It’s Elementary – I’ve already posted about how this story was turned into a play by Doyle to save himself a small fortune. The play was also the basis for Raymond Massey’s 1931 Holmes movie. Douglas Wilmer’s 1964 television version was such a success that the BBC turned it into a series, with Cushing succeeding Wilmer for the second season.

Even after all these years the business still preys on my mind. Poor old Watson! One could conjecture that he bears some small part of the blame – a good-natured if dull soul, was it so inevitable that he end up the butt of some childish prank on my part? I who was constantly looking for ways of ameliorating my boredom? He says the business took place early in the April of ’83. The date, to be precise, was April 1st. The idea was entirely my own. I hired two actors, got them to spin Watson a pretty tale, and then whisked him down to Surrey. The trick itself was easy enough. I had the room altered beforehand. The snakes – there were, in fact, two – both being made of India rubber, one which ‘Dr Roylott’ tied about his head, the other which was carefully lowered via a fishing line through the ventilation shaft. The match, supposedly intended to expose the creature, was actually meant to blind Watson to its shortcomings – and in this respect, did its job admirably. My courage regarding the reptile can thus be viewed in a somewhat less heroic light, as indeed can my indifference to the fate of poor Ms Stoner
I meant to tell him the truth afterwards. I swear I did. But the whole absurd charade so appealed to his sense of melodrama that he spent a week scribbling it down on paper, by which time I had neither the courage nor the inclination to disabuse him. Mea culpa, mea culpa, mea maxima culpa!

[…] The Speckled Band: He’s Done Better – Holmes didn’t exactly tear it up in one of his most famous stories […]