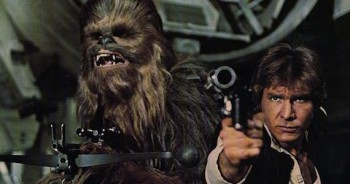 As with most “BIG EVENT” movies, from the first day the new Star Wars film was announced, fans, critics, and Hollywood pundits have been speculating about what the storyline will be. The rumor mill is in full gear and so it will go until the first previews are actually screened late next year. The studio and filmmakers have been playing their part by keeping everything mum, hush-hush, top-secret —  confidential scripts and non-disclosure clauses in actors’ contracts (on threat of being tossed into a rancor pit). The usual.

So when Harrison Ford broke his leg on the set a few weeks back (as I’m sure most of you have heard), the Hollywood gossip machine was already fired up and spitting out rumors on cue.

First, though, if somehow you missed it, this is what happened: Apparently, a door on the Millennium Falcon fell on him. And pause for a moment here to let that sink in. Could you have imagined, ten years ago, that in 2014 you’d be reading about Han Solo breaking his leg on the Millennium Falcon? The Falcon is undoubtedly a bit more dangerous to navigate when you’re 72 years old — but who would have thought that old space smuggler would be back on the big screen? Ford has vehemently insisted for the past THIRTY years that he would never again reprise the role that made him famous. The prequels came and went, and the clock kept ticking, and George Lucas said he wasn’t going to make any more films, and most people just naturally assumed that Ford was probably correct. But — surprise — Han Solo is back!

And then he breaks his leg. 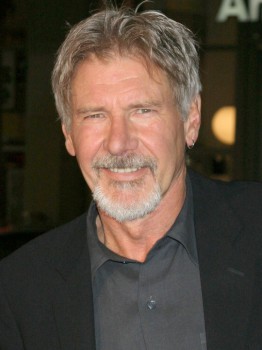 Back to that Hollywood rumor mill, because it’s pretty amusing, and sometimes flabbergasting, what it spits out. Within about a day of the news breaking about a limb breaking, one rumor got some traction that J.J. Abrams (who is helming this re-launch, as he did with that other venerable sci-fi series) approached his buddy Tom Cruise to come on board in a role that would be written for him into the script. The reasoning behind the rumor was that Cruise’s character could carry some of the action in lieu of Ford, and that Disney (the studio that bought the franchise from Lucas) was looking for some more star power, given that the project’s biggest A-list star (Ford) was now going to be reduced more to a cameo part.

Not only is that rumor probably not true, the rationale doesn’t even make sense. With a franchise like Star Wars, Star Wars is the star draw. And even though Ford is the only surviving member who went on to superstar status, the fact that virtually the entire original cast is back on board has a cumulative impact greater than the sum of its parts.

In short, you don’t need Tom Cruise. (And that “short” was not a pun on Cruise’s height, but okay yes it was. I was going to type “in other words,” but then I thought Hey, it’s Tom Cruise, so…“in short.”)

However, Ford’s injury on set did unwittingly reveal an insight to the new film — and not just that the Millennium Falcon is still flying thirty years after the toppling of the Empire (although maybe it’s not holding up quite so well, with doors falling off and whatnot). In fact, it tips us off to something that is, at least to this armchair analyst, quite significant.

Note how the studio immediately assured the Hollywood media that Ford’s injury would not delay shooting. Even though he would require a couple months of rehab, they could “shoot around” him, giving some of his action to another actor (who is believed to be playing the role of Han’s son) and rescheduling some of his scenes for later filming. A week or so went by, and then the news broke that filming would, indeed, be delayed by two weeks. Even with the aforementioned juggling, Ford’s being temporarily incapacitated put the whole production on the kibosh for at least half a month.

Quite simply, what this reveals is that this is no “cameo” role akin to Leonard Nimoy/Spock in the first new Star Trek film. Rather, Han Solo was (and presumably still is) a major protagonist in the first post-Lucas Star Wars film.

And for long-time Star Wars fans, that’s a pretty big deal. I also think it shows Abrams’s good instincts, which he has demonstrated pretty much every step of the way. First off, he brought back the old cast, creating a bridge between original fans (people my age) and a new generation that will be seeing Star Wars on the big screen for the first time. Second, he brought in Lawrence Kasdan to helm the script. Kasdan wrote the screenplay (based on a treatment by the incomparable Leigh Brackett) for what is far and away the best of the first six films: The Empire Strikes Back. Fans have been clamoring for thirty years for more Star Wars, old-school Star Wars, which the prequels did not deliver. Abrams has obviously made it his mission to deliver, and that apparently entails a third choice: bring back Han as a major character.

This move would seem to compensate for the fact that Han Solo was the character most conspicuous in his absence over the last three films. I don’t just mean the character personally, but that character type: the wise-ass space pirate (with a secret heart of gold) who would shoot first but who would also return to put his life on the line in the final showdown, not for the sake of the Rebellion, but for his friends.

The Solo part was also the stand-in for many in the audience: skeptical of all the mystical mumbo-jumbo about the “power of the Force,” he delivered wisecracks that injected humor into all the melodrama and, consequently —  by treating it all as somewhat silly — made it easier for us to suspend disbelief and go along for the ride (because here was a character within the world of the movie who was expressing how hokey some of it sounded).

In the three films Lucas unleashed in the early 2000s, not a single character filled this role. I guess Jar-Jar was meant to provide some comic relief (oops), but he certainly never could have fulfilled this other role of being the down-to-“earth” (so to speak) guy who was more like us, and not a stoic Jedi knight or a robot or a bizarre alien. Given how much weight Lucas allegedly gave to following storytelling archetypes a la Joseph Campbell’s Hero’s Journey, this oversight was somewhat baffling to me.

Abrams is obviously planning to make up for lost time.

And now I’m going to prognosticate. I’m going to make my predictions based simply on the following two facts culled from this recent entertainment news:

A) Han Solo plays a major role in the new film

From those two items, this is what I predict:

1) Han Solo is going to die in this film.

2) His death will play a catalytic role in his son’s journey.

3) His son will be a major character in the new films. He will be a conflicted character combining his father’s piratical devil-may-care attitude with the strong influence of the force inherited from his mother (Princess Leia) and his maternal grandfather (you-know-who). Somehow his father’s death will compel him to confront the dark side of the Force, in whatever form it now threatens the galaxy.

Okay, folks, let’s meet here again in a year-and-a-half and see if I was right.

Are you predicting that Han Solo is killed when a door on the Millennium Falcon falls on him?

You know, I did wonder if they couldn’t work his leg break into the story as a battle injury.

If my surmise about Han dying is correct, that could be a reason why they wouldn’t want the character to suffer a major injury beforehand — it wouldn’t be a “cathartic” injury, one where the audience reaction is “Oh, he suffered a terrible wound but — thank goodness — he pulled through!”

George R.R. Martin and HBO can get away with physically and psychologically torturing popular characters before killing them off, but with a character like Han Solo and a franchise like Star Wars, that wouldn’t fly. Han would have to go out on top of his game, in a blaze of glory.