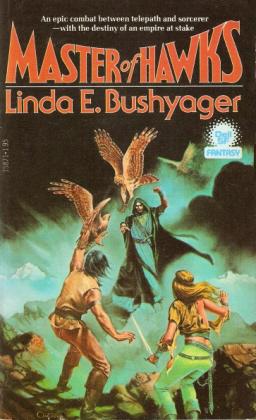 Thursday’s article on Theodore Sturgeon’s The Stars Are the Styx reminded me of other Dell paperbacks we used to read, collect, and pass around enthusiastically in 1979. Perhaps the most popular was Linda E. Bushyager’s Master of Hawks.

Linda Bushyager is forgotten today. She wrote only two novels, Master of Hawks and its loose sequel, The Spellstone of Shaltus (May 1980), before vanishing, like J.D. Salinger. But she was far from forgotten among fantasy fans in the early 80s, who found her pair of novels set in the magical Eastern Kingdoms original and a lot of fun. Here’s the back cover blurb for Master of Hawks.

War of the Wizards

Backed by the power of the world’s mightiest sorcerers, the forces of the Empire marched on the Kingdom of York. But York had its own wizardry… including the telepathic gift of young Hawk, who could control every kind of bird — and more, see through their eyes.

The key to York’s survival was an alliance with the Sylvan — mysterious forest dwellers who mistrusted all humans — and to win their friendship, Hawk embarked on a quest deep into Empire territory, where only his mastery of his winged comrades could bring him through alive.

Master of Hawks was published in July 1979 by Dell Publishing Co. It is 256 pages, originally priced at $1.95. The cover is by Maelo Cintron. It remained out of print for nearly 30 years, before being reprinted by Fantastic Books in trade paperback in April 2010. There is no digital edition.