May’s come and gone by several weeks, but I’m only just getting to the short fiction review now because, well, I was busy with stuff. I’m glad I’m finally getting around to it, though, because there were some really ace stories last month and I hope I can convince you to check them out for yourselves.

Swords and Sorcery Magazine #28 starts off with “The Witch of Anûn” by Raphael Ordoñez. It’s the third story of his I’ve read in the past year (both reviewed here at BG previously), all set on the world Antellus, a “paleozoic counter-earth at the cosmic antipodes.”

Cuneaxe has brought his daughter, Una, to a thaumaturge to cure her of an “infestation.” When this fails, he is sent to a temple in the swamps. The clerics there send him in search of the titular witch. Willing to do whatever’s necessary to save his daughter, Cuneaxe journeys to the witch’s home. There he will meet danger he is willing to face and a deal he’d rather not. 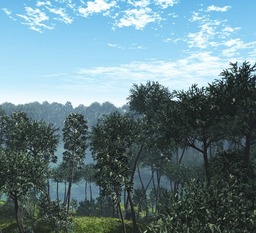 I’ve enjoyed all of Ordoñez’s Antellus stories independent of one another. They possess a beautiful and dark strangeness, both in characters and setting, that I like very much.

His use of Paleozoic flora and fauna makes Antellus feel at once familiar and alien:

The watery crypt received him. The hemlathim were huge, like bald cypresses in the trunk, but with many-legged raised roots and long, leathery leaves. Giant mussels lay half-buried in the clean sand. Tentacled belemnites jetted through the shadows.

Taken together, a larger world is coalescing out of these stories. Bits and pieces of history have been revealed, religious sects and heresies have been alluded to, and dangerous races have been shown to dwell just beyond humanity’s settlements. There’s an intoxicating quality to the world he’s created and with each story I’m increasingly, willingly, being drawn into it.

S&S #28’s second story is the very short (just under 2,000 words) “Narrows” by Jay Requard. The survivors of a band of mercenaries are hired to hunt down a group of bandits and their sorcerous leader, Hamadin. It’s got a nice bit of action and the protagonist, Jishnu, is a decent iteration of the thoughtful professional soldier. My only problem with the story, and perhaps you have to live in the Northeast for this to matter, is that the mercenaries are called the Grinders and it made me imagine sword-wielding sandwiches.

Beneath Ceaseless Skies had one very fine heroic fiction tale during the month of May. The rest were the usual high quality assortment of all sorts of other sf/f fiction. BCS is always put together beautifully and graced with stunning artwork on its front page. May’s picture is called “Kaybor Gate” (click here for full view) and is by artist Alex Ries.

In BCS #148 Garnett Elliot, another author I’ve come to look forward to, brings back the assassin Senjam and a world modeled on Indo-China in “Celestial Venom.” I first encountered Elliot’s wily killer last December in S&S #23 in a fun story called “The Devil’s Mandala,” which was made extra fun by the presence of killer monkeys.

Senjam has been given a mission by the Grandfathers, the rulers of the assassin’s order he belongs to:

Most unworthy Grandsire, debased Taker of Lives, you are charged to travel to Mount Muhundyana and there obtain that rarest poison, the venom of the Gopti Serpent. No great quantity is required. Be aware that agents of the Raj may have already been dispatched to thwart you in this matter. 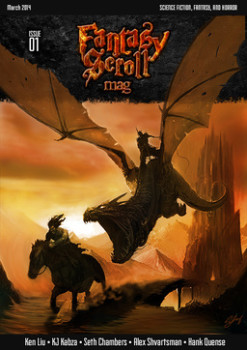 Senjam arrives at a great tea plantation under the heights of Mount Muhundyana with little to go on besides the directive of the Grandfathers. On the plantation, he meets a serpent charmer employed by the owner to protect his workers and a blind Brahmin. These encounters are followed by a duel between assassins both good and bad, third-eye fu, and a serpent of unusual size. And tea.

Last month, I said I’d review the brand new magazine, Fantasy Scroll. Well, it’s pretty alright and I’ll buy it again. I want to support as many publishers of good short fiction as I can. But for a reviewer of heroic fantasy, there wasn’t much there. I mean, c’mon, you put a great big snarfing flying dragon chasing down a guy on the cover and then no heroic fantasy inside. To be fair, there was some very good content, but still, I felt all sorts of let down.

The closest the magazine gets to S&S is “Letters to the Editor of Tempestas Arcana” by Alex Plummer. It’s not so much a story as a clever riff on wizardry, magic, and an editor’s defense of tradition in the thaumaturgical publishing arts. It served nicely as a digestif to the longer tales in S&S M and BCS.

Another month and another batch of stories. There’s bound to be one of them that’ll please you, so please go out and read them. I know I say this every month, but if heroic fantasy short fiction is to survive, there’s got to be people reading it and letting the authors know their work is being enjoyed.

[…] I first encountered in his story “Narrows” from S&SM #28 (reviewed favorably by me here at Black Gate). It continues the adventures of a battle company called the Grinders. Last time they […]