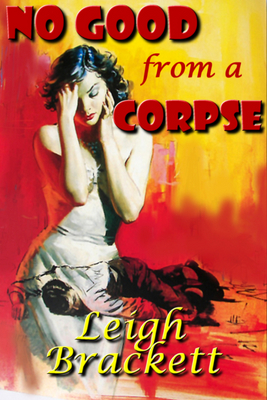 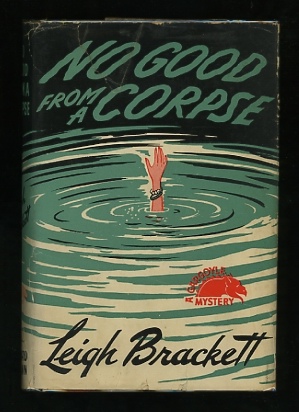 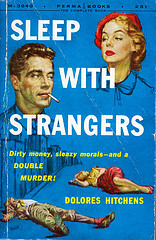 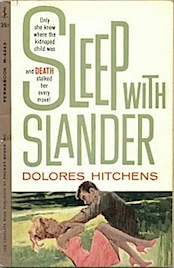 The other female writer I wish to single out for attention is Dolores Hitchens. An American mystery writer in the Agatha Christie tradition, Hitchens also authored two novels featuring middle-aged private eye and recovering alcoholic, Jim Sader. Sleep with Strangers (1955) is a solid private eye thriller, while Sleep with Slander (1960) is an unheralded gem and one of the earliest thrillers to focus on child abuse and the exploitation of children as its theme.

Brackett may be better known, but Hitchens’s two forays into the hardboiled tradition with the Sader books earn my vote as the better efforts. At no point does Hitchens attempt to emulate Chandler or Hammett. Sader’s age and vulnerability to alcohol set him apart from his partner in the agency and other hardboiled heroes. What is more, Hitchens manages to still write straight hardboiled thrillers even with an evident woman’s touch in delving deeper into her characters and their world. Whether uncovering the damage done by small town gossip or looking at how stereotypes destroy the lives of various individuals and those in their sphere, Hitchens writes with all the sensitivity of Ross Macdonald, or his wife and fellow mystery author Margaret Millar, but without their sometimes heavy-handed Freudian approach.

Maxim Jakubowski had the good taste to select all three titles for reprinting in the Blue Murder line of trade paperbacks he edited in the UK a quarter of a century ago. Poor public domain copies of No Good from a Corpse are easily obtainable on Amazon or eBay. Hitchens’s pair of titles will take more hunting, but are well worth the effort. These two ladies prove the hardboiled genre was not an exclusive boys club. Brackett could mimic Chandler well enough to pass for a forgery while Hitchens will leave readers lamenting the fact she only gave us two such gems to treasure. Happy hunting to those with the good sense to seek out the hardboiled classics by these two very classy dames.

Thanks for witing this. I’ve read most of her sci-fi and have always meant to read this one. Thanks to your review, I just ordered the $1.00 Kindle version from Amazon.