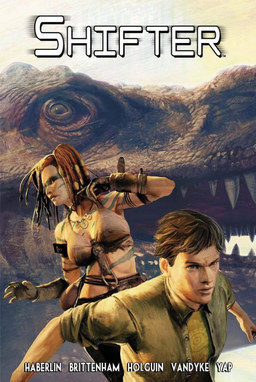 When attending an event as gi-normous as Chicago’s C2E2, if you come upon a booth with a crowd so large you can’t get close enough to see what is going on, it can only mean one of two things.

Either the girls from Gorilla Tango Burlesque are promoting their Star Wars: A Nude Hope girlie show again or someone is demonstrating something truly amazing.  And though Black Gate photog Chris Z was hoping for the former, in this case it was the latter.

To start with augmented reality, or “AR,” is defined by the Mashable tech site as:

A direct or indirect view of a physical, real-world environment whose elements are augmented by computer-generated sensory inputs.  As a result, the technology functions by enhancing one’s current perception of reality.  Unlike virtual reality which replaces the real world with a simulated one, augmented reality is in real-time and in semantic context with environmental elements. With the help of advanced AR technology (e.g. adding computer vision and object recognition) information about the surrounding real (or in this case “comic”) world of the user becomes interactive and digitally manipulate-able. Artificial information about the environment and its objects is overlaid on the “real” world.

Translated, this means by downloading a free companion app and pointing your tablet or smartphone’s camera at pages in an AR comic, you can literally watch the art get up off the page and interact with you.

And this is what drew the insane crowd to the Anomaly Productions booth at C2E2.

The folks working the booth were armed with iPads connected to a movie-sized flat screen.  They were placing small, round stickers on the backs of visitors’ hands, then pointing the tablets at the stickers: at which point a 3D robot rose up out of the sticker and began explaining that he was your guide to the world of Anomaly Augmented Realty.

This jaw-dropping demo (I mean I literally saw visitors standing around slack-jawed) was what Anomaly Productions was using to promote their two AR-enhanced graphic novels, Shifter and Anomaly.  Creator Brian Haberlin gave me a close-up look at his Hitchcock-style, sci-fi action thriller Shifter, as the storyline fit best with my personal idiom.

Noah Freeman is just an ordinary guy, a low-ranking civil servant working for a government agency. He’s looking forward to a weekend hike alone in the local mountains, before spending some time with his fiancée. But over the course of just one day, his perfect world becomes a perfect hell.

An attempt on his life leads Noah to a remarkable discovery. It appears to be some type of ancient machine, and Noah’s presence awakens it. When he enters it, he’s not himself anymore – literally. He has the ability to inhabit the body of any creature that has ever lived, to experience the world with their senses, to even think as that creature thinks. With this strange new power, Noah sets out to unravel the dark threads of the mystery that has destroyed his world. But the truth leads him to a ruthless plot that will kill thousands unless he and the surrogates he inhabits can stop them. Does this ordinary man with an extraordinary machine have what it takes to save the world?

Shifter is a beautifully illustrated, 222-page hardcover graphic novel available in book stores and comic shops, which utilizes AR for an enhanced experience with your smartphone or tablet.  Twenty pages of the Shifter graphic novel currently contain AR and the coolest thing about this technology is that more pages will be added periodically without the reader doing anything at all.  Shifter is literally the first graphic novel that grows and changes after you’ve purchased it.

The creatures and characters of Shifter, which in some cases literally tear through the pages, are fully 3D interactive with sound and multiple animations.  And what do I mean by “interactive?”  Try poking the monster with the battle axe and find out.  Then after you’re done “interacting”, there is a “more info” button which leads you to the backstory behind the creature you just irritated.

If the thought of all this isn’t enough to cause a full-on geek-out, then allow me to further blow your mind but telling you that you can also experience Shifter via a “cinematic book app” on your smart device and that format is narrated by Star Trek’s Wesley Crusher himself, Wil Wheaton.

The AR concept is probably as difficult to envision as it is to explain, so enough of my trying to explain it.  Watch this short video and let Brian Haberlin show it to you himself.

Okay Black Gate comic gurus – mind blowing or am I just easily impressed?  Honestly, I can’t stop looking at this so post a comment, let me know what you think, then tell me if I’m alone in imagining other applications for AR.

You want to know what I think GC? The age of cable is over and the age of apps has just begun. That’s what I think. INTERACTIVE. “We can create things after publication.” “This technology is just getting started.” You are right Gothie, it is mind blowing.

Oh, and the Gorill Tango Burlesque sparked my interest too. Come on, apes, comedy, “art”…what’s not to love?