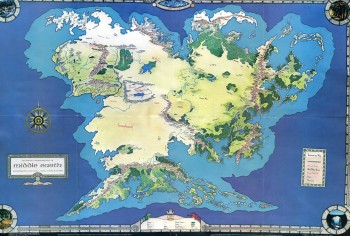 Have you ever designed a campaign and thought to yourself, ‘Damn, this is so good, I should build a company on it?’ Well, certainly you aren’t the only one, and dozens of game companies have been born from folk’s home brew campaigns, but it wasn’t until very recently that I realized that I.C.E.’s Middle-Earth Role-Playing was born of the same ilk.

Now before you all go running off to Twitter about Tolkien being a RPG nerd, you have to have the full understanding of what I’m talking about. First and foremost, Tolkien WAS NOT a gamer, but that didn’t mean that his world wasn’t ripe for table-top role-players to want to explore in the mid to late 1970s.

One case in particular came out of the University of Virginia in 1977, when then student Pete Fenlon decided he wanted to create a role-playing game around Tolkien’s world for some friends on campus.

My first question upon finding this out was, ‘Why didn’t you just play D&D?’ and Pete’s answer was simple: D&D simply wasn’t Tolkien. As an avid camper and backpacker, as well as a member of the SCA, Fenlon understood way too much about Tolkien to throw a campaign into a world of negative integer armor classes and D20 to-hit charts. 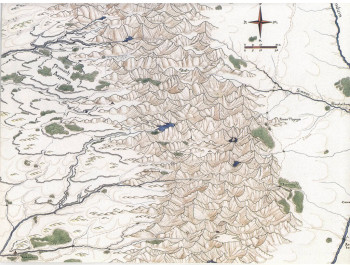 Instead, Fenlon began working on a new system that he could more easily blend to the travel-oriented nature of Tolkien (a common saying among the D&D crowd is it take 5 minutes to travel 500 miles and 5 hours to clear a 10 foot hex) Graph paper dungeon crawls didn’t adhere to Tolkien’s vision and they were at the very heart of D&D.

Thus, Rolemaster was born, a percentile-based system with a less invasive magic system and a penchant for open spaces gaming. To help his campaign along, Fenlon decided he make a map of Middle-Earth based roughly on the writings of Tolkien and when STI  lost the game license to Tolkien’s world in 1980, that very map was the main sales pitch he offered to the Tolkien Estate in his bid against TSR, who was also aggressively going after the license.

Now you might be thinking, TSR in 1980 was becoming the absolute ‘1000 pound gorilla’ of the industry and how could a gamer from Virginia outduel them on a prime gaming license?  Well, it really had to do with Gygax and TSR’s rocky relationship with the Tolkien Estate over the initial release of D&D where stuff like Rangers, Hobbits, Ents, Orcs, and all other manner of ‘borrowed’ titles went into litigation.

Since the Tolkien Estate didn’t like TSR, Pete and his incredible map, as well as his little Rolemaster system, won the license and the rest is history. 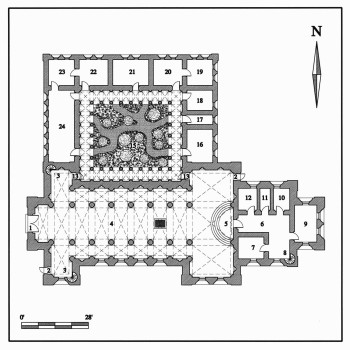 Yes indeed, MERP exists today because of a map and boy what a map it is. To this day, I still hold my copy in highest esteem and as I’ve moved through the world created by Fenlon and I.C.E., I can’t help by bring up just how important the maps of the world are in making it “The Prettiest Role-Playing Game Ever.”

Fenlon began his journey with MERP on the full world map, but his topographical artistry didn’t stop there.  Instead of packing up his pencils and brushes for a director’s chair at the company, he delved into the world with exacting detail. His interior color maps are astounding, each with a hand-spun flair that makes me want to weep when I consider the computer-generated drivel you find today.  There is a subtlety to each, and he did literally dozens of them over the course of the 1980s.

Topography was certainly a blindingly grand skill on the part of Fenlon, but he was also very gifted at creating city maps, the most incredible of which would have to be Tharbad. This map is so astounding, I’ve ripped it off on two different occasions and much prefer it for any standard medieval city setting, even when compared to Waterdeep or Lankhmar, both of which have fine gaming maps in their own right.

In the end, you can see the joy which Fenlon had in his craft and his passion for the subject matter. Even today, Fenlon still retains all his originals in a kind of organic homage to his journey from college student to CEO of Mayfair Games. One day, I hope to see one of his original works, but I fear that will still be a long time coming.

Teaming up with Pete in his epic quest to map all of Middle-Earth came the draftsman talents of Terry Kevin Amthor, who took on the daunting and not as glamorous task of mapping structures. Now where such a task might have been more prestigious in D&D, the work of Amthor didn’t have as much weight in a game designed around travel. 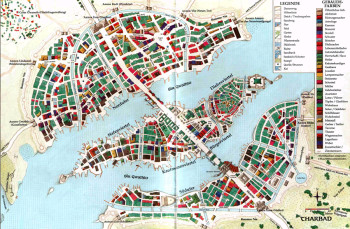 Still, Amthor’s work as an architect is outstanding, the rich style that encapsulates the style of Westernesse, as well as that of some incredible Elven design, makes me use his maps even today in other campaigns.

Art Director Rick Britton also joined the ‘fun’ on occasion with map contributions for products that needed an extra piece here or there. His work was also based in structure mapping, and although perhaps not as inspired as Amthor, the works still add wonderful depth to the universe and I’ve got no complaints about it at all.

When you finally couple these maps with the work of artists like McBride, McIntosh, White, Peregrine, Peale, and Danforth, how can one not just sit back and give credit where credit is due?  There is, and unfortunately never will be again, an astoundingly beautiful game like MERP that has kept gamers coming back for over thirty years. Frankly, if you ever intend to play in Middle-Earth I suggest these books being your basis, as even The One Ring has been handcuffed by the new rules of the Tolkien Estate and there are no longer avenues for expansion of the universe and interpretation from the more obscure canon like Unfinished Tales and the like.

In closing, this final chapter concerning the beauty of MERP completes a lifelong dream of mine. I’ve not only gotten to converse with all these incredible artists and designers, but also had the chance to view original work and hear tales very few today remember.  I hope all my readers have enjoyed this three-year journey, and I look forward to hearing about your next adventure in hopes it might be a quest in this fantastic world!

If you’ve missed any of the previous posts concerning MERP, you can click the following for Part One, Part Two, and Part Three.

Scott, this article almost brought a tear to my eyes, especially as the map at the top used to adorn the walls of my bedroom back in high school in the ’80s. Whatever happened to my copy of that map, I haven’t a clue, but wish I had it now.

I never had too much MERP stuff (and now it’s lost to the mists of history) but reading this article makes me want it all back.

As far as city maps are concerned, have you ever looked at Harn? They also did good stuff although the art itself wasn’t necessarily anything to write home about.

Loved the MERP modules. They did Tolkien great. We converted the stuff to D&D and played them that way. Oh, that cool cover for Court of Ardor…

Loved the MERP stuff and, Ty, I had that map on my wall for several years too. I have a box of MERP stuff in the basement and every now and then I look through it.

I bought the large map at a store on Cape Cod, but couldn’t buy the game locally and couldn’t afford to mail order it. Still have the map though.

I had that map on my wall as well. Never played MERP though. Some Rolemaster, but not MERP.

By the time I saw that map, I’d absorbed and annotated my copy of Karen Wynne Fonstad’s atlas of Middle Earth, whose maps resulted from years of her turning her cartography students loose on the Silmarillion and the Unfinished Tales. Fonstad’s maps still feel to me like the real Middle Earth geography, but the MERP stuff does have it beat for pretty.

I never played in a MERP campaign, but I used MERP products in many campaigns, Umbar, Isenguard, Moria, Angmar, etc found their way into several of my worlds over the years based mainly on the maps.

Many of which were Rolemaster based…especially after we wrote an excel character sheet to handle all the background math.

[…] I love them and use them until they’re falling apart at the seams. The lovingly detailed maps of Middle-Earth (the featured image is one of them) were one of my favorite things about the old MERP game. But […]

Is it possible to buy a digitized hi-res version of the map – or at least the southern portion containing Harad and adjacent areas? I AM STILL PLAYING both Rolemaster and MERP right – been doing so since the 1990s. I have a group I want to start in Bozisha-Dar but I’d like the “intermediate” scale maps to link up from Gondor to Harad. All I have are the piecemeal maps that come with the pertinent MERP modules. Any help you can give would be amazing. I reached out to Mr. Fenlon himself at Catan – maybe he will reply. I’d give it a Sheer Folly maneuver but you never know… 🙂
Daniel Gore
Professor of History
Arapahoe College
Littleton, CO
daniel.gore@arapahoe.edu