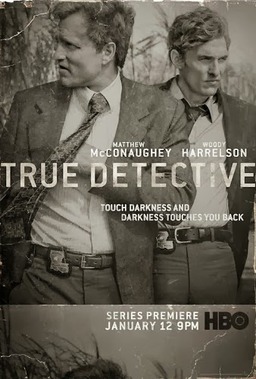 So everyone in my office has been talking about the new HBO show True Detective, starring Matthew McConaughey and Woody Harrelson.

They talk in hushed whispers. “Hey, did you watch last night?” Suddenly, the volume drops and all I hear is a low buzz over the cube wall. I hear enough to know they’re taking about McConaughey and that new HBO show — and they’re obviously riveted.

I haven’t seen it. Did see the cool ad and noticed how vastly different McConaughey looked, all gaunt in a suit. He’s really turned into an Actor’s Actor, what with terrific recent performances in Mud and Dallas Buyers Club. Although my favorite McConaughey film is probably Sahara. Man, my kids still spout quotes from that movie. Every day I hear, “Sit down… I’ll get the check.” (And, “Of course I brought the dynamite!”)

Anyway. I’ve been seeing a strange flurry of articles about Robert W. Chambers’s brilliant collection The King in Yellow crop up on Facebook recently, and I saw the headline of that io9 piece, “The One Literary Reference You Must Know to Appreciate True Detective.” But I didn’t really make the connection until I saw this article at The Daily Beast, “Read The King in Yellow, the True Detective Reference That’s the Key to the Show.”

The key to understanding HBO’s enthralling series True Detective might be the references to the Yellow King and Carcosa, which the killer Reggie Ledoux talks about and the show hints at to be figures and symbols of a satanic cult of some sort. But the Yellow King is an allusion to The King in Yellow, an 1895 book of horror and supernatural short stories by the writer Robert W. Chambers…

Holy cow… True Detective is based on The King in Yellow?

Maybe “based on” is too strong. It couldn’t be a direct adaptation of any of the stories. Not to spoil the book (or the show) for you, but… in the stories, pretty much everybody dies. You come into contact with the forbidden play The King in Yellow, and it’s over for you. It’s like library anthrax.

The article goes on to say:

There are a total of 10 stories, the first four (“The Repairer of Reputations,” “The Mask,” “In the Court of the Dragon,” and “The Yellow Sign”) of which feature a fictional lost play called “The King in Yellow”…

The King in Yellow has influenced writers like H.P. Lovecraft (who used it in his own stories), Neil Gaiman, George R.R. Martin — and now Nic Pizzolatto, the creator of True Detective and the writer of its dark, labyrinthine screenplay. 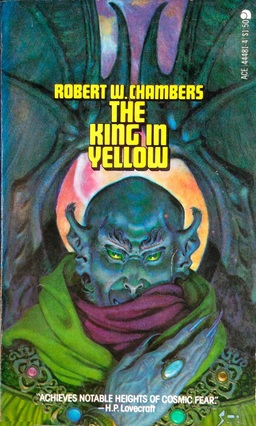 Can this be a real thing? Can there be an HBO show that’s really informed by one of the great early works of supernatural literature? Can they really be that hip?

Apparently, yes. The Wall Street Journal took notice after Robert W. Chambers’s original volume rocketed into the top best seller lists on Amazon this week and reported on the connection in their online edition this morning:

HBO’s True Detective, which stars Mr. McConaughey and Woody Harrelson as detectives investigating a ritualistic murder, has a distinctive literary bent. The show’s writer, novelist Nic Pizzolatto, has sewn steady references to The King in Yellow, a collection of short stories by Robert Chambers, into the show’s early episodes. From verbatim quotes to a motif of black stars, the links have already been obsessively chronicled by fans.

Yesterday on Amazon, The King in Yellow, shot up 71% over 24 hours to number seven on Amazon’s bestselling books list. The paperback version was published by Amazon’s CreateSpace Independent Publishing Platform in September, 2013, and the company has seen the book on the Kindle bestseller list.

Robert W. Chambers’s The King in Yellow is a classic of supernatural fiction. Lovecraft read it in 1927 and was so taken with the concept of “The Yellow King” — and the Lake of Hali and the Yellow Sign — that he co-opted them for his Cthulhu Mythos, mentioning them in “The Whisperer in Darkness” (1931).

Our roving reporter Matthew David Surridge reviewed the book for us in October of last year — proving that we’re more hip than HBO (by three whole months!). Kandi, send a basket of Macadamia nuts to Mr. Surridge. The chocolaty ones.

If you’re interested in reading The King in Yellow, it’s currently in the public domain in the US, and is available as a free ebook. Of course, we recommend you get the 1980 Ace edition (above right; click for bigger version), or better yet the 1965 Ace paperback. Because it’s beautiful.

You can also read the first four stories in their entirety at The Daily Beast link above. But be warned — don’t read them at night.

True Detective has been superb so far in every respect. So good only a hipster could dislike it.

Matthew McConaughey grew up to be a real actor? That’s a relief. His early performances didn’t do much for me, but maybe he’s found the role that reveals his brilliance. All this time, I found his acting persona to be a vapid prettyboy, and I took it kind of personally that the vapidity marred Contact. So yay, an unexpected good thing is happening in the world.

I’ve been meaning to read The King in Yellow ever since Surridge’s post. Now seems like a good time. One of the best small things about the internet age is that we can have chart rushes for books that are nearly a century old. Go Team Weird!

Oh yeah. As soon as I saw your post, John, I was hoping I’d open it and see the Jack Gaughan cover for the old Ace edition. Based on the original hardcover’s dustjacket, it’s darker and more majestically eerie.

I think the tidbits of the King In Yellow that Chambers drops into his tales are among the most evocative and delicious examples of hinted and insinuated horror in the genre.

Camilla: You, sir, should unmask.
Stranger: Indeed?
Cassilda: Indeed it’s time. We have all laid aside disguise but you.
Stranger: I wear no mask.
Camilla: (Terrified, aside to Cassilda.) No mask? No mask!

And ordinarily lurid pulp and men’s adventure is my cup of tea but I imagined they’d miss by the broad side of the barn… So I was going to wait for reviews before spending the time to try to watch.

But I LOVE Chamber’s stuff. Indeed, the quote John Hocking is putting out, I’m going to use. Sequel to a story I’ve written is set in Egypt around the time that if KiY were a real play it would have been around, so perfect background for the hero going to a ‘controversial play’ making the rounds…

So I’ll have to check it out!

I have been so riveted by this show; but I don’t have HBO! Instead I’ve been catching clips of it on Youtube and reading everyone’s commentary about it.

I first heard about all of this weird lit connection to the show a couple or three weeks back on Laird Barron’s blog. He linked to an Wall Street Journal article where Nic Pizzolatto (writer and producer of True Detective) cites Barron, Ligotti, as well as Chambers and Karl Edward Wagner as influences on his writing of the show.

I’m a huge Barron fan, and one of the many things that I love about Barron’s stuff is the noir and crime fiction angle he brings to weird horror. Needless to say, True Detective is a dream come true for weird horror and noir!

I can’t wait for the DVDs!

I look forward very much to this show!

I’m not a huge movie buff, but I’ve actually loved McConaughey in the few movies that I’ve seen him in. A View to a Kill, though older, is a pretty awesome movie. Along with McConaughey it has Sandra Bullock, Samuel L. Jackson and Keifer Sutherland.

I also think that McConaughey is pretty awesome in a the few action movies that I’ve seen him in. Reign of Fire is a pretty cool dragon movie. For a popcorn movie, I think Sahara was actually quite good. And the submarine war movie U-571 is also a pretty awesome McConaughey flick.

Given the comments I’ve heard concerning his romantic comedies, I’m glad I haven’t seen any of them.

Haven’t seen True Detective yet — I’ll have to wait for Netflix. But I love the fact that Harrelson and McConaughey are teaming up if for no other reason than that I always regarded McConaughey as the emergency back-up Harrelson.

2014 has barely begun and already this is my top pick for the year.

McConaughey is an absolute standout, but it’s Harrelson’s performance of the flawed cop which really surprised me with his humanity. The King in Yellow references are seeded through quite nicely, and some of McConaughey’s character’s nihilistic world view nicely matches Lovecraft’s.

I wonder whether the solution to the story involves any supernatural element/agency, but regardless, the show is fantastically directed, tautly written, and the two leads deserve all the plaudits to come. The only flaw is the utter lack of any strong women, other than Harrelson’s wife.

Watching it reminds me of Laird Barron again and again – muscular prose, men’s men, sudden violence, all set against an alient, hostile universe.

You’re a brave man to put in print (or e-print) that Sahara is a favorite. Clive Cussler hated what they did to his novel so much he sued the film company. It certainly was quite different from the book (it was a great series until Cussler let his son take it over. He doesn’t have his dad’s writing chops).

All good points, here, but I think the important thing is: chocolaty macadamia nuts!

[…] Maybe not. Though the recognition will be significantly higher among readers of this site, for the general public his is a pretty obscure name (at least until a major HBO series drops references to his work, a la True Detective and Robert W. Chambers). […]

Black Gate » Blog Archive » The H.P. Source: Why I Chose Mythos and Magic to Launch my Publishing House.

[…] with the regularity of jellyish monstrosities drawn to a resonator, the well-received TV drama, True Detective, teased elements from The King in Yellow, which was a huge influence on Lovecraft’s own writings, […]