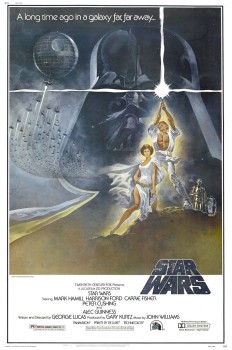 A stray memory — triggered by seeing the first 1977 Star Wars theater-lobby poster on Antiques Roadshow (value $2000!) — made me wonder if a certain time-killer of my childhood was as common as I’ve always just assumed it was. What better place to conduct an informal poll than here at Black Gate — an audience comprised of readers with common interests and shared cultural experiences?

On the left side of the vintage image (so iconic, indelibly impressed upon my generation’s psyche) one sees dozens of x-wing fighters flying in to attack the Death Star. That’s what triggered the memory of a pastime common among my male peers in preschool.

During arts and crafts or any downtime where we were given access to paper and pens/ pencils/ crayons, a perennial favorite was to draw a whole fleet of Rebel x-wing fighters facing off against a fleet of Imperial tie-fighters (Colonial vipers and Cylon raiders worked just as well). That was not the end product, no sir. That was the set-up. The battle would begin, the image soon obliterated as lines were scrawled from the firing vehicle to its target, followed by violent scribbling over of said target to indicate it had exploded. What one was left with was a sheet covered in lines and scribbles, with maybe one or two of vehicles of the victorious side still visible. [Examples follow the “Read More” jump.]

I do seem to recall that this bit of on-paper play was occasionally shared with a partner (the first nascent impulse to table-top wargaming?), but mostly I remember it as a solo activity. It certainly was not my idea, but one I learned by observation. I can’t remember doing this after I could read and write, though, so we’re talking strictly preschool and kindergarten. (Evidently the inherent concept of imagining or re-enacting a battle on paper would later be channeled into structured games.)

But it wasn’t until my recent recollection of this fond little diversion that it occurred to me: was this a widespread activity, or was it regional?

Was it something only kids at my preschool did?

I’ve done enough research of urban legends and folklore to doubt it. If kids are doing it somewhere, they’re probably doing it everywhere. Long before we were able to text and tweet and post to Facebook, we were somehow able to disseminate our culture far and wide as if by mystical winds and magic fairy dust. Even before the Internet, you could go to nearly any school in the country and ask the kids what happens if you go into the bathroom and say “Bloody Mary” five times, and they’d have a ready answer. Likewise, you could hear all the dead baby jokes you’d care to hear. And there were playground putdowns and jump-rope rhymes that no adult ever uttered, yet could be heard at recess from Phoenix Arizona to Providence Rhode Island. (How did that work, anyway? It’s a question that folklorists and cultural historians are still fascinated by, gathering data to debate various theories. My own guess: goblins. Little invisible goblins that went around whispering all that stuff in our ears.)

A further question: is this particular activity — the pen-and-paper dogfight — unique to my generation, or did prior generations do essentialy the same thing, playing out their own imagined dogfights and WWII battles with planes and tanks crudely penciled on notebook paper? As far as whether any kids do it anymore, I would guess that the activity — however widespread it may have been in the ‘70s — was superseded in later generations by video games.

So, readers, please respond. Anyone else recall doing this? And if you grew up prior to Star Wars and Battlestar Galactica, did you do something similar with earlier versions of vehicular warfare?

Wasn’t just you. Although for whatever reason I tended more towards WWII airplanes. (And didn’t quite twig to the fact that the Germans flew different planes than the Allies — just gave everybody B-17s.)

Joe, what part of the country did you grow up in?

Never heard of this activity (or don’t remember it) and I was 8 when Star Wars came out.

Southern MN. Probably right around the time that Star Wars came out. At this point I have no idea of where I picked up the notion to do it.

I remember distinctly drawing with friends on big sheets of paper battles between Godzilla, Yongary and all the other monsters shown on WABC’s 4:30 Movie Giant Monster Week. These battles also included all the necessary tanks, beam projectors and jets we could jam in. This would have been 4th grade in 1975. On my own I drew battles with plenty of WWII tanks and planes of both sides. By the time Star Wars came around we’d pretty much stopped this sort of drawings.

Joe: I grew up in Phoenix, AZ, so we have some pretty wide coverage there.

James, what part of the country were you in? It would be interesting to find this was only prevalent in certain regions of the country. Maybe some of our friends who grew up in other countries could weigh in and see if it was transnational.

I was in grade school at the time and we did something similar, though if I’m reading your text right, there was more of an element of chance in the way we play. When it was one’s turn, you would place the graphite (or lead or whatever it really was) tip of your pencil on the ship you wanted to fire that turn, then you would place a finger atop the eraser; after that you’d kind of take aim by angling the pencil, then push down on the eraser to “launch” the tip toward the enemy target. Most times the line drawn wouldn’t reach the first time, so we’d consider that moving the ship ahead a little, and you could launch your next singular attack from that point. If any of that made any sense to anyone but me.

To add to affirmations from Joe, Fletcher, and Ty, here’s what a friend of mine who grew up in Minnesota texted me today:

“Of course I did it, Nick. And I’m pretty sure my own boys (13 and 10 right now) also do it, even though they’re en-ambered in the “video game” generation. Our generation was the beginning of it anyway, and we did it. And I think my own kids still do it because they don’t have video games in school. Well, they’re not allowed to play them, most of the time, anyway.”

My wife, who grew up in MN, had never done or even heard of it, but my assumption is that it’s a very gendered activity, and one virtually no girl ever engaged in.

@Ty: I do vaguely recall doing something similar at some point, which sounds like the next step from just drawing things on paper and “blowing them up” to something more like a structured game.

Definitely did this with my friends in elementary and middle school (during the 1990s).

What part of the country, Allandaros?

Wow, I did something like that in very rural TN in the 70s.

Each person would take turns drawing tanks/planes/stickfigure army men, until some number was reached, then each player would take turns placing their pencil at the barrel of one of their drawings, closing their eyes, and sweeping the pencil across the page, until all the figures on one side or the other was “killed”.

I used to see kids in school do this in Ottawa, Canada. I always thought it was a local thing! Thanks for setting me straight.

We used to do this (and a few variations) when I was in elementary school in the late 1970s, in upstate NY.

The main variation I remember was to fold a piece of paper in half, then each kid would have one half of the unfolded paper to draw their spaceships and/or men on. Then you would make a really dark dot on your side of the paper, trying to line it up with a ship on the other side. The you would fold the paper along the dividing line and scribble hard on the back side of the dot, transferring the graphite onto the opponents side, and hopefully “hitting” one of their ships. Repeat until one side is completely wiped out.

I was also fond of drawing kaiju or dinosaurs vs. spaceships. That got me into trouble more than once, when I should have been doing classwork.

When we had these little skirmishes, it was usually tanks and artillery. At one point, there was an elaborate campaign system with factories and production rates.

@ TW, John, and Rich: It looks like this was a pretty widespread activity, at least throughout North America. And Rich — I can relate to this: “I was also fond of drawing kaiju or dinosaurs vs. spaceships. That got me into trouble more than once, when I should have been doing classwork.”

@ S. Hutson Blount: It sounds like you and your friends really took it to the next level — essentially creating a proto-wargame.