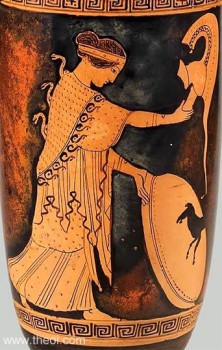 Even among the gods, Athena is an extraordinary figure. She is born fully formed and fully armed out of her father’s head. As one of the virgin goddesses she is almost completely independent of masculine control, which is always astonishing in the Greek world.

She reflects a fascinating series of attitudes. As the goddess of wisdom, she and Aphrodite are completely foreign to each other, so much so that in one poem, when Athena is Aphrodite’s house she is literally unable to speak. (Wisdom and desire are completely incompatible with each other, you see.)

And in this latter capacity, she is Odysseus’ patron goddess, the one who advocates for him with the other gods (because he does a pretty spectacular job of offending them), protects him, advises hi, and on at least one occasion throws susceptible young girls his way so that he can sweet-talk his way into a ride to Ithaca.

Every great hero needs a powerful patron, and the relationship between Athena and Odysseus is one of the two most important in his life. It’s a playful relationship, one in which they are constantly testing and teasing each other. She chastises him, he taunts her back, but their tone is always warm, even affectionate:

“But by and by Minerva came down from heaven in the likeness of a woman, and hovered over his head saying, “My poor unhappy man, why do you lie awake in this way? This is your house: your wife is safe inside it, and so is your son who is just such a young man as any father may be proud of.”

“Goddess,” answered Ulysses, “all that you have said is true, but I am in some doubt as to how I shall be able to kill these wicked suitors single handed, seeing what a number of them there always are. And there is this further difficulty, which is still more considerable. Supposing that with Jove’s and your assistance I succeed in killing them, I must ask you to consider where I am to escape to from their avengers when it is all over.”

“For shame,” replied Minerva, “why, any one else would trust a worse ally than myself, even though that ally were only a mortal and less wise than I am. Am I not a goddess, and have I not protected you throughout in all your troubles? I tell you plainly that even though there were fifty bands of men surrounding us and eager to kill us, you should take all their sheep and cattle, and drive them away with you. But go to sleep; it is a very bad thing to lie awake all night, and you shall be out of your troubles before long.”

As she spoke she shed sleep over his eyes, and then went back to Olympus.“ (Odyssey 20, tr Butler)

The Odyssey sets a tone for relationships between heroes and their patrons that will be repeated throughout heroic literature until today. If you’re a fan of Vlad Taltos, for example, you’ll see shades of his relationship with his own patron Verra.

Much of it has to do with the kind of hero Odysseus is. In gamer cant, he’s not a tank, although his prowess in battle in legendary. He’s a rogue, an intellectual hero who would prefer to trick his way out of difficulty rather than fight his way out. That kind of unorthodox hero requires an unorthodox relationship with the divine, someone who can give the gods shit and not get struck by lightning.

After all, if our hero can’t outsnark the gods, what kind of respect does he deserve from us mere mortals? 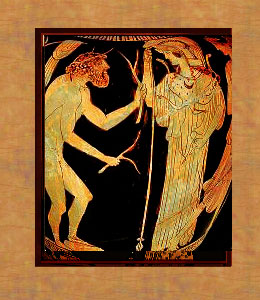 Who’s your favorite rogue? I have to confess to this being my favorite hero type from… well, I was born in 1978 and my earliest memories are of making people play Star Wars with me, so I think we can safely say that Han Solo is one of the single most formative figures of my youth. Those who know me are now nodding and saying, “So THAT explains it…”

As I sit here with a single malt to welcome in the new year, I must admit that I have a range of favourite rogues. I shall order them by category…

For heroic rogues, it has to be Odysseus, although if we include the gods, the deviousness of Hermes as a child is hard to beat.

For classic S&S rogues, at least competent ones, nobody can match Fafhrd and the Gray Mouser; but I admit a soft spot for Cugel, who amuses me greatly despite his vain and dishonest personality.

For movie rogues, Harrison Ford is rarely surpassed, but I prefer Indiana Jones – the antithesis to archaeology, a tomb robber always after the treasure rather than knowledge.

I have others, but I think my list so far is long enough!

Lesser known fact: Odysseus is the great-Grandson of Hermes! His father, Laertes, was the son of the great Autolycos.

How does a discussion on Athena become a pick your favorite rogue?

Because it’s a post about the relationship between Athena and Odysseus, and the reason she loves him is because he’s a rogue? The series is about the invention of tropes in the ancient world, and Odysseus is the original.

It should have been made clearer in the introduction that Athena’s relationship with Odysseus (or heroes in general)is the topic of the post.

Hmm. My favorite rogue? In literature, it has to be Andrew Offutt’s Shadowspawn character from the Thieves’ World series, though Steven Erikson’s Tehol Beddict is a close second, though he’s a different type of rogue (in gamer speak his main stat would likely be Charisma with INT and WIS not far behind, instead of, say, DEX or STR).

In film, for the sheer fun of it, I have to go with Jack Burton. Because he never drives faster than he can see.

So many to choose from: Yes, Cugel and Fafhrd & the Gray Mouser. And I’ll add Vlad Taltos and Mal Reynolds into the mix.

(And I’ll also note in passing that one of the fundamental problems with the Star Wars prequels was that they didn’t have a Han Solo analogue character.)

Mal Reynolds! Yes, though I don’t know that Athena would be his patron goddess. I think Hestia may be secretly rooting for him.