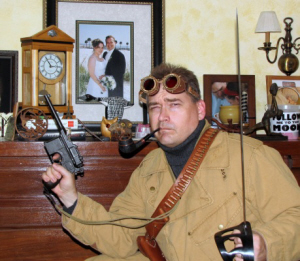 We last saw E.E. Knight’s hero, The Blue Pilgrim, in the acclaimed “The Terror of the Vale” — one of the most popular stories we’ve ever published. He first appeared in Daniel Blackston’s 2004 heroic fantasy anthology Lords of Swords; here’s Todd McAulty’s review from Black Gate 8:

The real payoff in Lords of Swords comes from three long pieces by three different writers, any one of which could stand alongside the work of the masters mentioned above — and all of which deliver on the promise of the best adventure fantasy: strong characters, fast action in colorful settings, and genuine flair and wit…

Finally, we have what may be my favorite piece: “That of the Pit,” by Vampire Earth novelist E.E. Knight. The Blue Pilgrim is a rebel against the cruel rule of the Sayhrae, and a practitioner of The Way, an ancient devotion that gives him considerable martial prowess and subtle mental arts. But he is virtually alone in his battle, and when he’s captured he discovers the dark sorceries of the Sayhrae are not all masquerades. The climax of this tale is one of the most effective I’ve read in a long time.

We’ve long been fans of “That of the Pit” and we are pleased and delighted to be able to present the story to you in its entirety online for the first time, as part of our Black Gate Online Fiction library.

“That of the Pit” is a complete 6,300-word short story of heroic fantasy offered at no cost.

[…] Blue Pilgrim, last seen in the Lords of Swords tale “That of the Pit” — which Todd McAulty said “could stand alongside the work of the masters like […]

Really have to get you an author pic other than my Zep pirate cosplay one. The only thing that can be said for it is that the people who know me personally say “yeah, that’s Eric all over and then some.”

I wasn’t aware that was a cosplay shot. I thought that was your writing garb.

A) Not a functioning gun.
B) It was pretty common back then to be photographed with your firearm, finger on trigger. I’ve no idea how many photographers were accidentally killed that way.

[…] In third place was Mark Rigney’s “The Find,” part of his perennially popular Tales of Gemen series; fourth was E.E. Knight’s “The Terror in the Vale,” his second tale of The Blue Pilgrim, following “That of the Pit.” […]