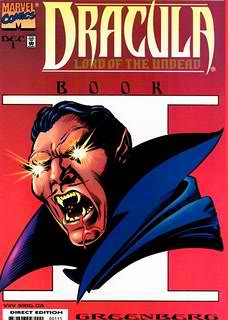 Marvel Comics quickly responded to the news that the creative team behind the legendary Tomb of Dracula series had moved over to Dark Horse to relaunch the property as Curse of Dracula. Marvel put together their own creative team to try to give fans of the original series what they wanted. Glenn Greenberg wrote the script for the three-part Dracula, Lord of the Undead limited series and Pat Olliffe provided artwork that recalled Gene Colan’s work. Colan’s original inker, Tom Palmer, was back on board as well and his contributions cannot be underestimated (and were very much lacking in the Dark Horse series).

The story opens in contemporary Transylvania, where Dracula still terrorizes the locals. The scene quickly shifts to London, where we meet Dr. Charles Seward, great grandson of Dr. John Seward, who fought alongside Abraham Van Helsing to combat Dracula in the late 19th Century. Young Seward is a research scientist whose marriage is falling apart due to his obsessive devotion to his work.

Seward’s mysterious and sinister employer has hired him to develop a cure for vampirism. To this end, his employer has recently ransacked Castle Dracula and successfully captured a vampire to serve as a guinea pig. Seward’s serum makes blood indigestible for vampires, dooming them to starvation, but it also unleashes a highly contagious blood disease that threatens to wipe out the human race. The action moves quickly. Greenberg’s story seems quite uncomplicated compared with Marv Wolfman’s highly complex plotting for the two 1990s Dracula limited series he scripted. Greenberg makes good use of flashbacks and references to earlier issues of Tomb of Dracula.

Dracula learns his stolen belongings are being sold at the Laemmle auction house (an in-joke reference to the studio executive who initiated the Universal Horror cycle of the 1930s). He successfully retrieves them and learns they were put up for auction by a man named Anton Florescu (an in-joke reference to Dracula historian Radu Florescu). Florescu shoots Dracula with a crossbow as he exits the auction house, but when the vampire captures him, he commits suicide before revealing the name of his employer. Dracula soon learns the crossbow has infected him with the virus. The vampire finds he is dying just as the virus epidemic begins spreading throughout the city. Dracula accidentally stumbles upon Charles Seward and demands the scientist take him to his employer. 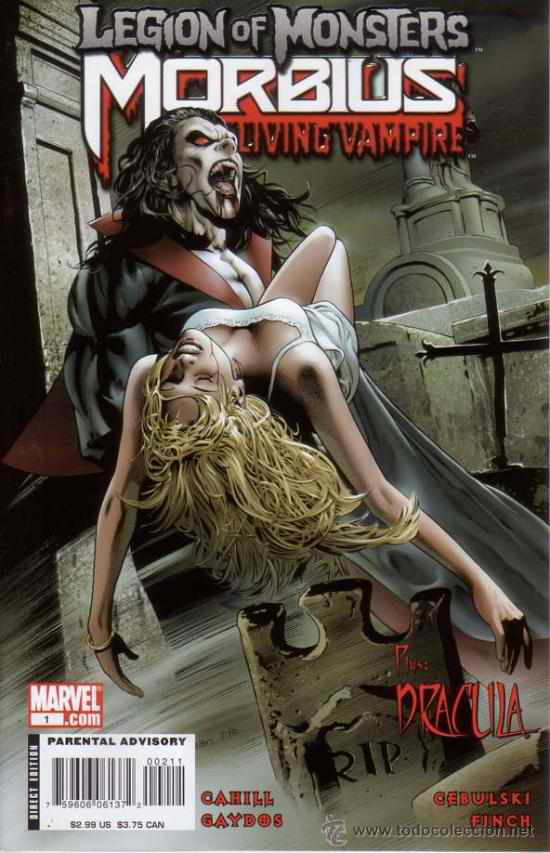 The conclusion comes rapidly, with the one surprise being the revelation that the mastermind behind the plague that could destroy all life on Earth, while eradicating vampires, is Dracula’s vengeful daughter, Lilith. Seward is killed by Lilith in an abrupt and unsatisfying death sequence for the character. Dracula and Lilith fight savagely, but it ends in a stalemate as always.

The vampire lord manages to follow Seward’s notes and produces a cure for the plague, insuring humans and vampires continue to co-exist. It’s a noble attempt and certainly closer to the feel of the original series than the latterday Blade solo series, but at no point do the story or art reach the level of Wolfman and Colan.

A decade later, Marvel tried again to revive the series proper with the Legion of Monsters one-shot. Writer C. B. Cebulski and artist David Finch contribute another Dracula-Lilith confrontation. The artwork is impressive, but the story is extremely slight (as back-up features tend to be). Dracula arrives seeking a truce with his daughter. He explains the vampires who once served him have been divided by sectarianism into five separate vampire clans. All five clans still pledge allegiance to Dracula, but their devotion is crumbling and the vampire lord would prefer to consolidate the undead under a single rule once more.

Lilith appears at the gathering of clan leaders and finds it was a trap instigated by her father, as Lilith has been condemned to death. She savagely slaughters all five vampire clansmen before it is revealed her father’s plot has worked perfectly. By using Lilith as the instrument of destruction, he has broken apart all five clans, while turning all of the undead against his daughter. Such action is in character for the series, but this is essentially a brief act with only two short scenes. However, it represents the last true portrayal of Dracula by Marvel Comics that does not attempt to reinvent the character for modern readers. Sadly, both efforts underscore the difficulty in anyone matching Wolfman and Colan. Their contribution was unique and peerless. Gratefully, their work lives on forty years later and is still appreciated by new readers each year.

[…] of Dracula out there (just in the last two weeks William Patrick Maynard covered of Marvel’s Dracula, Lord of the Undead, James Maliszewski examined Bela Lugosi’s turn as Count Dracula in the 1931 Universal film, and […]

Glenn Greenberg reached out to me privately to correct one bit of misinformation I perpetuated. His limited series was not hastily thrown together by Marvel as a response to Wolfman & Colan’s simultaneous Dark Horse limited series. Greenberg developed the storyline between 1994 and 1996 and the project had found an editor at Marvel in early 1997. Greenberg was highly influenced by TOMB OF DRACULA and conceived the project entirely on his own. The first issue was underway before word reached him about the rival Dark Horse limited series with the classic team of Wolfman & Colan.