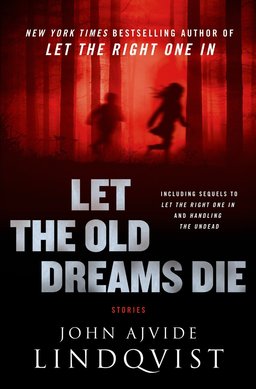 John Ajvide Lindqvist may be the breakout horror writer of the last decade.

That’s not what I might have predicted, given his bio. Lindqvist was a street magician and stand-up comic in Sweden when his first novel appeared. Set in his home town of Blackeberg, a suburb of Stockholm, Let the Right One In (2004) has been filmed twice, once in Swedish and once in English, and both versions have brought him hosts of new fans. His second novel, Handling the Undead (2005), featured a horde of zombies shambling towards Stockholm; Harbour arrived in 2008, followed by Little Star in 2010.

Of course, being prolific is no proof of popularity. No, the real evidence that he’s become a mainstream horror phenomenon is more obvious: he is relentless compared to Stephen King. Of the eight blurbs reprinted on the back of his latest, the short story collection, Let the Old Dreams Die, more than half invoke King: “Reminiscent of Stephen King at his best” (The Independent). “Deserves to be as much of a household name as Stephen King” (SFX). “Sweden’s answer to Stephen King” (Daily Mirror). Makes me wonder if Stephen King will pick the book up in Barnes and Noble and think to himself, “Hey, this guy sounds pretty good.”

Let the Old Dreams Die contains a dozen short stories and novellas, including sequels to both Let the Right One Did and Handling the Undead.

Because of the two superb films made of John Ajvide Lindqvist’s vampire masterpiece Let the Right One In, millions of people around the world know the story of Oskar and Eli and of their final escape from Blackeberg at the end of the novel. Now at last, in “Let the Old Dreams Die,” the title story in this absolutely stunning collection, we get a glimpse of what happened next to the pair…

“Let the Old Dreams Die” is not the only stunner in this collection. In “Final Processing,” Lindqvist also reveals the next chapter in the lives of the characters he created in Handling the Undead. “Equinox” is a story of a woman who takes care of her neighbor’s house while they are away and readers will never forget what she finds in the house. Every story meets the very high standard of excellence and fright factor that Lindqvist fans have come to expect.

The Swedish version of his first book was excellent. The American version was good too (and Chloë Grace Moretz is undoubtedly one of the best actresses of her generation, second only perhaps to Jennifer Lawrence–the latter’s performance in Winter’s Bone, one of my favorite movies of the last five years, is simply amazing), but I preferred the more subtle foreign version.

Can’t wait to read this compilation–I didn’t even know he was writing short stories–but it’ll probably have to wait until I’m “unfurloughed.” (I could always get an income eBaying my complete collections of F&SF, Analog, Galaxy, and Asimov’s. 😉 )

I liked both the Swedish and American versions (though I think the Swedish one was ultimately a little better). I haven’t read the book, but the movies (both versions) end up being more like love stories than horror. Again, I liked the movies; but they were not what I was expecting (which can be a good thing).

I’m curious to read this collection.

> The Swedish version of his first book was excellent. The American version was good too

I haven’t seen LET ME IN, the American version, but I was a big fan of the Swedish movie.

I’ve only seen her in KICK ASS… but based on that alone, I’m inclined to agree with you.

> second only perhaps to Jennifer Lawrence – the latter’s performance in Winter’s Bone, one of my favorite
> movies of the last five years, is simply amazing

I’ll second that. WINTER’S BONE is a chilling film, filled with a gradually-dawning horror that this young girl is searching for a father she almost certainly knows is dead, and Jennifer Lawrence’s performance was superb.

> it’ll probably have to wait until I’m “unfurloughed.” (I could always get an income eBaying my complete collections of F&SF, Analog, Galaxy, and Asimov’s.)

Wow! That’s quite a collection, and a lot of great reading.

It’s funny… I had a friend in the late 70s who bragged about his “complete collection” of OMNI and ASIMOV’S magazines. Both were barely 3 years old at that point, so it wasn’t much of an accomplishment!

I remember thinking an ASIMOV’S collection couldn’t compare to F&SF or Galaxy, ancient and venerable pubs which had both been published for over 25 years by that time, and whose origins extended far back into the deep mists of time.

But I had to move part of my Asimov’s collection a few months ago, and I finally realized that Asimov’s may still be the baby of the bunch… but it’s been continuously published for nearly 40 years.

So I guess a complete Asimov’s collection would be a significant accomplishment after all. I don’t know if my friend kept it up, but I’m glad you did.

> I liked both the Swedish and American versions (though I think the Swedish one was ultimately a little better)…
> both versions end up being more like love stories than horror.

Agreed (for the one version I saw). Creepy, disturbing, horrifying love stories… but still, love stories.

I’m not averse to a good love story (of sorts). For instance, I think Pride and Prejudice is not read by enough guys. It’s incredibly funny as well as being a good love tale. I just didn’t go into Let the Right One In with those expectations. I was pleasantly surprised.

Still . . . at the end of the day I like straight-up, creepy horror.

Familiar with Absentia or Lake Mungo? Both are recent small indie films; but both are excellent at creating a creepy effect–best two horror films I’ve seen in awhile.

As far as Hollywood flics, I found The Conjuringto be quite good as well.