Had he not died of cancer in 2009, today would have been the 66th birthday of David L. “Dave” Arneson, co-creator of Dungeons & Dragons and one of the most under-appreciated creators of the past century.That may sound like an exaggeration, but I mean it most sincerely. Through the medium of tabletop roleplaying games, a concept that owes as much to his imagination and ingenuity as anyone’s, Arneson has profoundly affected millions of lives, including my own. If you’ve ever played in any kind of game that featured a “dungeon” or had a character with “hit points” or who earned “experience points,” you can thank Dave Arneson, who pioneered all these game mechanics in his Blackmoor campaign in Minneapolis during the early 1970s. It was Arneson who made the conceptual leap from fighting battles on a sand table with miniature metal figures to playing individual characters who explored monster-filled labyrinths in search of “more and bigger loot,” as Volume 3 of the 1974 edition of Dungeons & Dragons memorably puts it.

Sadly, Arneson is far from a household name. When Gary Gygax, D&D‘s other co-creator, died in 2008, it was big news. Newspapers, magazines, and websites across the world, including such prestigious ones as The New York Times, The Economist, and the BBC (to cite but a few) all included high-profile obituaries of the man whom they called “the Father of Roleplaying Games.” More than that, these obituaries often served as springboards for wide-ranging reflections about RPGs and their place in shaping contemporary popular culture. The video game industry in particular hailed Gygax as its intellectual forefather, citing the seminal role Dungeons & Dragons played in shaping it – and rightly so, I should add. There’s no question that Gary Gygax played an incalculably huge role in the popularization of the roleplaying game, a new form of entertainment whose ideas took the world by storm.

Arneson’s death, just a little over a year later, didn’t receive quite the same kind of coverage. There were still obituaries in The New York Times and on the BBC, of course, but they were shorter, more muted affairs, perhaps in part because Gygax’s death was still fresh in people’s minds and there didn’t seem to be much more to say about Arneson that hadn’t already been said about Gygax.

Furthermore, Gygax was in life a relentless promoter of Dungeons & Dragons, becoming its public face and spokesman for a generation of gamers in much the same way that Stan Lee was for Marvel Comics. In contrast, Arneson ceased having any official connection to D&D after 1976, when he left TSR Hobbies to pursue his own projects. He also seemed a much more shy, self-effacing individual, who was uncomfortable in the limelight. 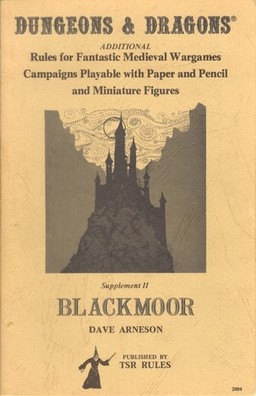 When I rolled my first polyhedral dice in late 1979, Arneson’s name was largely unknown to me. He was mentioned in the foreword to my beloved “Blue Book” edition of D&D and he was thanked in the preface to the Players Handbook, but that was about it. I didn’t see a copy of Supplement II to the original edition of Dungeons & Dragons until quite a few years later and, when I finally did see Blackmoor, it didn’t make much of an impression on me beyond my thinking that the sample adventure it included, “The Temple of the Frog,” was weird, because it included science fiction elements, like powered armor and aliens from another world.

I also recall seeing an advertisement for a convention in an issue of Dragon that proudly proclaimed that its guest of honor would be none other than “Dave Arneson, co-creator of Dungeons & Dragons,” which, at the time – this was probably 1982 or 1983 – struck me as odd. I reasoned that, if D&D hadn’t burst, fully-formed, from the head of Gary Gygax alone as my youthful mind imagined, why hadn’t I heard of this other guy?

The reason is a sad one that goes beyond Arneson’s retiring personality. As co-creator, Arneson was due a portion of the royalties coming from the sale of every copy of Dungeons & Dragons, which proved to be a considerable sum, given how faddishly popular the game had become by the late 1970’s. When Gygax began working on an expansion and clarification of D&D under the name of Advanced Dungeons & Dragons, TSR Hobbies took the position that this was an entirely new game and Arneson was thus not entitled to any royalties from it. In hindsight, it’s a rather ludicrous notion, but one has to remember that, at that point in time, D&D was generating more income for TSR every yea,r with no end in sight. Having to turn over even a small portion of that income to Arneson might well have been a bitter pill to swallow, particularly in a hobby industry where prior successful games sold hundreds of copies, not hundreds of thousands.

Arneson countered with several lawsuits and ultimately prevailed, but, during the period when I first began roleplaying, Arneson’s name seemed to have been pointedly not mentioned, as if to bolster TSR’s ongoing legal case. Even after a settlement was reached and Arneson’s place as the game’s “co-creator” was formally established, TSR increasingly treated its AD&D line (in which Arneson had no direct involvement) as if it were the “real” version of the game, leading some (my friends and I, for example) to view the D&D line as being strictly for kids. The irony is that more people probably discovered roleplaying through the pages of those “kiddie” editions of D&D that I disdained than through Gygax’s weighty AD&D volumes.

Even more ironic, I think, is that, in the foreword to Supplement II, Gary Gygax wrote the following:

Dave Arneson… Is there really such a creature? Yes, Gentle Readers, there is, and shudder when the name is spoken. Although he is a man of many talents who has authored many historic rules sets and games (which TSR will be publishing periodically), Dave is also the innovator of the “dungeon adventure” concept, creator of ghastly monsters, and inscrutable dungeonmaster par excellence. He devises complex combat systems, inexplicable dungeon and wilderness areas, and traps of the most subtle fiendishness. Herein you will get a taste of these, but he never reveals all. This writer always looks forward with great anticipation to an adventure in the “BLACKMOOR” campaign, for despite the fact that I co-authored the original work with Dave and have spent hundreds of hours creating and playing DUNGEONS & DRAGONS, it is always a fresh challenge to enter his “world”. I can not recommend him more highly than simply saying that I would rather play in his campaign than any other – that other dungeonmasters who emulate Dave Arneson will indeed improve their games.

That’s about as good a panegyric of the man as any I can imagine! Happy Birthday, Dave! You are missed.

Your younger self’s view, and experience, of DnD and ADnD was similar to mine. I first started role-playing with the box sets in 6th grade; but I wanted desperately to move on to ADnD pretty early on because I also thought of it as the “big boys” DnD set.

One thing that may have contributed to that was that there were two box sets the “basic set” and the “expert set.” It seemed a natural progression to go from the expert set of DnD to Advanced! DnD.

Great post! Thanks for giving this lesser known creator some limelight.

I remember that supplement! Sadly, my copy is now lost to the ages.

My first encounter with Blackmoor was as a name on the World of Greyhawk map (and a suitably ominous-sounding paragraph in the gazetteer). They did bring it back into the fold in the mid-late 80’s — there were, I think, four DA modules that put Blackmoor into Mystara (the basic/expert campaign setting), although thousands of years in the past.

And I know I saw a D20 revival although I never quite got around to picking it up.

Black Gate » Blog Archive » The Cleric and the Crucifix

[…] and silver crosses (as well as holy water) in addition to the expected arms and armor. Furthermore, Dave Arneson‘s Blackmoor campaign – Ground Zero for the RPG explosion – owes its origin, as he […]