Storytelling, great storytelling, exists on two levels. It tells us the particular story, of course, but it also tells us the Big Ones. It asks the great questions: about ourselves, our relationships to each other and the universe, about life and death and love and fate. The Odyssey, being great storytelling in addition to beautiful poetry, grapples with the biggest of these: what is this humanity of ours? What does it mean? Odysseus wanders, definitely lost, and in the course of finding home also stumbles through illustrations of what a man is.

His adventures with the Cyclops looks at the difference between a ‘civilized’ man and a monster. His encounter with the Lotus-eaters teaches that memory is essential to identity. And of course, no journey is properly heroic without a road trip to the land of the dead.

Back at Circe’s place, she had told our hero that he had to get directions home from Tiresias.

Which raises the question: why? She’s a goddess who can turn men into animals and, in fact, give him directions to the land of the bleedin’ dead, so why can’t she tell him herself?

Maybe he wouldn’t take directions from a woman.

Maybe she didn’t know the way to Ithaca. Humbling for the island’s king: where ya from? Ithaca? Never heard of it…

Or maybe Odysseus’s problem was less a lack of GPS than the fact that he had royally pissed off the god of the seas. As a man with a fascinating relationship with the gods (more on that another time…), Tiresias was particularly qualified to give the king advice on how to placate Poseidon.

Since Tiresias was dead, this poses quite the trick. But Odysseus wants to get home so badly that he will run the risk.

(He wanted to get home so badly he shacked up with Circe for a year, but let’s just handwave it all. Homer does. It’s important to remember at this point that this entire story is being told, not by Homer as a narrator, but by Odysseus in order to impress the Phaeacians. Later, Homer tells us that Odysseus also tells the story to Penelope, but we don’t ‘hear’ that version. I’d love to hear the story he told his wife…)

This is to the best of my knowledge the earliest written record of the journey of a human hero to the Underworld. It’s certainly the best known of ancient works. But for all that, it’s a bit disappointing. For one thing, you can sail straight into the Underworld if you know the way. It seems to be up around the Black Sea, so it doesn’t quite qualify as an Underworld, just… the island where dead people live. Unlive. Dwell.

The Island where Dead People Dwell.

For another, it’s lacking a lot of the features we’ve come to expect from such a locale. We don’t see Hades or his wife, Persephone, although Odysseus prays to them when he arrives. There’s no Cerberus, no punishment of the evil (that we see; maybe they get a different island), and no particular reward for the good.

But it’s still the Land of the Dead. The first thing we learn is that the dead do not speak, not until they drink blood. So Odysseus makes a sacrifice (black ram, what else?), pours out the blood into a trench on the ground, and has to hold off hungry shades (Homer’s term for the spirits of the dead) with a sword.

After he’s gotten his directions, Odysseus decides to let some of the other shades come and talk. Because it’s the Land of the Dead. Who wouldn’t? He sees several notable heroines, Agamemnon (who tells him to watch out for wives with axes), and a few old friends. But most famously, he talks to Achilles. 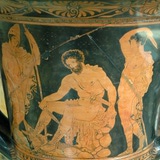 This is where it gets a bit deep. In the Iliad, Achilles tells us that he was given a choice as a boy. He could live a long, happy life, but die unremarked and be forgotten. Or he could live a short, difficult life and be remembered for centuries to come.

We know what he chose, since we have the Iliad. But here, among the shades, Achilles tells Odysseus he made the wrong choice. Better to live a long life as a slave to a man who doesn’t own his own house, Achilles says, than to be even the king of the dead.

If you’ve ever taken a world lit class and studied the Iliad, you’ve probably heard that glory was the greatest value to the Greek warriors. So what Achilles says is earth shattering. If glory isn’t worth living for, then what is?

One answer, the answer I like, is the theme of the entire epic: home. The only thing that brings Achilles joy is news of his son. Odysseus’s entire mission now is to return to his wife and child, and that reunion forms the ‘happy ending’ (such as it is) of The Odyssey. Agamemnon won the war only to be murdered on his return, and Achilles chose glory over any return at all. Only Odysseus will know any kind of peace and even that may be transient.

That is the other lesson of this trip to see the shades: every action has its consequences. The rape of Troy will lead to continued heartbreak and devastation for its authors. Odysseus will get home, but he will have to leave again in order to pacify Poseidon, whose son he blinded. When a culture’s currency is honor, glory, and vengeance, there can be no rest and no peace.

Fun Fact: Odysseus’s journey to the Land of the Dead is also called the Nekyia (Nek-wee-ah). Whip that out at your next cocktail party, make friends, and influence people.

Speaking of cocktail parties, who would you summon up if you could have a drink with one of the dead?

Your image captions are the best captions.

I’d want to conjure Hilda Doolittle, who published under her initials as H.D. (If you were trying to establish your literary career as a woman in 1913 and you had a name like Hilda Doolittle, you also would consider publishing under your initials.) If she ended up at some afterlife other than the Greek one, she would still be familiar enough with the customs there to know what to do when offered a black ram, so that’s helpful. I wrote my dissertation about her, and after ten years in academia, I would like to commune with the one writer I liked enough that I almost forgot to write my own books so I could write about hers.

I actually studied H.D. a bit in High School. We had a class on Lost Gen Lit.

Myself, I’d probably end up flipping a coin to decide which of a handful of dead Romans I’d want to talk to. It’s down to Clodia, Caesar, or Ovid. Or all three. That would be a hangover of the ages.

Oh, man, I would want to ask Ovid what he witnessed that got him banished. Just the answer to that one question would be enough for me.

Or what he did! He famously said that he was kicked out for “carmen et error”, a poem and a mistake. People think maybe he saw something because of Actaeon? But it may have been a good bit more than that. ANd we will never know, and it makes me CRAZY!

Also, the fact that we do not have his “Medea”.