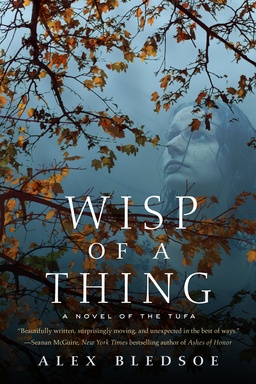 I caught Alex Bledsoe reading from Wisp of a Thing at a small Chicago convention earlier this year, and was immediately riveted. Seriously, if you get the chance, ask Alex to come to your house and read the first chapter. Or just stop him when you run into him at the mall, and impose on him to read a few pages. You won’t regret it (though you may have to buy him lunch).

The first volume in the series, The Hum and the Shiver — which gets my vote for best book title of 2011 — was named one of the Best Fiction Books of 2011 by Kirkus Reviews. The second, Wisp of a Thing, takes us back to the isolated hollows of the Smoky Mountains for another spooky tale of music and very old magic.

Touched by a very public tragedy, musician Rob Quillen comes to Cloud County, Tennessee, in search of a song that might ease his aching heart. All he knows of the mysterious and reclusive Tufa is what he has read on the internet: they are an enigmatic clan of swarthy, black-haired mountain people whose historical roots are lost in myth and controversy. Some people say that when the first white settlers came to the Appalachians centuries ago, they found the Tufa already there. Others hint that Tufa blood brings special gifts.

Rob finds both music and mystery in the mountains. Close-lipped locals guard their secrets, even as Rob gets caught up in a subtle power struggle he can’t begin to comprehend. A vacationing wife goes missing, raising suspicions of foul play, and a strange feral girl runs wild in the woods, howling in the night like a lost spirit.

Change is coming to Cloud County, and only the night wind knows what part Rob will play when the last leaf falls from the Widow’s Tree… and a timeless curse must be broken at last.

Alex’s article on the Appalachian fantasy of Manly Wade Wellman, “How I Discovered Silver John,” appeared at Tor.com back in March. He is the author of the Eddie LaCrosse novels The Sword-Edged Blonde, Dark Jenny, Wake of the Bloody Angel and Burn Me Deadly.

I enjoyed the heck out of this book, John, and even included it as one of my two-book columns for SF Site a couple of months ago.

There’s some rough sexual language, so parents be warned if you have youngsters who may not be ready for such explicit language.

That’s a nice review, Dave. Thanks for the link!

John,
Thanks for reviewing these books. I started with THE HUM AND THE SHIVER; enjoyed it very much so I read WISP OF A THING next. Another really good read so like most readers do when they find an author they enjoy–they look for more books. I just finished THE SWORD EDGED BLONDE. The first two books were great reads but I have to confess that I’ve fallen pretty hard for Eddie La Cross. Whatta great character. The book’s pacing was perfect and the plot left me reluctant to see the end of the book. I’ve ordered Alex’s next three books featuring Eddie.
Thanks again, John.
Barbara