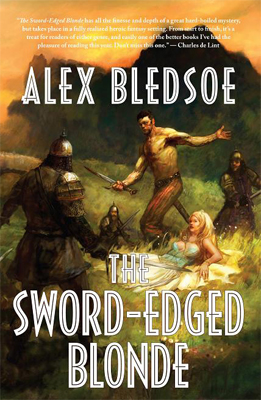 I never remember where I learn half of the stuff I find out about on the Internet, but I’m glad I was paying enough attention to make note of The Sword-Edged Blonde. It’s billed as a fantasy tale written in a style reminiscent of Dashiell Hammett and Raymond Chandler.

The story’s told by Eddie LaCrosse, a former soldier, mercenary and general “knock around” guy running an investigating service. He’s contacted by a client to find a missing princess, which proves to be the springboard for a much more desperate tale involving murder, conspiracy, and revenge. LaCrosse enters the service of an old friend, King Philip of Arentia, to clear the name of his wife, Queen Rhiannon, who has been convicted of killing and eating her infant son in an unholy ritual sacrifice.

We follow LaCrosse from royal palaces to back-alley gambling dens as he uses every skill at his disposal to clear the queen. A complex pattern of flashbacks reveals the hand of fate; old acquaintances from the past become players in the intrigues of the present. Fortunately, the flashbacks don’t confuse the reader and actually showcase some of the best action sequences in the novel. Such is the case when LaCrosse first comes across Cathy Dumont, a courier beset by roadside bandits. After dealing with the robbers, LaCrosse and Cathy share the road, and a mutual respect and attraction. Cathy is delivering a package that will haunt Eddie for years to come. Bledsoe manages to merge the past and the present convincingly, as long as you accept the premise that magic works, gods walk the earth, and curses last for ages.

The Sword-Edged Blonde followed much of the style one expects from a gritty detective novel. LaCrosse is a likeable guy. He’s been around the block a few times, but is still human enough to get sucker-punched from time to time. It took me awhile to adjust to the characters referring to each other as Eddie, Phil, or Janet, mostly because I’m more familiar with the formal or invented names that are more often used in fantasy tales. But I settled in and adjusted readily enough.

I’ve seen The Sword-Edged Blonde described as both high fantasy and sword-and-sorcery. High fantasy conjures images of wizards, elves, dragons, and dark lords. Sword-and-sorcery brings to mind ancient ruins, grim barbarians, and spider haunted temples. The Sword-edged Blonde doesn’t have much of either. There is magic, and there are bloody fights worthy of the best sword-and-sorcery tale. But The Sword-Edged Blonde is more like a grim and gritty fairy tale for adults clothed skillfully in a trench coat and a fedora and seasoned with elements of sacrifice, romance, intrigue, and redemption. It was a good read.

One thought on “Fiction Review: The Sword-Edged Blonde by Alex Bledsoe”