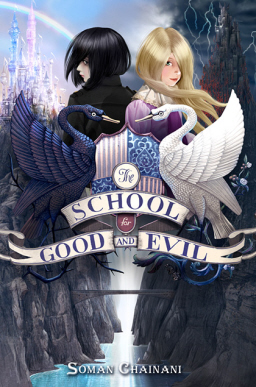 The School for Good and Evil is a major summer release from HarperCollins, with a national marketing campaign and lot of pre-release buzz, and it’s already getting a lot of attention.

We know what to do with young adult books getting a lot of attention here at Black Gate – we give them to Tabitha, the thirteen year-old reviewer who covered The House of Dead Maids and All the Lovely Bad Ones for us, among others. We’re glad to have her join us again, even though she makes us feel old and out of touch.

Black Gate: Tabitha, welcome back to the Black Gate offices!

Tabitha: Thanks, I guess.

Before we get started, why don’t you tell us a little about yourself.

Didn’t we do that last time?

Yes but that was like a hundred years ago. All the people who read your last reviews probably got old and died.

Wow. Okay, in that case, I turn 114 this year. I’m going to high school next year. On the introvert scale, I’m beyond “vampire.”

“Beyond vampire.” What does that mean? Explain it for old people.

I scream in agony whenever I set foot outside my house.

Good thing we have free review copies sent to us, then. Speaking of which, what did you think of The School for Good and Evil?

Not what I expected. At all. I thought it was one of those girlie Barbie books. 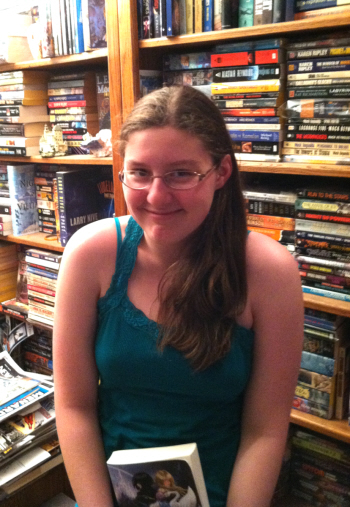 Okay. So what is it then?

It’s surprisingly twisted. There are a lot of dark themes. Which is good.

The protagonists commit murder. Intentional murder, not the accidental kind.

You need to warn me if this is some kind of big spoiler, because if it is the publisher will stop sending us books.

So, is that a spoiler?

When does it happen?

Pretty early. It’s not really part of the main plot.

Glad to hear murder is a sub-plot in YA books these days. Let’s not mention this to your mother, because she’s going to kill me. Why do they commit this murder, anyway?

That could be considered a spoiler. I suppose you could say… one of the main characters has vanity issues.

Tell me about her.

There are two main girls, who are stereotypical good and evil. One lives in a cemetery and kills small animals, the other one believes everything is about beauty and how you look.

Okay… because I’m old, you’re gonna have to clarify for me which one is good, and which is evil.

The beautiful one is considered good. The one who lives in a cemetery is less pretty, and she’s considered evil.

I see. And your mother’s right – I can see you are ready for high school.

The two girls live in a village where every four years two children are kidnapped, like clockwork, and taken to the School for Good and Evil. The kindest child and the cruelest one are each selected and sent to their respective schools. Ironically, rather than the rivals they should be, this year the two are best friends.

Uh-huh. On the same campus. Kinda like two different majors. In these schools they’re trained to be heroes or villains, in the fairy tale sense.

What do you mean, in the fairy tale sense?

Former students include Hansel & Gretel, Rapunzel, the wicked witch from Snow White, and the Sheriff of Nottingham.

Does that mean Robin Hood went to this school?

Depends on which school you go to. And your taste. 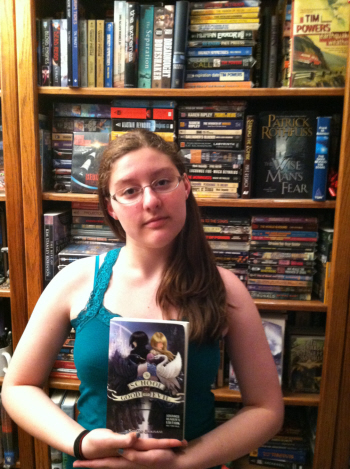 I meant the book sounds cool.

Oh. Yeah. It’s very good. It’s not at all what I was expecting it to be like. The characters are surprisingly adult, yet have their childlike moments. There are very, very dark moments that I wouldn’t expect in a book about fairy tales, but somehow the author makes them fit perfectly.

I’ve heard the book described as “wickedly hilarious.” Is it funny?

I can see why they would say that, yeah. The characters’ reactions are often times comical, to say the least.

Who was your favorite character?

I’d have to say Agatha, the stereotypical witch. She’s the one who lives in the cemetery. I like her because even though her whole world is turned upside down, she won’t abandon her friend. She’s very intelligent, and knows how to get things done.

You read the book twice. In my experience, that usually means you enjoyed it.

Yeah – it was a pretty good book!

Anything you noticed the second time through that you didn’t notice the first?

There are a lot of subtle hints – I won’t say to what. The way the author puts the events together is very well done. Everything builds up. It’s very subtle, but if you know what’s coming then it’s genius.

Are there more twists then?

Hmmm. I liked the message, but the very, very end…. Hmmm. It seemed like there should have been more. Like this isn’t the end of the story. We’re not done yet, and that was really frustrating.

Do you hope there are more?

Yes! Because I want to find out what the real ending is.

So I guess I don’t need to ask I if you’d read more books by the same author?

I would say yes. If the characters and the plot are as well constructed as this, then absolutely I would.

Are Sophie and Agatha really done?

Anything you’d like to tell people who are considering reading The School for Good and Evil?

If you’re very observant, and love to give yourself a challenge, then I’d pick up this book. There are so many subtle hints… I only caught a handful the first time. And probably only a handful the second time! I challenge you to figure out this fairly tale before it ends.

This is the perfect example of “Don’t judge a book by its cover.” It’s not a book for children. It’s not even really a book for people who like happily-ever-after. The fairy tales we know are nothing like this one.