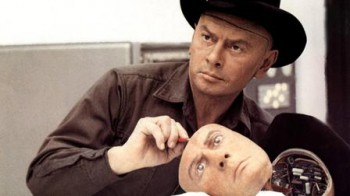 How any adult, in this day and age, can approach Westworld (1973) in anything remotely close to the appropriate frame of mind is beyond me. To further complicate an open, honest viewing, the film could not possibly telegraph its intentions more bluntly. Will the tourists attending Western World, Roman World, and Medieval World have the time of their vacationing lives? Well, yes –– but in short order, they will be done in by their out-of-control hosts, robots one and all, semi-sentient machines understandably tired of living out their days getting gunned down by their rich and warm-blooded doppelgangers.

Pardon me if in the course of this review I don’t concern myself with spoilers.  If the DVD’s cover doesn’t give the game away, the first two minutes of the film surely will.

Leaving, then… what? A cautionary tale, in which we fragile mortals should learn to stop messing around with simulacrums? Or is it an adventure in which the stakes are high and the six-guns are fast?

The fact is, it’s a mess. We know from the get-go that somebody’s going to get hurt, so the only

questions remaining are, much like many a summer-camp horror flick, When and How? Unfortunately, When and How are tricky, even limp, dramatic cards. To further murk the muddy waters, there are really only two stars (Richard Benjamin and James Brolin); with Mr. Brolin relegated to sidekick status, we even know which one will die.

Other ailments abound. The soundtrack grates. It’s meant to, yes, but as soon as it veers from frontier-style, tack-piano homage, it becomes, well, dated. Like being stuck inside a garbage can while listening to the worst outtakes of Tangerine Dream. 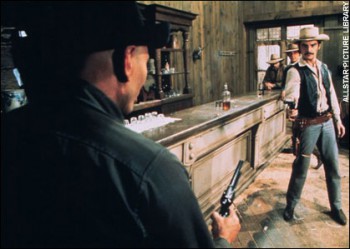 The cinematography is flat as a pancake. Shadows, except in the final confrontation, are all but banished from this film. It’s as if all the great film noir cinematographers went on strike all at once, replaced by refugees from live television.

Yul Brynner, however, is predictably marvelous. His waddling walk proves to be the perfect send-up of the archetypal gunfighter, with saddle sores and arthritis reconfigured as pistons and gears. He strides around, thumbs in his belt-loops, looking like the world’s most fearsome black-clad duck. Sounds silly, yes? It isn’t; the effect works. Brynner alone, of all the Westworld actors, comprehends the off-kilter gravitas necessary to make this effort fly.

As another small jot on the plus side of the ledger, it must be pointed out that Majel Barrett 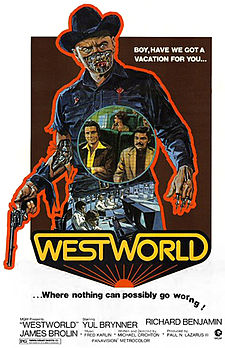 makes a cameo appearance.  Having wowed the galaxy in Star Trek, she’s back as the sophisticated Madam of the Westworld bordello.  She has very little to do –– no surprise: any Nurse Chapel sex scenes would seem dull without Spock’s pointy-eared resistance –– but it’s nice to see a familiar face in amongst the robot horde.

All in all, screenwriter and director Michael Crichton should have stuck to books. Westworld is fun, yes, but its stock in trade looks kitschier and less sophisticated by the day, and I’m not speaking here only of the necessarily faded special effects. Of course we should be wary of humanity’s reliance on machines! Every science fiction writer since Jules Verne has sounded that same claxon.

How do I know? Simple. I checked it on my iPhone.

I suppose Westworld’s place in sci-fi filmdom these days is secured more by its lineage than by any inherent quality, influencing as it did later films like The Terminator and Jurassic Park.

Personally, I have fond memories of it, but that could partially be nostalgia–I first saw it at a drive-in when I was a boy. I confess I haven’t seen it in years, although I did pick up the DVD with the intent of watching it again. Your review makes me worry that I’ll find it hasn’t aged well…

It’s not a bad idea in principle, but cowboy robots are so … passé. I know! Let’s sex it up a bit — instead of cowboy robots, how about, oh, I don’t know, genetically-reconstructed dinosaurs?

Nick – I actually feel guilty for not liking this flick better.

Joe – Good thinking! How about we put the dinosaurs in Costa Rica, where no one will notice?