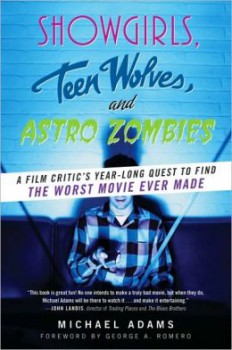 A non-fiction fad of the past decade has been for an author to do something outrageous for a year and then write a book detailing the experience. If you know someone who inexplicably stopped bathing for months, or who stopped shaving or cutting his hair, or who started eating all her food raw and communicating only with gestures and grunts, you may know someone who has embarked on living like a person in the Middle Ages, or like a caveman — with an eye, of course, to chronicling it all and cranking out a bestseller. Do them a favor and tell them it’s probably already been done. Writers like A.J. Jacobs (The Year of Living Biblically) have cornered the market on myself-as-the-story immersive or “stunt” journalism.

I’ve read a number of these “stunt books” by various authors; frequently they are entertaining page-turners, and they do offer interesting perspectives and provide some bizarre, oftentimes fascinating trivia. But I have also grown oversensitive to the tendency of some such writers to indulge in a bit of melodramatic self-pity: “For 200 days now I haven’t been able to [fill in the blank], and my wife is totally exasperated!” Yes, these folks put themselves through some crazy regimens of self-denial and eccentric behavior, but journalists have gone through far worse to get a story: try reporting from a war zone, for instance.

For his “stunt book,” Australian film critic Michael Adams undertook a task that puts him squarely on the radar of this blog: he decided to watch at least one bad film every day for a year in a quest to find the Worst. Film. Ever Made. Ever. As somewhat of a connoisseur of B- and Z-grade films, I eagerly picked up this comprehensive report from a fellow cinephile: Showgirls, Teen Wolves, and Astro Zombies (2010). So here, now, is a brief review of the bad-movie viewer…

Adams used the IMDb’s bottom 100 list as a starting point, but he also tackled recommendations from movie directors he had the opportunity to interview during the course of the project. He includes snippets from some of those conversations with the likes of George Romero, John Landis, Joe Dante, and John Waters, livening up the narration with these insider voices. He even has some entertaining chats with a few of the directors whose films are contenders for worst ever made. Some are self-effacing and have a humble, realistic perspective on the notoriety of their output, while others exhibit defensive, egotistical denial — “My movies aren’t bad; the audiences are bad if they don’t appreciate my creations!”

An earmark of this style of reporting is that the author notes reactions to the ofttimes awkward and inconvenient pursuit by friends, co-workers, acquaintances, family — most especially one’s own spouse, who has to jointly endure the author’s 365-day, 24/7 commitment. Adams seems to have a sympathetic and indulgent wife, according to his own testimony. Despite their having a two-year-old daughter, she comes across as supportive and encouraging throughout his year-long project to discover the worst film ever made, which entails co-opting the television to watch one and sometimes three or more bad films every day throughout 2007. He met and surpassed his goal, and made his selection for worst ever (with quite a few runners-up).

Like others in the “self-immersive-journalism” trend, Adams interweaves his reactions to the movies themselves with a running commentary of his own life, both his burgeoning career as an on-air movie reviewer for an Australian entertainment program and his home life, recording how they are impacted by his resolution to watch hours of bad cinema each and every day. On only one or two occasions does he indulge in a bit of mercifully brief whining about it — something, as I mentioned earlier, that has become a minor pet peeve after reading so many books of this nature. Yes, the undertaking’s a real pain at times, but watch a few episodes of Mike Rowe’s Dirty Jobs and just imagine how much worse it could be: instead of plumbing the depths of cinema excrement, you could be working in real excrement — and not get a book out of it that has a foreword by your new friend George Romero (who also flew you out to Canada to be a zombie extra in his latest Dead flick) and a cover blurb from your new friend Kevin Murphy of Mystery Science Theater 3000.  Yep, could be a lot worse.

For the most part, though, Adams describes the undertaking in high spirits and with good humor — although, granted, there are just some films that test the limits of human endurance. As a sometime reviewer of B- and Z-grade cinema, I can empathize. I, too, have sat through some of these movies. Sure, there are the “so bad it’s good” cult classics like Robot Monster, Plan 9 from Outer Space, and The Giant Claw, any of which I would rather sit through again than most of Hollywood’s latest crop of rom-com pretty-star-of-the-week vehicles.  But then there are the “so bad it’s really, reeeally bad,” nuggets of toxic celluloid that can spontaneously induce nihilistic bouts of severe depression and, like some prescription drugs, should come with the warning label “Discontinue use if you have suicidal thoughts.” You know, those films where, when the credits roll, you sit there in a hazy stupor wondering if you can get a refund — not for what you spent on the DVD, but for the two hours of your life back.

What does such an undertaking do to a person? About halfway through the year, Adams writes, “I am glad I’m taking notes because my head bulges with the badness and the arcana I’ve picked up. The movies are starting to run together. But sometimes the factoids unite into thoughts like, ‘I bet vegetable-loving Poison Ivy would get on well with Dr. Bragan from The Revenge of Doctor X and Elizar Kane of Theodore Rex’”(152). And might I add to that thought: not to mention the trolls of Troll 2, who are also vegetarians and must therefore first turn their victims into plants before they can eat them. (See, Adams? I’m totally there with ya.)

When it comes to the so-bad-they’re-good classics, it is always fun to indulge with a like-minded viewer like Adams, revisiting just what makes them so jaw-droppingly, unintentionally uproarious. He also imparts his share of trivia of particular interest to a reader like me, such as the allusion to both Plan 9 and Douglas Adams in The X-Files:

In Plan 9, it’s America that picks a fight with friendly visitors and who keeps news about alien life from their own citizens. No wonder that in The X-Files Fox Mulder says he’s seen it forty-two times, which, as Douglas Adams fans know, makes it the meaning of life. David Duchovny’s Mulder claims Plan 9 lets his mind shut off so he can make otherwise impossible leaps of logic. (67)

With his level-headed perspective and wit, Adams also mines some fun from the worst of the worst — films I would prefer never to watch five minutes of, although I do enjoy reading the accounts of his brave (or foolhardy) forays into the far-flung fringes of vile movie bile. As Father Philip Lamont (Richard Burton) says in Exorcist II: The Heretic, “It was horrible…utterly horrible..and fascinating,” which makes a fitting epigraph to one of Adams’s chapters.

Beyond clever quips and wisecracks, Adams makes his fair share of insightful observations, such as this one about the bad ends so many B-movie directors and actors have met: “Ed Wood, Barbara Payton, Tom Graeff, Al Adamson, Cheryl ‘Rainbeaux’ Smith, John Reynolds from Manos, half the cast of Bloodsucking Freaks — they all expired in sad fashion. I don’t know that it means anything other than that most bad movies come out of the margins and they’re a more dangerous place to live than, say, Beverly Hills” (218). That is a thoughtful reflection, amply demonstrating that Adams’s brain hasn’t been entirely fried out by overexposure to dreck.

So, overall, I enjoyed reading this book, and I gleaned a few “so bad they’re good” movies to add to my own rental queue, like Mighty Peking Man and Death Bed: The Bed that Eats. Unlike most of the films Adams watched, I give Showgirls, Teen Wolves, and Astro Zombies 4 out of 5 stars. I had a very entertaining time between the covers.

After a year and hundreds of movies, Adams did give the crown of Worst Movie Ever Made to…[drum roll please]… 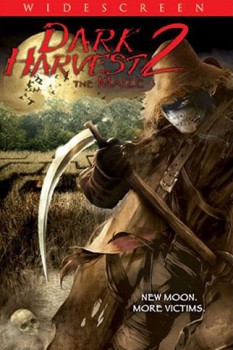 Here a few of his runners-up:

[…] Adams did for his book Showgirls, Teen Wolves, and Astro Zombies (which I reviewed for Black Gate here), that wouldn’t even empty the Netflix queue — and, like a hole dug in sand, it keeps filling […]