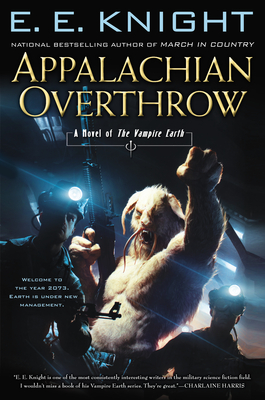 I’m a huge fan of E.E. Knight’s Vampire Earth novels. For me it started years ago, with the paperback editions of the first two books in the series, Way of the Wolf and Choice of the Cat.

If you’re new to the series, of course, things are easier. You don’t have long waits between releases, haunting bookstores for the next installment. You can even get the first three novels in a handsome omnibus edition from the Science Fiction Book Club, Enter the Wolf, as we reported right here last month.

Appalachian Overthrow, the tenth novel in E.E. Knight’s exciting series, arrived in stores last week. This volume focuses on David Valentine’s fellow freedom fighter Ahn-Kha, telling a tale of the time when he was imprisoned and forced into hard labor by the alien Kurians — and the rebellion he led against them.

Captured and sold to the Kurian–allied Maynes Conglomerate, to work as a slave in the coal mines of Appalachia, Ahn-Kha is angered and appalled by the dangerous working conditions, and the brutal treatment inflicted upon his fellow miners. When a protest against shortages is deliberately and bloodily suppressed, Ahn-Kha sets himself against the ruling Maynes family and sets out on a trail of vengeance through the Coal Country.

Finally, the people of the Coal Country are driven to the breaking point — and they now have a leader, a powerful and battle-hardened leader, determined to forge them into an army that will wage guerrilla warfare against the Maynes family and their Kurian masters — and free the Appalachians from their tyranny…

E.E. Knight’s Blue Pligrim story “The Terror in the Vale” was one of the most popular stories we’ve published as part of our Black Gate Online Fiction line. It is a relentless and chilling tale of sword and sorcery, with an ending that will stay with you long after you turn off the monitor and climb into bed. Read the complete story free here.

Thanks for the mention, John.

Yes, Jason, I was dreading this cover more than any other. But they got Ahn-Kha very close to how I imagine him.

I was wondering what you’d think about it — I thought it was pretty cool, and was hoping I wasn’t off base!

I found the cover really intriguing — and a nice departure from the stalwart men-at-arms that have patrolled the last few.