When I returned from GenCon last year, I mentioned just how excellent the Writer’s Symposium was. I’d heard about the Writer’s Symposium, but had never attended. I found it extremely well organized, well-run, and, most importantly, it seemed a fine way for those interested in writing and publishing to pick up tips from the pros.

The Gen Con Writer’s Symposium recently released the list of participating authors for 2013, and it includes some of the greatest science fiction, fantasy, and media tie-in writers working today. More than fifty talented authors and experts will participate in the panels planned for this year’s Writer’s Symposium, including Guests of Honor Mercedes Lackey and Larry Dixon. 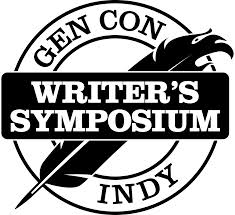 “We’re extremely excited,” said Marc Tassin, the Gen Con Literary Coordinator and the Symposium organizer. “The list of authors that have signed on to participate this year is quite incredible. This year’s Symposium is an unprecedented opportunity for both experienced and beginning writers to learn from some of the greatest writing talents out there today.”

“Having participated in numerous writing seminars both in and out of genre over the years, I am stunned by both the caliber of the participants and sheer size of the Gencon writers symposium,” said Lou Anders, Hugo award-winning Editorial Director of Pyr books. “I’m not sure anyone quite realizes that this symposium has quietly built itself into one of the largest and most impressive writing symposiums in the field. Anyone with an interest in writing science fiction and fantasy literature, whether media tie-in or not, should definitely have this on their radar.”
A full event list for the Symposium is scheduled for release later this month. Tickets to Gen Con are available at www.gencon.com.
For more information, please contact Marc Tassin ( contact@genconwriters.com ).

About the Writer’s Symposium: The Gen Con Writer’s Symposium is one of the largest writing conferences in the world. Established in 1995, it offers more than 110 hours of events for both new and experienced authors. The Symposium features more than fifty authors and has served as a springboard for the careers of many accomplished writers. The Symposium will be held August 15th to 18th, 2013, in Indianapolis, Indiana as part of the annual Gen Con gaming convention. For more information on the Symposium, visit www.genconwriters.com.

About Gen Con: Gen Con, LLC produces the largest consumer hobby, fantasy, sci-fi and adventure game convention in North America. It was acquired in 2002 by former CEO and founder of Wizards of the Coast Peter Adkison, who owns the company headquartered in Seattle, Washington. Gen Con is a consumer and trade experience dedicated to gaming culture and community.

Well! That is something to see. I’ve always heard that Author’s Alley and the Writer’s Symposium are places to be. Perhaps I shall attend one day – haven’t been to GenCon since it left Milwaukee and I’m still paying off my DragonCon trips, but this might be worth planning for RBE for 2014.

Thanks for the kind words, Howard! The 2013 Symposium is shaping up to be our best yet, and we’re pretty excited about how it’s all coming together.