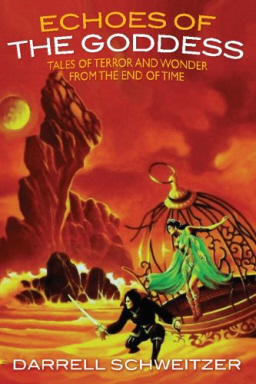 Imagine a golden treasure chest filled to overflowing with rare and sparkling jewels. Now imagine the literary equivalent of that bounty: The jewels are visions of a fantastic world filled with dark magic, dead gods, and exotic cultures.

The latest book from Darrell Schweitzer is a treasury of obscure tales woven into a single, epic tapestry of high fantasy. Echoes of the Goddess collects eleven stories set in the same weird world as Schweitzer’s second novel The Shattered Goddess (1982). However, Echoes is not a sequel to Shattered. Instead it serves as a prequel, and a fine introduction to both the world of Goddess and the superb fantasies of Darrell Schweitzer.

Echoes of the Goddess: Tales of Terror and Wonder From the End of Time was released by Wildside Press in February 2013, but it was literally decades in the making. All of these stories were written between the years 1979 and 1985. Wildside describes the book: “This is an Earth of the far future, when the planet has declined into chaos, and darkness looms at the end of human history. Here you’ll meet… a wizard’s shadow attempting to become a man; two sorcerers grotesquely transformed by their fratricidal hatred; a musician who becomes the lord of death; a boy-priest consumed by divine visions; and a witch who loves a god, and many others. Here’s strangeness, wonder, and terror in the tradition of Clark Ashton Smith’s Zothique or Jack Vance’s The Dying Earth.”

Nobody works in the “story cycle” tradition quite as well as Schweitzer does. While most of today’s writers focus on cranking out novels, he prefers the short story form and is one of the widely acknowledged masters of the form. Some of his previous story cycles have been collected as the books We Are All Legends and The Book of Sekenre. Yet the stories in Echoes of the Goddess represent the author in the formative stages of his career, when his imagination was raw and unbounded. This was years before he would go on to win a World Fantasy Award for co-editing Weird Tales with the late George Scithers, and well in advance of his “To Become a Sorcerer” novella being nominated for that same prestigious award.

The stories in Echoes of the Goddess include: 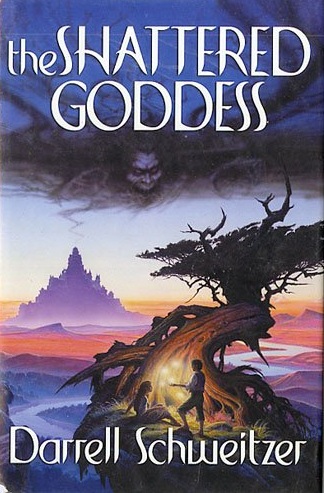 Most of these tales originally ran in small-press or indie publications, and they’ve never been collected into a single volume until now. Three of these stories appeared in AMAZING, one in FANTASY TALES, two in FANTASY BOOK, and five in the late, great WEIRDBOOK.

The artwork of Stephen Fabian has always been a perfect fit for Schweitzer’s lyrical, often phantasmagorical, storytelling. The book’s gorgeous wrap-around cover is an updated version of Fabian’s cover for Jack Vance’s The Eyes of the Overworld.

All of these stories take place before the events of The Shattered Goddess, but only the first of them [‘The Stones Would Weep’] was actually written first. I am now 60. We are talking about stories I wrote mostly in my late 20s. I think that might well be why they are… surprisingly romantic for me. ‘A Lantern Maker of Ai Hanlo’ [completed in March ’82] was the first substantial story that George Scithers ever bought from me (for Amazing). Then he put it on the cover. He got me an interior illustration by Tim Kirk because I asked for one, and it was obviously a good idea.

What sets a “story cycle” above a collection of unrelated tales is a sense of cohesion, continuity, and a resulting synergy. The whole of the reading experience becomes greater than the sum of its parts. “When you read these stories in the book rather than separately… there is an overall narrative structure that runs from ‘The Story of a Dadar’ through ‘The Stolen Heart.’ 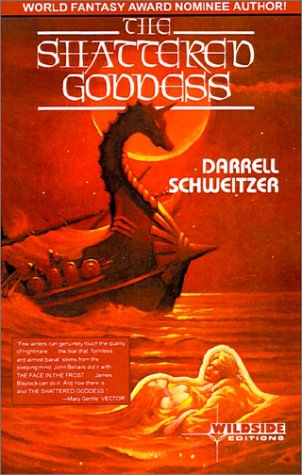 Schweitzer noted that “The Stolen Heart” has been substantially rewritten for this volume. “The revisions were mostly for style. I think the problem was that at the time I had paid so much attention wrestling with the abstruse concepts and labyrinthine plot [of this story] that I was rather careless about how things were phrased. It needed another draft. So, in 2012, I gave it one. This story required far more licking into shape than any of the others. And it did not occur to me that Black Veiada, the witch, was the same witch who initiates events in The Shattered Goddess. Someone suggested that to me in a writing workshop. It fits. I suppose she is, though I did not think of that consciously.”

There are also minor changes in “The Stones Would Weep,” specifically a toning down of the language a bit to make it less sentimental, and also replacing a shepard boy’s highly implausible lute (which would be wrecked the first time he got rained on) and with the more traditional lyre.

Now that readers have the opportunity to read Echoes of the Goddess and follow it up with The Shattered Goddess, Schweitzer says he could return to this fictional world again if the inspiration strikes.

I am left wondering if I could write another one of these [tales]. There are things which are unexplored yet. How did any of these characters (assuming they lived at the right time) fare during the apocalyptic events of The Shattered Goddess? There has been really very little interaction with the lost, ancient technology of the Dead Places, beyond a couple scenes in which ancient cities appear as mirages and [flashbacks] of airships in ‘The Stolen Heart.’ And of course I have written nothing about the post-human world after the events in the novel. I would not rule any of this out, although if you consider that I was a little short of 33 when the last of these stories was written, I would expect that any future attempts would read a little differently.

Echoes of the Goddess is available now at Amazon.com as a 274-page trade paperback.

The Shattered Goddess is available in both soft- and hardcover versions.

Thanks for the tip, I missed this news.

I need to read more Schweitzer – what I have read so far has been very good.

I wish Wildside Press had a cleaner webpage, though. It would be nice if they specifically had a Borgo Press subpage. They have a lot of interesting new & reprint things going on, but I keep learning word-of-mouth when I should just be getting the news direct from them.

More great books from a great author, and I love the cover for Echo!

Darrell has been underrated for decades.

I’m sure I first encountered Darrell’s stories in the late 1980’s/early 1990’s revival of Weird Tales (those digest-sized issues are still my favorite run of the revived magazine) but it wasn’t until I picked up an imported British paperback copy of Mask of the Sorcerer that I realized just how good he really is. Hoping for my copy of Echoes to arrive tomorrow and it’ll be going very, very close to the front of my reading list.