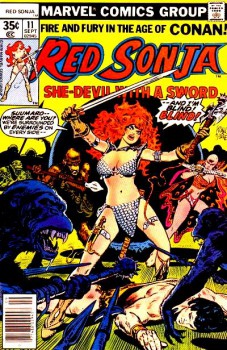 The story opens with Red Sonja and Suumaro in the talons of a giant peacock, being flown away from the ruins of the sorceress Apah Alah’s honeymoon suite. It was explained (though not very clearly) last issue, but to catch up with the story (and the series in general), all you have to know is that a lot of crazy things happen to Red Sonja and she usually ends up stabbing most of those crazy things. Oh, and she’s blind after being covered in the blood of a peacock-blowing man-stallion (seriously, not half as sick as you’re thinking).

If you’re honest with yourself, you know how you’d react to being blinded, then clutched in the talon of a giant peacock. I’d be terrified. Red Sonja’s first line this issue: “I’d hoped that when death arrived for me – I’d at least be able to see well enough to spit in its face!” And that’s really all you have to know about Red Sonja.

The giant bird drops them on the upper section of the palace, where they are greeted by a bald woman with a crossbow named Narca. It turns out Narca is angry at the bird for trying to take Sonja and Suumaro out of the palace (even though the bird wasn’t taking them out of the palace, just the crumbling part of it). So she shoots the giant peacock with her crossbow, then has her army of albino gorillas drag its corpse to a giant vat of blood, where it is dumped.

Why is she so mad about Sonja and Suumaro’s escape attempt? Because she’s trapped there too. In her own wing of the palace. With an army of gorillas. And a blood pit that she uses for demonic summoning. And this isn’t even the dumbest prison set-up I’ve seen in the series (see issue two).

Sonja can’t see Narca, but Suumaro tells her that she’s “purely evil,” which he seems to conclude from the fact that she’s bald and shot a big bird. Then she shoots a second giant peacock and has it tossed into the blood pit as well. Some demon is apparently very thirsty.

So Sonja and Suumaro are still standing on a balcony when Vasso (the friendly harpy companion to Marmo from last issue) perches nearby and relates an important message, specifically, “Mooro mi … sasa dusuga mi! Hoet hoet!” Suumaro can’t speak the language, but assumes it means, “He seems to want us to – to climb on his back!” Lassie couldn’t have said it better.

So they climb on Vasso’s back and are flown to still another balcony in the seemingly endless palace built on top of a giant tree. This one is occupied by the weasel-esque Marmo, now dressed in silk robes. Suumaro immediately puts a sword to Marmo’s throat (it was indirectly because of Marmo that Sonja is currently blind) and Marmo responds by calling Vasso to help him. When Red Sonja threatens to join the fight, Marmo responds with, “She is blind! She can’t hurt us!” And has there ever been an example, in all of adventure literature, when a blind warrior equaled a helpless one?

Sure enough, three panels later, Blind Sonja has driven her sword through the harpy’s back. So Marmo summons three more harpies to capture her. Once subdued, Sonja is brought before Marmo’s mistress, Narca. Except that he sent the first harpy to rescue Sonja and Suumaro from Narca, so why would he do that if he was working for Narca? I don’t know. This story stopped making sense a couple issues ago. So the two trade barbs for a couple panels and then Narca decides on the perfect death-trap.

She commands one of her ape-slaves, Fidi, to fill a giant smoking pipe with blood from the sacrificial pool. After doing it, Fidi then blows into the pipe, creating a giant blood bubble, large enough to fit Red Sonja inside. Once she’s in, the bubble hardens and starts to float away. It eventually comes down, resting just on top of the blood pool, where it slowly begins to sink in.

At this point, Suumaro gets his bearings enough to approach a gloating Narca and press his sword to her throat, threatening to kill her if she doesn’t free Sonja. The sorceress confesses that she can’t undo the spell. Meanwhile, Red Sonja is trying to shatter the hardened blood bubble with her sword, unaware that breaking it will just drop her into a pool of blood. Her efforts all come to nothing, however, since the blood bubble is not only unbreakable, but airtight. Sonja begins to suffocate in the bubble because, all of a sudden, science is relevant.

At this point, a green hand reaches out from behind one of the shadowed doorways and gestures toward the bubble, causing it to float off the blood pool and back on to the stone floor. The bubble dissolves, leaving Sonja able to breathe, but still blind.

Narca is so ticked off to see Sonja and Suumaro reunited that she decides to take it out on another giant peacock flying overhead. Once she shoots it, the blood of the peacock sprays over the courtyard below before it plunges into the pool. When some of the peacock blood splashes over Sonja’s eyes, her sight is magically restored.

Sure. OK. Moving on.

Narca threatens to kill a now-sighted Red Sonja. Two pages later, Narca is very dead. The ape-slaves bow to Marmo, who apparently inherits them by virtue of being the only one left standing who is without virtue. Sonja and Suumaro are ready to kill the jerk, when they are presented to the man with the green hand who saved Red Sonja: a ten-foot tall lizard man who tells them they will both be free of Apah Alah’s curse and rich as Turanian kings if they will help find The Emblem. And once again, Red Sonja sums up what I’m thinking with, “What in the name of a drunken pikeman is … The Emblem?”

Also, when did Apah Alah curse them? And wasn’t there a spy mission last issue that they kind of got side-tracked from? And is there some kind of guard or barrier that actually keeps everyone inside the castle, because so far I can’t figure out why everybody doesn’t just leave (except that it’s a castle and actually much nicer than the surrounding woods, mammoth-stinking fort, or tent village nearby). And, seriously, what does Red Sonja see in Suumaro? The answers to these questions might be revealed next issue (but probably not).

Hmm. I begin to think that you aren’t taking the adventures of Bikini Red entirely seriously.

I’m thinking this review is probably about ten times more entertaining to read than the comic itself (although the artwork looks pretty good).