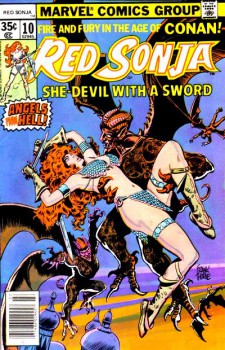 So this story opens with Red Sonja and the inexplicably-still-unslain Suumaro on a reconnaissance mission. They’re traveling by raft into the least-fortified part of Skranos to gather intelligence on its fortifications. After I wrote that sentence, I realized that if they already know what part of the city is least-fortified, then haven’t they already scoped out the fortifications?

Never mind. They never make it into the city this issue anyway. Before the first page is turned, Sonja, Suumaro, and the retinue of soldiers they brought with them are attacked by winged demon-people. Suumaro is all-too-familiar with the creatures, saying that his sorceress mother, Apah Alah, created them as guardians. Sonja asks what she used them to guard.

A better question might be what kind of spy mission includes the leader of the resistance movement, a woman who drunkenly challenged the entire army to kill her, a dozen armed men, and their horses? How exactly were they expecting to slip in unnoticed?

Again, never mind. We’ve got harpies to fight. Well, for a page and a half. The harpies (or whatever) kill all the other men, as well as the horses. (Have I mentioned how badly horses get treated in this series?) Leaving Red Sonja and Suumaro on the shore of a forest. Capping the trunk of one of the largest trees is a castle.

And since this Red Sonja, you guessed it. She freaks out for one panel, then moves on. Because mildly freaked out is just how she’s learned to function.

So Suumaro explains that the house on the tree was created by his sorceress mother as a sort of honeymoon suite. For some reason, being married to a sorceress just freaked out Suumaro’s father so much that he left her shortly after the honeymoon. So she did what any ex-wife would do. She cursed their honeymoon suite and set a pack of harpies to guard it.

Whatever. At some point, I guess we’re just supposed to run with it. So when they run into a sleazy-looking character named Marmo, they both listen to his ludicrous story of staying in the castle in a tree with a friend. The “friend” (who is never named) was abducted by something Marmo doesn’t describe. He’s been hiding out in the woods ever since, trying to think of a way to help his friend escape. Oh, and Marmo is accompanied by a harpy named Vasso, just because.

So, Sonja, Suumaro, Marmo and Vasso go into the castle built on top of a tree. (And don’t Marmo and Vasso sound like the names of the lost Marx Brothers?) The first thing they see are a dozen blind women weaving silk lace at looms. It’s an eerie image that’s never explained. Honestly, a dozen creepy women with “blue glass” eyes, weaving lace, are never mentioned again in the story. Moving on, they find shallow pits filled with soft, leathery eggs. I know what you’re thinking, but it turns out they’re not dragon eggs. Instead, they each glisten “like a pink jewel, marbled with lines of blue and green.” Sonja is so impressed by them that she puts one in her satchel (a move which, obviously, she’ll come to regret later).

Next, they find a ballroom so large that there is a miniature palace inside it. That’s right, a palace inside a castle on top of a tree. (Do you think everyone assumes Red Sonja is insane whenever she tries to recount any of this stuff?) She decides to take a peek through the key-hole to see what’s going on.

Inside the palace in the castle on the tree is a chamber filled with thousands of those leather eggs. And in the middle of them all is a horned centaur. Well, that doesn’t sound nearly crazy enough, so it’s also a horned centaur with one of those glass-blowing tubes. Except, instead of glass bubbles, the centaur blows out little pink leather eggs.

Much better. That’s the sort of thing Sonja’s used to facing.

Once Marmo gets a peak inside the chamber, he busts down the door because this is what he’s been looking for all along. It turns out the leering, evil-looking stranger wasn’t being honest with Sonja and Suumaro. He was just using them to help him get into the castle so that he could find and steal the eggs, which he believes contain priceless gems. Never mind that there are exactly zero traps and/or guards present, so that he could pretty much have walked in by himself and taken whatever. Never mind that they walked past pits filled with the leather eggs three pages earlier and he didn’t pick up a single one. No, this chamber, where the eggs are created, is what he’s looking for.

It makes sense in a way. I mean, a goose that lays golden eggs is going to be far more valuable than the eggs themselves, so obviously Marmo was looking for the egg-blowing centaur (that’s not obscene, it’s literally what he does). With the help of Sonja, Suumaro, and Vasso, he can trap the centaur and take it away, so that the creature will become a source of never-ending wealth for him. It’s a pretty smart plan.

Of course, that’s not Marmo’s plan. The first thing he does when he enters the chamber is stab the hell out of the centaur, taking out both its eyes and then cutting its throat. He then starts to gather up the little eggs, only to get even angrier when he finds out that the eggs aren’t really fancy leather containers for jewels. They’re just eggs. He figures this out when they start to hatch. Sonja pulls the egg out of her satchel and sees a miniature peacock born on the palm of her hand. Then they all start hatching, until the room is filled with tiny flying peacocks. As pets, these could be more valuable than gold and the four of them could go into business together selling them to the idle rich. Who wouldn’t want to own a pocket peacock?

But Marmo wanted jewels and he’s screaming at the little birds that he’s been cheated. He’s screaming so loud that he rouses the blinded centaur (whom everyone had just assumed was dead). Best line of the issue is probably a horrified Suumaro screaming, “Sonja – look! The man-stallion lives…!” For the full effect, type “man-stallion” into Google and see what you get (unless you’re at work, then DON’T do that).

The blinded man-stallion is reaching out, listening for the voice of the man who blinded him. His hands are covered with blood and everyone is staying very quiet.

Except for Marmo. He’s screaming at the centaur, taunting him. And why shouldn’t he, since Sonja is standing between him and his victim. Sure enough, the centaur grabs Sonja, thinking she’s Marmo, and smears blood on her eyes.

The blood makes Sonja blind and, while Suumaro is comforting her, Marmo slips away. Suumaro stabs the now-dead centaur a few more times, apparently to make him even deader. He places a hand on Sonja’s shoulder and guides her out of the castle. When he asks what blindness will do to her, Sonja utters another character-defining line of dialogue: “Either ended my life as a warrior – or perhaps given me a reason to be a greater fighter than ever.” Personally, I’d love to read a few issues of Red Sonja training with a blind martial artist to become the Daredevil of the Hyborian Age. But we’ll just have to wait and see how it turns out.

Meanwhile, the crazy quotient for the issue hasn’t quite yet been reached, so the story ends with the baby peacock that Red Sonja had held in her hand growing to the size of the castle and plucking up Red Sonja in its talon and Suumaro in its mouth. The giant peacock shatters through the castle and takes to the sky. Continued next issue, where no doubt things get even crazier.

Next Issue: Have We Met a Non-Crazy Sorceress Yet? Because We Won’t Be Meeting One In This Issue Either.

Have we met a non-crazy character yet? And I’ve had doubts for some time about the authors.

I definitely want someone to write a short story with pocket peacocks. I’m not sure yet whether I want it to be me.